The Young and the Restless Spoilers: Victoria Tries to Steal Rey from Sharon After Cancer – Loyal Detective Shuts Vickie Down? 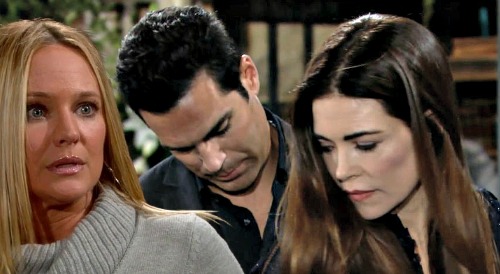 The Young and the Restless spoilers reveal that fans are still waiting on a pairing that was teased last year. Y&R viewers got a little taste of a possible romance when a storm led to a blackout. Rey Rosales (Jordi Vilasuso) got stuck with Victoria Newman (Amelia Heinle) at Newman Enterprises, so some serious chem testing was going on.

It seemed like Y&R was giving Rey and Victoria a trial run in case they wanted to pair them up. However, nothing ever happened with that – not yet anyway. Sharon Newman’s (Sharon Case) cancer diagnosis ultimately locked Rey into a long-term story with her.

Rey would look like a dirtbag if he bailed on Sharon at a time like this. Thankfully, Rey has been pretty much the best guy Sharon could ask for. Rey is patient, loving, kind, encouraging… He really is “Mr. Everything” like Mariah Copeland (Camryn Grimes) pointed out not too long ago.

Rey has been a huge help to Sharon during this breast cancer battle. Whenever Sharon gets overwhelmed, Rey’s right there waiting to keep her steady and focused. The Young and the Restless spoilers say Sharon will overcome her cancer, but what happens after that? Will Y&R finally bring Victoria into the mix?

Victoria was burned badly by Billy Abbott (Jason Thompson), so she’ll undoubtedly be looking for love again eventually. It’s easy to imagine Victoria and Rey building a true friendship that could grow into more. Victoria might find herself hoping she can steal Rey away from Sharon – obviously long after Sharon’s in remission and living her best life again.

Would Rey let himself fall for Victoria after everything he’s tackled with Sharon? Rey and Sharon have been through the fire together at this point. If Victoria tried to make her move, the loyal detective might shut her down hard. Rey has made it clear that Sharon’s his one and only. The thought of losing Sharon has made Rey think about just how much she means to him.

In other words, Rey might not be as tempted as Victoria would hope. The Young and the Restless may stick with Rey and Sharon for a while – simply because this cancer storyline has made their relationship so strong. As other Y&R news rolls in, stick with us for updates.

The Young and the Restless spoilers say Rey will continue to support Sharon following her surgery, so we’ll see where things go from there. Do you think Victoria could try to steal Rey away after Sharon’s recovery? Will Rey stay loyal to Sharon and keep building a future with her?

Don’t forget to stop by CDL regularly for scorching Young and the Restless spoilers, updates and news.