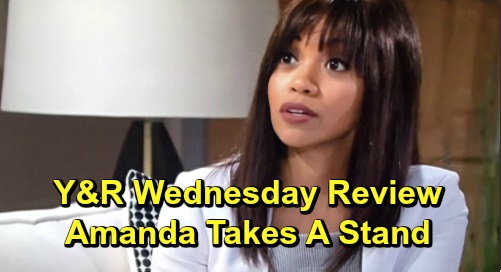 The Young and the Restless spoilers review for Wednesday, February 12, tease that Billy Abbott (Jason Thompson) and Amanda Sinclair (Mishael Morgan) will continue their conversation in the elevator at the Grand Phoenix. She’ll tell him that Rey Rosales (Jordi Vilasuso) arrested Ripley Turner (Christian Keyes) earlier, and he’ll think that a celebration is in order. He’ll push the button for the roof.

On the roof, Billy will stand on the ledge, while Amanda looks on, thinking it’s a little crazy. He’ll encourage her to let this be their crazy moment, and eventually she’ll go out onto the ledge with him. They’ll sit there together and note that they feel alive. Billy will share that he and Victoria Newman (Amelia Heinle) told the kids about their split earlier, but he’ll say that the split was the right thing to do.

Billy will then say that there’s one more thing they’re going to do…shout. Eventually he’ll cajole Amanda into screaming with him at the top of their lungs, and they’ll both agree that it felt great and cathartic. Amanda will get a text and say that she’s got to go before thanking Billy for helping her find her voice.

Later, Amanda will show up at Crimson Lights, where Rey will bring in Ripley to see her. Amanda will tell Ripley to sit down, to which he’ll reply, “Yes, ma’am.” She’ll tell him that the tables have turned and that his future is in her hands. He’ll say that he likes seeing her this strong and confident, and she’ll proceed to tell him that the police weren’t going to file the paperwork on his violation and that he could go but that if he comes near her again, then he’s going to jail.

Amanda will say that she wanted him to feel powerless like she once did, and that she wanted to witness it as he realized that she has all the power and he has nothing. Ripley will then ask if this is the influence of that new boyfriend of hers that barged in on them at the hotel. Amanda will deflect, saying that he is going to leave town, and she’ll hand him a one-way bus ticket back to Madison.

Amanda will then take off, and Rey will tell Ripley that she has done him a huge favor today. Ripley will then mutter to himself that “she’s not as strong as she thinks she is.” At any rate, this doesn’t look like the last that we’ll see of Ripley, as he’s clearly upset with Amanda and jealous of her relationship with that “new boyfriend” Billy.

Meanwhile, on the new episode of Y&R on Wednesday, February 12, Lola Abbott (Sasha Calle) will get a visit from Rey at her apartment. She’ll be taping up boxes of Kyle Abbott’s (Michael Mealor) belongings. Rey will support his sister and tell her that she doesn’t have to try to act strong. Lola will admit to being embarrassed, hurt, and angry, but she’ll say that she’s going to keep moving forward.

Rey will say that he’s proud of her, and she’ll say that she’s thinking of going away for a few days to see Celeste Rosales (Eva LaRue) in Miami. After Rey leaves, he’ll head to Crimson

Lights where he’ll bump into Kyle on the patio. Rey will try to hold back, and Kyle will tell him to go ahead and let him have it. Rey will proceed to read Kyle the riot act.

Rey will call out Kyle for pretending to love Lola when he was really pining for someone else, and he’ll wonder why Kyle went through all the effort with her. Then he’ll get it, saying that Kyle wanted Lola because she made him feel like a good person, when he’s actually a selfish, manipulative, entitled dirtbag. He’ll then leave, after telling Kyle to stay out of his way and out of Lola’s life.

Kyle will glumly head upstairs to pick up his things at the apartment. Lola will assume that it is Rey at the door knocking, but it will be Kyle. Kyle will mention his run-in with Rey, but Lola will say that she won’t apologize for her brother. Kyle won’t blame Rey for being protective of her. Kyle will note all the boxes and say that everything seems so final.

He’ll want to know if Lola will be all right, and she’ll say that eventually she will be. She’ll note that people seem to think that they can work it out and get past their issues, but that there was only one issue between them…Summer Newman (Hunter King). Lola will indicate that she knows the Kyle was with Summer last night, and Kyle will offer to stay for a while and talk, but Lola won’t want that.

Ultimately, they’ll decide to get a divorce quickly, which Lola will note should be easy since there were no children or a house involved in the marriage. Lola will wonder whether any of their relationship was real, and Kyle will say that it was real, it just wasn’t forever. Kyle will leave, and Lola will remember some of their good times as she cries.

Of course, Lola and Kyle might think that their divorce will be smooth and quick, and that would probably be the best for everyone involved. But will something happen to prevent a quick and easy divorce? A Lola pregnancy would certainly cause a major glitch in Kyle’s plans with Summer, and it would really cause complications for everyone involved in the situation. We’ll see what happens here, but right now things just seem too simple and easy.

There’s certainly a lot going on right now on Y&R, so make sure you stay tuned to the CBS soap. We’ll be sure to keep you updated on the latest Y&R news. Be sure to check back in with CDL for the latest on the Young and the Restless!