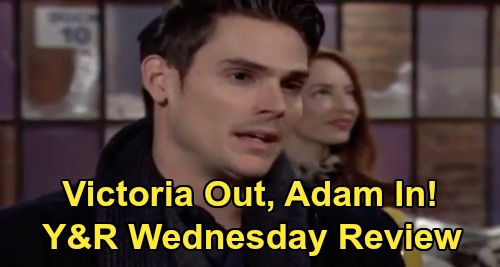 The Young and the Restless spoilers review for Wednesday, February 26, tease that Chelsea Lawson (Melissa Claire Egan) and Adam Newman (Mark Grossman) will enjoy their morning together. Adam will have been researching destination weddings, but he’ll think that they should get married at the farm in Kansas again. Chelsea will love the idea, and they’ll plan for a spring wedding.

Adam will also indicate his desire to return to Newman Enterprises to help while Victoria Newman (Amelia Heinle) is recovering. He’ll worry about it looking opportunistic, but Chelsea will encourage him to go for it. Later, Chloe Mitchell (Elizabeth Hendrickson) will come to see Chelsea, and she’ll encourage Chelsea to get back into fashion designing. Chelsea will seem excited about the prospect.

Meanwhile, at Society, Victor Newman (Eric Braeden) will fuss at someone on the phone while sitting with Nick Newman (Joshua Morrow). Nick will tell his dad that he’s working too much and that he needs to take care of his own health. Soon, Adam will call, wanting to meet with Victor. That will be Nick’s cue to leave, but he’ll warn Victor first not to let Adam take advantage of him.

Over at the hospital, Nikki Newman (Melody Thomas Scott) will read poetry to Victoria and talk to her lovingly. Nate Hastings (Sean Dominic) will update her about the latest on Victoria’s condition, saying that they’re in a “wait and see” mode right now. After Nate leaves, Sharon Newman (Sharon Case) will show up to check in on Victoria and Nikki.

Sharon will look exhausted, so Nikki will drive her back to the ranch. Once they leave Victoria’s room, Billy Abbott (Jason Thompson) will sneak in and cry at her bedside. He’ll take pictures of the kids and tuck it into the sheets around Victoria, then he’ll leave as he hears Nick approach the room.

Nick will sit with his sister and talk with her about how she needs to speed up her recovery, and about how Victor is trying to run the company. He’ll take her hand and tell her about Sharon’s cancer. He’ll nearly be in tears, saying that he can’t imagine a world without her in it, when he notices the photos of the kids in the bed. He’ll look around, thinking that Billy must have been there.

Meanwhile, Billy will sit alone out on the ledge on the rooftop of the Grand Phoenix, and Nikki and Sharon will talk a bit more at the ranch. They’ll discuss Sharon’s cancer battle, and Nikki will tell Sharon that she’s a warrior. They’ll decide to take care of themselves and get something to eat.

Next, at Jabot, Summer Newman (Hunter King) and Kyle Abbott (Michael Mealor) will try to work on the big Lafferty deal, but they’ll both be feeling distracted. They’ll each have daydreams about each other and struggle with their work, until finally Kyle gets a call saying that Lafferty is backing out of the deal for personal reasons. They’ll then get honest and admit that their minds haven’t been on their work, and they’ll leave for the day.

Finally, at the Grand Phoenix, Theo Vanderway (Tyler Johnson) will be surprised to see Lola Rosales (Sasha Calle), who will be there looking for Abby Newman (Melissa Ordway). Lola will share that she wants to open a restaurant in Miami, which will cause Theo a bit of panic since he doesn’t want her to leave.

Lola will reassure him that she’s not leaving Genoa City, and Theo will make up an excuse that he’d have missed her food. He’ll then have a business meeting with an associate, while Lola waits for him. Theo will be surprised that Lola waited for him, and she’ll say that she sensed he had something more to say to her.

Theo will hem and haw a little, then finally he’ll ask if he can take her out sometime, once she comes up for air with the divorce and everything she’s going through. He’ll tell her not to answer now, that he just wanted to let her know where he stood. Lola will smile and they’ll say goodbye for now.

Wednesday’s episode of Y&R sounds great, so be sure to stay tuned. We’ll give you updates as more Y&R news comes in, so stick with CDL for all of the latest Young and the Restless spoilers, updates, and news.