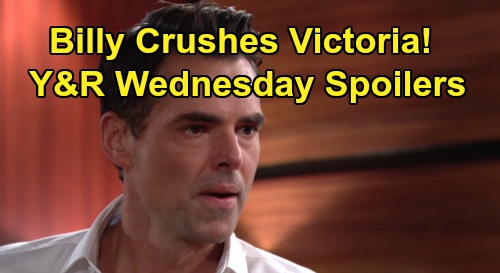 The Young and the Restless (Y&R) spoilers for Wednesday, January 29, tease that Billy Abbott (Jason Thompson) and Victoria Newman (Amelia Heinle) will face off. Y&R fans know Victoria recently demanded that Billy get help. Billy wants Victoria to accept him for who he is – flaws and all. He doesn’t see why that’s not an option, but Victoria just can’t take that leap of faith again.

On Wednesday, Billy’s resentment will grow stronger. He’ll be fed up with what he views as Victoria’s controlling nature, so that’ll lead to trouble. Victoria will be equally outraged when Billy admits he hit the dive bar instead of going to therapy. She’ll feel like her passionate speech meant absolutely nothing to Billy.

The Young and the Restless spoilers say Billy will decide he’s done with all this. He can’t be the man Victoria wants him to be – and he doesn’t want to try anymore. Billy will assure Victoria that he wanted to make her happy, but he’ll be unwilling to compromise this time.

Victoria will beg Billy to work through this with her, but Billy won’t think it’s possible. He’ll be looking for freedom he can’t get when he’s with Victoria. Y&R viewers can expect Billy to pack a suitcase eventually. He’ll move out within the next episode or two, so Victoria will be devastated over this “Villy” breakup.

Meanwhile, Victor Newman (Eric Braeden) and Nikki Newman (Melody Thomas Scott) will have a disagreement of their own. Of course, it won’t be nearly as heated as the one happening between Victoria and Billy!

Nikki and Victor’s marriage is in a good place, but that doesn’t mean they always see eye to eye. They’ll spar about something in Wednesday’s episode, so that could be “Villy’s” crumbling almost marriage.

Nikki may want Victor to butt out, but that’s not really his style. Victor doesn’t appreciate it when “Billy Boy” causes pain for his daughter, so he may insist on taking action.

Naturally, Victoria isn’t the only child for Victor and Nikki to clash over. There’s a chance this will involve Nick Newman (Joshua Morrow) and his decision to hang out with Sharon Newman (Sharon Case) more.

Victor may think it’s fine, especially since they’ve been trying to get Faith Newman (Alyvia Alyn Lind) settled back in Genoa City. Nikki, on the other hand, may struggle to let it go.

Sharon is actually battling breast cancer, but Nikki and Victor will remain in the dark on that for now. The Young and the Restless spoilers say Sharon’s secret will trickle out down the road, so it’ll be interesting to see how Nikki fits in.

We’ll give you updates as other Y&R news emerges. Stay tuned to the CBS soap and don’t forget to check CDL often for the latest Young and the Restless spoilers, updates and news.