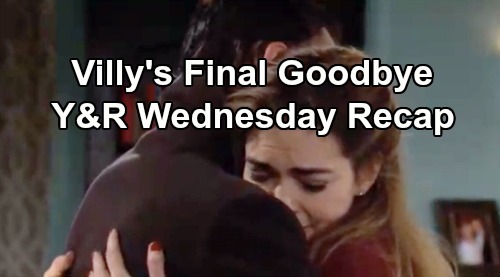 The Young and the Restless (Y&R) spoilers recap for Wednesday, January 29, teases that Billy Abbott (Jason Thompson) will reach out to Amanda Sinclair (Mishael Morgan). Y&R fans know Amanda recently ended their friendship, but that won’t stop Billy from trying! For those fans trying to watch new Y&R episodes check here. for information.

He’ll text to ask if there’s any chance Amanda will be at the Empty Glass later, but she’ll simply reply with “sorry.”

Meanwhile, Victoria Newman (Amelia Heinle) will head to the ranch. She’ll bring Nikki Newman (Melody Thomas Scott) up to speed on the Amanda situation as well as Billy’s plea.

Billy wants to be accepted the way Victoria accepts Victor Newman (Eric Braeden). After Victoria spills all, she’ll express uncertainty over what’s ahead.

Once Victoria exits, Victor will catch up with Nikki. He’ll think Victoria needs to give Billy the boot and will insist that his daughter deserves better. Nikki will point out that Victor’s grandchildren are involved here, but Victor will think Billy’s nothing but a punk and some type of middle-aged juvenile delinquent.

Next, Victor will get a visit from a private investigator. He’ll speak with the P.I. alone and will receive the photos that were recently snapped of Amanda with Billy.

Victor’s private investigator will note that this has been going on since before Christmas. He’ll mention that he learned something else about Amanda as well.

Other Young and the Restless spoilers say Victoria will come home to find Billy. Since the kids are with the nanny, they’ll have the place to themselves for a fierce faceoff.

Victoria will take jabs about Billy going to the dive bar and hoping Amanda would be there. They’ll get started on the therapy argument again, but Billy will stick to his guns.

Y&R spoilers say Billy will assure Victoria that he loves their life together, but he can’t deal with all the judgment. Victoria, on the other hand, will think Billy’s showing all the signs of relapse.

Victoria will ponder if maybe it’s her that Billy doesn’t want. Billy will think they always seem to end up right back in this situation, so he’ll ultimately pack a bag. He’ll give Victoria a hug before he heads out the door.

At the penthouse, Chelsea Lawson (Melissa Claire Egan) and Adam Newman (Mark Grossman) will be ready for date night – although Chelsea will fret about potentially bumping into Nick Newman (Joshua Morrow).

At Society, “Chadam’s” date will get underway. Adam will bring up the idea of getting an apartment in Paris. He’ll think they could use as it as their second home and explore Europe.

Just as Chelsea feared, Nick will walk in moments later. However, Chelsea will vow not to let this spoil the evening. After Adam gets up to take a call, Chelsea will mosey on over to Nick.

They’ll discuss the Paris plan as Nick remains uneasy over Adam and Chelsea’s relationship. Chelsea will point out that Nick’s the one who pushed her to reunite with Adam in the first place, so Nick will clarify his stance.

Chelsea will decide maybe they should head home and will step away from the brothers. That’ll leave Nick to admit maybe Adam and Chelsea could use a fresh start away from Genoa City.

Adam will bet Nick would like it if he left town. Their exchange will remain tense until Nick ultimately exits. Back at the penthouse, Adam and Chelsea will mull over Nick’s suggestion.

The Young and the Restless spoilers say Chelsea will admit moving wouldn’t be the worst thing in the world. Adam will start rattling off plans and how fast he could make them happen.

Chelsea will want Adam to pump the brakes, but she’ll think it’s sweet that Adam would turn his life upside down if she wanted. Adam will insist that wherever Chelsea and Connor Newman (Judah Mackey) are, that’s his home.

Later, Chelsea will listen in on Adam’s phone call to “Chance” Chancellor (Donny Boaz). Adam will note that his guy heard from “her,” but she’s been asking questions.

At the cottage, Sharon Newman (Sharon Case) will be unsettled by her online research. She’ll decide to get out for a while, so she’ll end up at the Grand Phoenix.

Sharon will sit at the bar with Phyllis Summers (Michelle Stafford), who’ll gush about her upcoming date with Chance. Phyllis will be taken aback when Sharon says she hopes Phyllis has a nice time.

Naturally, Phyllis will keep trying to push Sharon’s buttons, but it won’t work. Sharon will continue chatting in a pleasant manner, so Phyllis will be floored by this attempt at girl talk. As for Sharon, she’ll just want to concentrate on positivity.

While Sharon visits the ladies’ room, Nick will show up and get grilled about Sharon’s weird behavior. Phyllis will note that Sharon’s acting generous and sincere, but Nick will think that’s how Sharon always acts.

However, Phyllis won’t think Sharon’s generosity and sincerity normally extend to her. Y&R spoilers say Phyllis will look deep in thought after Sharon exits with Nick.

Upon returning to the cottage, Sharon will fill Rey Rosales (Jordi Vilasuso) in on getting overwhelmed earlier. She’ll feel like it was nice to go out and be around people who didn’t know about her diagnosis. Rey will embrace Sharon as she continues to struggle.

It sounds like another action-packed episode’s coming up. We’ll give you updates as other Y&R news emerges. Stay tuned to the CBS soap and don’t forget to check CDL often for the latest Young and the Restless spoilers, updates and news.