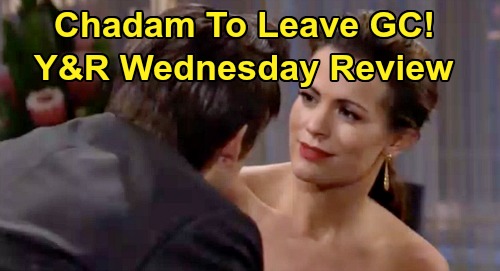 The Young and the Restless spoilers review for Wednesday, January 29, tease that Sharon Newman (Sharon Newman) will find herself needing to get out of the house after an internet search on breast cancer statistics turns up something upsetting to her. She’ll head to the Grand Phoenix, where she’ll find Phyllis Summers (Michelle Stafford) at the bar.

Phyllis will needle Sharon about her drink order of sparkling water, then brag about how she’s got a date with Chance Chancellor (Donny Boaz). Sharon will kindly wish her well on her date, then Phyllis will take a jab at Rey Rosales (Jordi Vilasuso).

Sharon won’t take the bait and will say that she just wants to focus on the positive, Ultimately, Phyllis will be confused and wonder what’s going on.

Meanwhile, at the Empty Glass, Billy Abbott (Jason Thompson) will mope around, eyeballing an ongoing poker game before glancing at the empty table where he and Amanda Sinclair (Mishael Morgan) used to talk. He’ll text Amanda to see if she’s coming, but she’ll decline. He’ll leave and head home, disgusted.

Over at the Newman ranch, Victoria Newman (Amelia Heinle) will unload her problems onto Nikki Newman (Melody Thomas Scott), spilling all the details about Billy’s friendship with Amana and their big fight. They’ll rehash all of Billy and Victoria’s problems, and Nikki will do her best to support her daughter.

After Victoria goes, Victor Newman (Eric Braeden) will join Nikki and proceed to denigrate Billy and openly worry about Victoria. Nikki will caution him to keep his feelings to himself when he talks with Victoria, as she’s feeling pretty raw about the problems she and Billy are having.

Later, a private investigator will visit with Victor and show him a photo of Billy and Amanda together before saying there’s something else that Victor should know about Amanda.

Billy will arrive back home, and Victoria will be upset that he went back to the Empty Glass rather than getting help. He’ll point out that he could get therapy for the rest of his life and it wouldn’t be enough for her.

They’ll go back and forth about the same old issues, and nothing will get resolved. Finally, Victoria will beg Billy go get help for the kids if not for her, and Billy will hit the roof, saying that she’s implying he won’t be there for the kids.

Ultimately, Billy will say that all he wanted was to make Victoria happy, but that he can’t be the superhero. She’ll implore him to keep trying, but he’ll say that he could say everything she wants, but in the end, she’ll never believe him. He’ll then pack a suitcase and after an emotional embrace, Billy will leave the house.

Next, Chelsea Lawson (Melissa Claire Egan) and Adam Newman (Mark Grossman) will head to Society for date night. They’ll talk about future plans over dinner, with Adam suggesting that they make Paris their second home.

Chelsea will love the idea, and they’ll be talking happily when Nick Newman (Joshua Morrow) shows up for takeout.

When Adam has to take a call, Chelsea will approach Nick and after some small talk, Nick will get a dig in about Chelsea going to the dark side. Through their conversation,

Chelsea will mention possibly leaving Genoa City, which Nick will think is a great idea, since Connor Newman (Judah Mackey) and Chelsea could get out from under Adam’s reputation around town.

Back at their penthouse, Adam and Chelsea will talk about their run-in with Nick, and Adam will suggest that they try to move to Paris soon – even as early as Valentine’s Day or St. Patrick’s Day.

Chelsea will think that’s awfully quick, but she’ll be happy that Adam would upend his life for her and Connor. Adam will say that wherever they are, that’s where his home is.

Later, when Chelsea’s out of the room, Adam will place a call to Chance, saying that “my guy finally heard from her, but she is starting to ask questions, so I just wanted to give you a heads up.” He won’t see Chelsea quizzically listening from the staircase.

Back at the Grand Phoenix, Nick will arrive, and Phyllis will question him about what’s going on with Sharon, who will have stepped away to the ladies’ room.

Phyllis will note that Sharon is being kind, generous, and sincere, and that she just doesn’t understand it. Sharon will return and say a pleasant goodnight to Phyllis, who will remain weirded out.

Later at home, Sharon will tell Rey about how she made the mistake of going online and digging deeper into various treatments, and she ended up seeing more than she wanted to.

Sharon will lament that she needed to get out, but she can’t really get away from the cancer, since she carries it with her everywhere. Rey will offer her comfort, gently holding her.