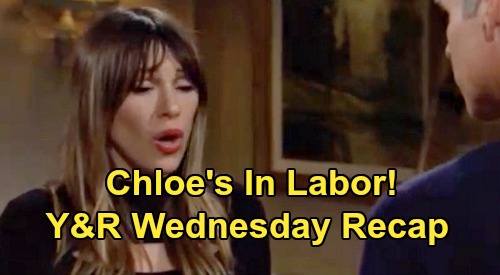 The Young and the Restless (Y&R) spoilers recap for Wednesday, March 4, teases that Billy Abbott (Jason Thompson) will pay Amanda Sinclair (Mishael Morgan) a visit. After Billy appears at Amanda’s hotel suite, she’ll get annoyed with him. Amanda will remind Billy that she wanted to be left alone, but he’ll protest that he just wanted to check on her.

Even so, Amanda won’t like everyone treating her like she’s so fragile. She’ll also feel like Billy used her as an enabler during their time together. Amanda will point out that Victoria Newman (Amelia Heinle) could’ve died because of their friendship.

Billy will understand Amanda’s frustration, but he’ll admit he thought maybe she was his answer instead of his enabler. Amanda will look thoughtful as Billy reaches over to take her hand. Meanwhile, Abby Newman (Melissa Ordway) and Chance Chancellor (Donny Boaz) will face some interruptions and problems. Once they’re resolved, Abby will want to express her gratitude to Chance for pitching in.

Chance will grin and assure Abby that she’ll get no complaints from him. Y&R spoilers say Abby will shove Chance back on the bed as they prepare to make love. At Jabot, Ashley Abbott (Eileen Davidson) will catch up with Jack Abbott (Peter Bergman). He’ll be glad Ashley could return from Paris again so soon after her last trip home.

Although the ice storm’s keeping them at the office for now, Jack and Ashley will want to visit Dina Mergeron (Marla Adams) when it’s safe. However, Jack will warn Ashley about what to expect. Dina has declined a great deal and doesn’t have many lucid moments. She even has times when she’s scared of Jack, which has been hard for him.

Once Ashley steps out of the room, Jack will have a vision of Dina in the CEO chair. Dina will pass along some advice to Jack, who’s worried about her looming death. The Young and the Restless spoilers say Dina will note that Jack’s gone on without her before. She’ll think he can do it again, especially if he seeks John Abbott’s (Jerry Douglas) guidance.

Afterward, it’ll be Ashley’s turn for a heart-to-heart with a vision of her mother. Dina will point out that Ashley’s biological father doesn’t matter; she’s an Abbott and should lean on her siblings. Next, Ashley and Jack will hang out a bit more. They’ll discuss family and how much Ashley misses theirs.

Y&R spoilers, news and updates say Chloe will face some pain that’s eventually followed by more. She’ll exclaim that she thinks she just had a contraction.

At Society, Theo Vanderway (Tyler Johnson) will wait for Lola Rosales (Sasha Calle) to make sure she gets home safely in the storm. Lola will wonder if Theo’s motives are really that pure. They’ll get flirty and nearly kiss, but Summer Newman (Hunter King) and Kyle Abbott (Michael Mealor) will catch them off guard.

After Kyle and Summer explain that their car got stuck, Lola will lead Summer away to help her dry off. That’ll leave Theo and Kyle to bicker about the situation. Kyle will insist this is the last place on earth he wants to be. Theo will contend that next time, Kyle should try harder to find a better place to wait out the storm.

Since Kyle just expected busboys cleaning up, he’ll let Lola know he didn’t mean for this to happen. Lola will understand and hope they can make the best of it. She’ll serve up some wine and offer food, although Kyle won’t want to put her out. Lola will suggest it’s no trouble, but Theo will snark about them crashing Lola’s restaurant and letting her cook for them.

In the kitchen, Theo will join Lola and wonder what he can do to help. Lola will grab Theo and pull him into a passionate kiss. She’ll eventually shove Theo up against the fridge before they come up for air. Theo will get that Lola’s using him to relieve the tension of the evening, but he won’t care.