The Young and the Restless Spoilers: Week of March 16 – Rey Stumbles Upon a Secret – Colin Trouble Brewing – Tessa’s Forgiveness Coming 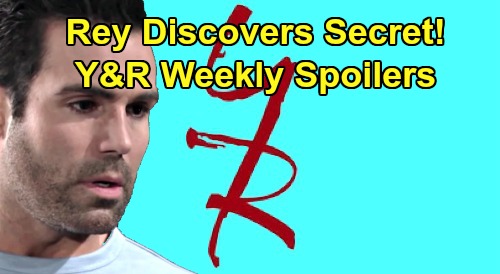 The Young and the Restless (Y&R) spoilers for the week of March 16-20 tease that some big surprises are in store. One of them will involve a blast from the past for Adam Newman (Mark Grossman). He’ll make a startling discovery along with Chelsea Lawson (Melissa Claire Egan), which should involve the debut of a new character.

Maria DiDomenico will make her first appearance as Alyssa Montalvo, a childhood pal of Adam’s. It looks like Adam and Chelsea will bump into Alyssa during their stay in Kansas. Back in Genoa City, Rey Rosales (Jordi Vilasuso) will face a shocker of his own. He’ll stumble upon a secret, so what’s this all about?

Rey’s pretty much become Sharon Newman’s (Sharon Case) sidekick lately. He doesn’t do much besides support Sharon, but that’s certainly important since Sharon needs all the support she can get! Will the secret Rey learns tie in with Sharon or will Y&R let him branch out into another story?

Rey knows about Adam and Chance Chancellor’s (Donny Boaz) connection in Vegas, so he’d be interested in learning more about that. Chance has been working hard to get rid of Phyllis Summers’ (Michelle Stafford) leverage and keep this secret under wraps, but there’s always the potential for more spillage.

Other Young and the Restless spoilers say Phyllis will have to hide her trail. Y&R fans Phyllis is always doing something she shouldn’t be doing, so this is to be expected.

If there even comes a time when Phyllis isn’t covering her tracks, pigs will be flying. No matter what Phyllis is hiding in the week ahead, she’ll probably set herself for more trouble.

Speaking of trouble, Billy Abbott (Jason Thompson) will land in some of it. His risky behavior will catch up with him somehow, which could pose a problem at Billy’s new job. Since Billy’s partnering up with Lily Winters (Christel Khalil) at Chancellor’s media division, he’ll have to start focusing more on work and less on freedom.

Over with Adam again, he’ll do something that raises red flags for Victor. The Young and the Restless spoilers say Adam will start grilling Victor about his history, which could be why this issue pops up.

Victor will question Adam’s motives as well as Adam’s looming perspective shift. He may assume Adam has softened as some sort of ploy, which may be true since Adam has been craving payback.

Next, Theo Vanderway (Tyler Johnson) will get another warning from Jack Abbott (Peter Bergman). Jack always seems to be giving those out when it comes to Theo, but he won’t hesitate to do it again.

He’ll want to tame Theo’s wild side a bit – perhaps due to whatever Theo has in store for Dina Mergeron (Marla Adams). We know Theo will make some sort of gesture for his dying grandmother soon.

In the meantime, let’s talk about Mariah Copeland’s (Camryn Grimes) epic screwups. She hurled accusations at Tessa Porter (Cait Fairbanks) and said some extremely hurtful things during that fight at their apartment. There’s also the matter of Mariah’s betrayal with Lindsay (Kirby Bliss Blanton), so it’s easy to see why Tessa hasn’t been returning Mariah’s texts or calls.

Y&R spoilers say Mariah will make her way to the city Tessa happens to be in. She’ll convince Tanner Watts (Chase Coleman) to let her on the jet, where she’ll come clean about all the drama she’s been dealing with.

Of course, Mariah will express remorse for sleeping with Lindsay and hope she still has a shot at fixing this. Tessa will be awfully overwhelmed by everything Mariah confesses, so it may not be that simple. The Young and the Restless spoilers say Tessa will offer forgiveness at some point, but it could take a little more work to get there.

Finally, Chance will have some troubling updates for Jill Abbott (Jess Walton). It seems likely those updates will involve Colin Atkinson (Tristan Rogers). Y&R fans can expect Colin’s money laundering scheme to be exposed in the near future. He should be arrested around the end of the month, so Chance may deliver news that sets that up.