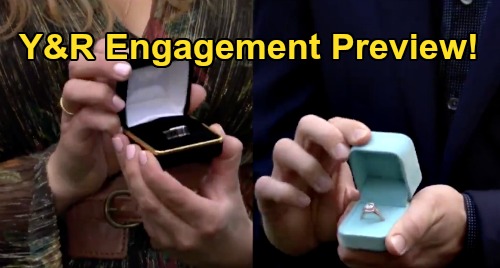 The Young and the Restless (Y&R) spoilers preview teases that Summer Newman (Hunter King) will have a couple of major outbursts to deal with during the week of September 21…from her parents.

As Y&R viewers know, Summer and Kyle Abbott (Michael Mealor) had a romantic but secret engagement at the Grand Phoenix last week, when they decided that their plans definitely included marriage and happily ever after together.

Well, this week, Kyle and Summer are going to make their engagement official by each proposing marriage to the other. As it will turn out, Kyle will be ready to get down on one knee and pop the questions with an actual ring, but Summer will have the same thing in mind.

In a fun turn of events, Summer will have bought an engagement ring for Kyle, and she’ll be planning to propose as well.

As they stand in Chancellor Park, Summer and Kyle will each get on bended knee and say, “Will you marry me?” Each will happily accept the other’s proposal, and the engagement will be ON.

But despite the big formal happening, Summer and Kyle will want to keep their engagement under wraps, at least until Kyle’s divorce from Lola Rosales (Sasha Calle) is finalized.

Summer and Kyle will want to be sensitive to Lola’s feelings, plus they’ll realize that they will probably get some big push back from their family – specifically from Nick Newman (Joshua Morrow) and Phyllis Summers (Michelle Stafford) – if they carry on about their engagement before Kyle’s even divorced yet.

Although Summer and Kyle know that their relationship is the real deal, they know that from the outside it might look a bit rushed.

Summer will be wearing the ring on a chain around her neck, and when she bends over to pick something up off the floor, the ring will come spilling out.

“It’s a ring, Oh God, no, no,” Phyllis will say, obviously panicking at the idea of Summer marrying Kyle again. But the really tough part for Summer will come when Nick finds out about the engagement.

Phyllis won’t be able to keep the engagement from Nick at this point, so he’s going to hear about it, and it won’t be a good scene.

From the looks of the promo, Nick is going to go all “judgy” on Summer, declaring that Summer will marry Kyle over his dead body, and telling her that this is only going lead to heartache, misery, a waste of time, and eventually another divorce.”

Yikes – that’s really not what Summer will want to hear, and one wonders how she’ll respond from there.

This could go a couple ways. First, Summer could get upset and flee the scene. Given the look of misery on Summer’s face as Nick is on his tirade, this could be the way that things go. Summer could be so hurt by Nick’s disapproval that she doesn’t fight back, at least in the moment.

Of course, Summer could have an angry response, which she’d actually be entitled to, since Nick is really no beacon of happy relationships. Nick and Phyllis haven’t been what one would call successful when it comes to marriages and relationships in the past, so should Nick really be talking here?

Summer would be within her rights to point that out to her dad.

We’ll see how it all turns out, but we suspect that Phyllis is going to have a real time as she becomes the go-between for Summer and an irate Nick. And just wait until Nick gets in the same airspace as Kyle – that could get contentious!

Maybe as the week wears on, Nick will calm down and realize that Summer and Kyle getting married isn’t that big of a step beyond moving in together. Do you think Nick will eventually come around and bless Summer and Kyle’s union?

It looks like we’re in for an exciting week, so stay tuned! We’ll give you updates as Y&R news comes in. Stick with the CBS soap and don’t forget to check CDL frequently so you don’t miss any of the latest Young and the Restless spoilers, updates, and news.

Are wedding bells in #Skyle‘s future? 🔔 See what Nick and Phyllis have to say about that… #YR is new this week on @CBS and @CBSAllAccess. pic.twitter.com/2V3JLlM8RG