The Young and the Restless Spoilers: What Happened To Michelle Stafford – Phyllis Summers Glamour Photos

BY Sean O'Brien on May 8, 2020 | Comments: Leave Comments
Related : Soap Opera, Spoiler, Television, The Young and the Restless 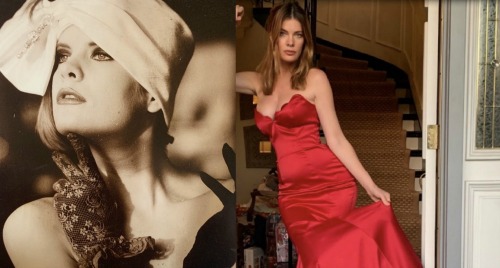 Aside of the appealing photo Stafford said, “More…in cleaning the garage! Some pics from early days modeling! LOL!! Man, I didn’t really work that much as a model until I dyed my hair red. It was sometimes SO red like in the last pic! I mean… no disrespect… but I have a great likeness to Carrot Top… just sayin..Oh man!! So serious…Such an itty bitty baby!!”

Y&R fans know that Stafford joined the cast of the show in 1994, when she first played an obsessive fan of Danny Romalotti (Michael Damian). Jack Abbott (Peter Bergman), who became one of her loves, later dubbed her Red.

Stafford’s social media Instagram following numbers almost 200,000. That digital platform allows those in the entertainment industry to serve as their own promotional agents if they so choose.

Being able to project images, videos, and written messages at one’s option allows Stafford to share personal parts of her life with the audience she’s created. This form of freedom breaks from the past, when star’s personas were often shaped by agents and the companies that employed them.

Young And The Restless Spoilers – Building A Successful Career

According to the Internet Movie Data Base (IMDB), Stafford’s father was an attorney and her mother was an executive at Universal studios. She grew up in Los Angeles, California, began to pursue an acting career and landed her first role in the television series Tribes in 1990.

Stafford’s major acting break came when she landed the role of Phyllis in 1994, which was initially supposed to be a short-run supporting part. But her performances were so strong that Y&R boosted Stafford to regular contract status through 1997. That actor chose to voluntarily leave the cast that year and star in Pacific Palisades, which was a nighttime soap opera.

After appearing in a number of television shows and movies, Stafford returned to the cast of Y&R in 2000. She reprised Phyllis, capturing her second Daytime Emmy Award in 2004 (with the first earned in 1997), until making another voluntary exit in 2013.

Stafford joined the cast of General Hospital in 2014 and played Nina Reeves through 2019.

Young And The Restless Spoilers – The Original And Iconic Red

Gina Tognoni (Phyllis) had a solid run as this character, earning a Daytime Emmy for her performance in 2017. But the original Red would return before the decade ended.

Stafford’s departure from GH last year led to her rehiring at Y&R, which surprised and delighted the fans. They’ve since witnessed the reversion of Red to her fierce personality.

As Stafford’s words on Instagram revealed, her hair isn’t naturally red, no neither is Phyllis’. Yes, that’s just one reason why it’s called show business.