The Young and the Restless Spoilers: What Is Theo’s Endgame? – Lola’s Feelings For Kyle Persist, Summer Threatened 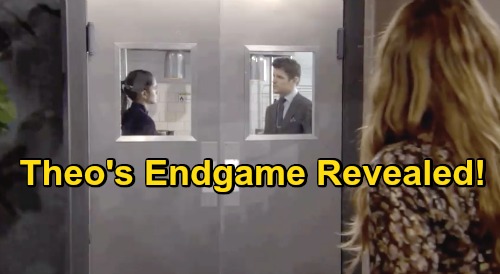 The Young and the Restless spoilers document that Theo Vanderway (Tyler Johnson) seems to believe Lola Rosales (Sasha Calle) is still in love with Kyle Abbott (Michael Mealor). She didn’t want to hear it. But knowing Theo, he won’t back off.

It’s reasonable to wonder, as Summer Newman (Hunter King) is doing, what Theo’s endgame is? He could be hoping that Lola, who he seems to actually care about, returns to him in time.

Well, the Kyle and Lola divorce is final. Lola and Kyle commiserated about that plot point at Society, with Theo being aware of the meeting and directing Summer so she could observe the exchange.

It appears as though Theo is right about Lola’s lingering feelings for Kyle. Mealor’s character was her first true love and her first husband. As for Theo’s implication that Kyle still cared, that’s debatable.

Whether Theo actually thinks that Kyle isn’t over Lola is highly questionable because Johnson’s character is the person who, like Summer, regularly critiqued Kola for months. The brief couple that was Theo and Summer didn’t believe that Kyle and Lola belonged together, with their instincts, or desires, proving to be right.

Young And The Restless Spoilers – Kyle Abbott Must Prove Himself

Viewers can see that Kyle actually did love Summer all along. The tension he exhibited toward Theo’s many baits was steeped in the internal feelings he had about Lola.

Kyle did fall in love with Lola. But the depth of his attachment never seems to have been what it once was and now is again for Summer. King’s character is the perceived, or actual, love of Kyle’s life.

A small space for speculation, regarding Skyle’s sustainability, is being left due to the sudden end of Kola. It’s okay to remain somewhat skeptical about Kyle’s evolving outlook on his romantic life until he proves his commitment to Summer over time.

Theo is Dina Mergeron’s (Marla Adams) grandson. So, he’ll be forever linked to Genoa City, Wisconsin, no matter what the future brings. But he’s still an outsider, according to his own perception and that of others.

First impressions haven’t been good. But Theo’s uncle, Jack Abbott (Peter Bergman), sees good in him. As long as there are enough other open-hearted people in GC, Theo can improve his reputation over time. He needs to earn that status, however.

If Theo is simply lashing out at Lola, who dumped him recently, then he’s wrong. But if he really wants the best for her, then she’ll recognize that and they’ll reestablish their friendship. As far as another edition of Theo and Lola, time will tell.