The Young and the Restless Spoilers: Will Adam Newman Get In Touch With Ian Ward – Epic Villain Returns On New Y&R Episodes? 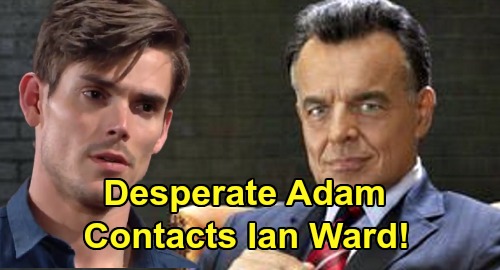 The Young and the Restless spoilers document that Adam Newman’s (Mark Grossman) need to defend himself could force him to make an unthinkable choice. Would Adam actually reach out to Ian Ward (Ray Wise), who was last seen when he was being hauled off to jail by Dylan McAvoy (Steve Burton) in 2016?

Well, this is Adam. The belief that his father, Victor Newman (Eric Braeden), hasn’t been protecting him since the terrible Kansas incident took place decades ago is outrageous on its face.

With that viewers know that anything is possible, meaning that Ian’s diabolical assistance can be tapped even though he’s believed to be behind bars. As the legal walls begin to close in on Adam, for the act he committed in Las Vegas, Nevada, he’ll be flailing for any assumed edge that can be gained.

Devoted viewers recall that Adam cloaked his identity as Gabriel Bingham when contacting Ian during the mid part of the last decade. That storyline involved the Newman Enterprises computer system being infiltrated, with the goal of paralyzing the company.

An eventual climatic scene had Ian and Adam clash at Newman Enterprises. Ian set the building on fire. The confrontation led to Adam’s realization that his plan had gotten out of control and he rightly chose to stand by Victor. Ian and Adam then tried to kill each other.

Ian was aided by another person who held a grudge against the Moustache, Patty Williams (Stacy Haiduk). That pairing represented one of the more dynamic dysfunctional duos in Y&R’s history.

Wise can be categorized as a character actor. But that phrase could be seen as limiting all that he’s accomplished.

The actor, who was born in 1947, has earned five awards from various organizations in a prolific career that began in 1970 on the soap opera Love of Life, where he was part of the cast for a number of years. His second credit also came in daytime when he joined Days of our Lives in 1982.

The actor earned numerous television and movie credits through the years before being cast on Y&R in 2014. He’s gone on to earn many more since then.

One of Wise’s referenced five awards came in 2015, when he won the Daytime Emmy Award in the Outstanding Special Guest Performer in a Drama Series category. Donna Mills, General Hospital, and Fred Willard, The Bold and The Beautiful, shared the award with Ward as co-winners.

Young And The Restless Spoilers – Next Time Is The Charm?

Adam and Ian would enter their next collaboration with no love lost for each other, simply seeking to use their bitterness against Victor, who is a perceived common enemy. Of course, Victor is actually only Ian’s foe.

Adam is still gripping the exaggerated notion that he and his mother, Hope Wilson (Signy Coleman), were abandoned by Braeden’s character decades ago, when they were not.

Of course Nikki Newman (Melody Thomas Scott) would be drawn back into this projected arc. Hopefully, Paul Williams (Doug Davidson) would be written into the script as well, as he and Nikki’s lives were upended by Ian during that mega villain’s last trip to Genoa City, Wisconsin.

Would like to see the great villain Ian Ward back in Genoa City when new Y&R episodes resume? CDL is a leading source for everything linked to The Young and the Restless. Check back regularly for Y&R spoilers and news!