BY Heather Hughes on July 7, 2020 | Comments: Leave Comments
Related : Days of Our Lives, Soap Opera, Spoiler, Television, The Young and the Restless 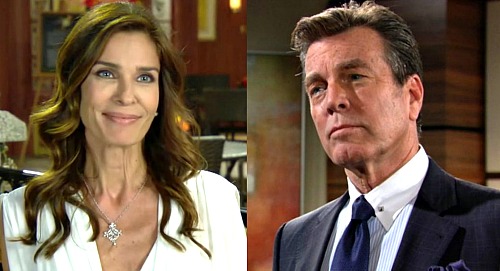 The Young and the Restless (Y&R) spoilers tease that Jack Abbott (Peter Bergman) is still searching for love after all these years. Jack has fallen hard many times, but his relationships just never seem to last. Y&R could let Jack reunite with Phyllis Summers (Michelle Stafford) after her romance with Nick Newman (Joshua Morrow) implodes, but that may not be the best idea.

After all, if Phyllis can’t make a reunion work with Nick, she may not be able to make one work with Jack either. Jill Abbott (Jess Walton) seems like another “been there, done that” pairing for Jack. Revisiting Jack’s old relationships just feels like a way to set him up for more heartbreak.

Maybe instead of looking back, Jack should look to the future – a future with a brand-new woman! Should The Young and the Restless cast a new leading lady to work with Peter Bergman? It seems like a great plan, especially if they snatch up a popular Days of Our Lives star.

DOOL’s Kristian Alfonso recently announced she’s already filmed her last episode as Hope Brady. Alfonso will make her onscreen Days exit this October, but what comes next? Would Alfonso be open to doing another soap? Alfonso might be willing to join the Y&R cast for the right role and offer.

If Alfonso hopped over to The Young and the Restless, she could easily play a new love interest for Jack. Y&R fans will recall how close Jack and Lauren Baldwin (Tracey E. Bregman) were getting last year.

It seemed like the show was building toward an affair storyline that thankfully got dropped. There was no need to destroy Lauren and Michael Baldwin’s (Christian LeBlanc) marriage over that.

However, Alfonso has that same powerful, elegant vibe going on. They’re also around the same age since Bergman is 57 and Alfonso will turn 57 in September. It’s easy to imagine Alfonso coming on the scene as a new executive for Jabot – or perhaps a designer that Jack strikes up a partnership with. It’d be easy for Y&R to let a new love story bloom.

Alfonso seems like she’d have excellent onscreen chemistry with Bergman, so it’s worth considering this possibility. Would you like to see Kristian Alfonso join the cast of Y&R? Could you see Alfonso playing Jack Abbott’s next love interest? We’ll pass along updates as other news comes in.