The Young and the Restless Spoilers: Will Ray Wise Return as Ian Ward – Y&R Villain’s Comeback Needed in Genoa City? 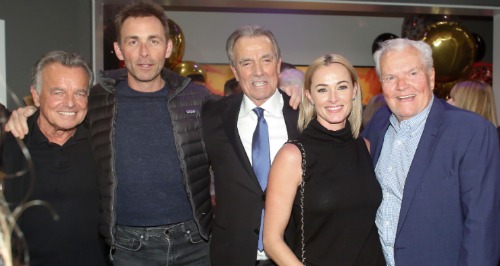 The Young and the Restless (Y&R) spoilers reveal that many special guests were on hand for Eric Braeden’s (Victor Newman) 40th anniversary celebration at CBS. However, there was one former costar in particular we want to talk about: Ray Wise (Ian Ward). It’s nice to know Wise is still connected to the show and can be part of events like this.

Of course, events like this can also serve as catalysts for comebacks. When someone’s around and talking to the right people, it sometimes gets the ball rolling on a return stint. Could that be the case with Wise? Will he reprise his role as Ian Ward and stir up some trouble in Genoa City once again?

If there was ever a time for Ian to strike GC, it’s now. We’ve got schemers like Phyllis Summers (Michelle Stafford) floating around. We’ve also got misunderstood bad boys like Adam Newman (Mark Grossman) and Theo Vanderway (Tyler Johnson), but where are the true villains?!

Y&R needs someone who’s capable of sinking to a truly evil place – and Ian Ward could certainly do that. He’d fill that villainous void. The Young and the Restless could use a real jolt of drama right about now, so why now throw Ian back into the mix? He’s the perfect character to shake things up and convince any fans who have strayed to tune back in.

Devon Hamilton (Bryton James) recently warned Adam about appreciating Victor, who isn’t perfect but is still his father. Although Victor and Adam have made progress in their relationship, perhaps they need a project to tackle together.

Fighting off Ian as a father-son duo might be a good way for these Newmans to truly reconnect.

Victoria Newman (Amelia Heinle) is set to suffer serious injuries thanks to Ripley Turner’s (Christian Keyes) shocker at the end of Newman’s gala. It looks like Nick Newman (Joshua Morrow) will step in as CEO while Victoria’s out of commission, but Victor will pitch in more as well. That’ll bring a bit of a war with Adam at Dark Horse, but Ian is a far bigger enemy to conquer.

Would you like to see all the Newman men come together to defeat Ian? Naturally, we’d want Ian to have fun making mischief first! He’s a great villain, so his return would be welcomed by many Young and the Restless viewers. We’ll be waiting for any updates or news that might seal the deal on a return.

Do you think Ray Wise will make a comeback as Ian? What kind of storyline would you like to see? You can always stop by CDL for exciting Young and the Restless spoilers, news and updates as the action heats up.