BY Dorothy Gale on March 17, 2020 | Comments: Leave Comments
Related : Recap, Television, This Is Us, TV 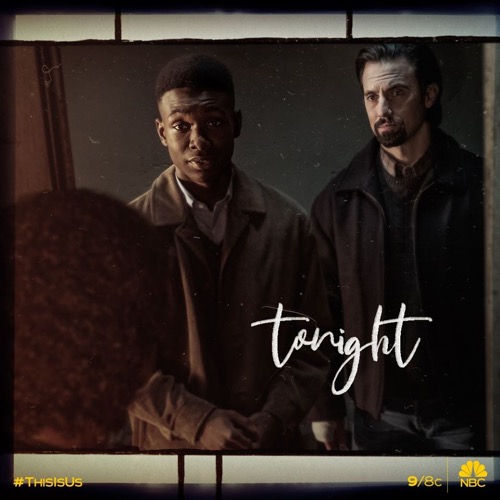 Tonight on NBC their honest & provocative dramedy series This Is Us airs with an all-new Tuesday, March 17, 2020, episode and we have your This Is Us recap below.  On tonight’s This Is Us season 4 episode 17 called, “After The Fire” as per the NBC synopsis, “Randall reflects on what could have been.”

Randall hasn’t stopped thinking about it, since he asked his brother, “don’t you ever wonder what would have happened if dad didn’t die,” Kevin says no.

We look back to their childhood when the house was on fire. Jack is ok, he suffered a little of smoke inhalation, but he is fine. They are staying at Miguel’s house. Rebecca is alone with Jack and she tells him that it makes you think. They go downstairs to talk to Randall, Rebecca tells him that when he was a baby she met his birth father. She says he was hanging around the hospital and she followed him back to his apartment. He was not well, he was an addict, she got out of there and never said anything to anyone.

She tried to go back, but he wasn’t there. Randall is upset, all these years she kept a secret from him. She tells him that his name was William Hill. She says she doesn’t know where he is. Randall wants to go see if he is there, Jack offers to go with him. They arrive at the door, Randall knocks on it and William answers. Randall introduces himself and tells him that he thinks he is his son. They go inside and sit down. Randall asks him to tell him more about his biological mom.

Wiliam says she was a warm drink right to your soul. She stopped using the moment she got pregnant, but afterward, she lost her battle. He assures Randall that he was not wanted. He wrote some things for Randall and gives them to him. Randall and Jack leave, Randall wants to return again. Jack tells him that it looks like William may be still using and he doesn’t feel good about his son spending time with him. Randall reminds his father that he is an addict too. In the end, William and Jack go to AA together.

Present-day, Randall is talking to his therapist, he says he hasn’t stopped thinking about what would have happened if his dad didn’t die.

Randall tells his father he is changing colleges to spend more time with him. At college, Randall bumps into Beth. We get to see the first time that Beth had dinner with the family, she brought some hot sauce for a gift. Jack tells Beth that he sorry that her father past. Jack loves the hot sauce. Rebecca tells Randall that she put almonds in the salad just for him, he says he never liked almonds. Beth excuses herself to speak to Randall out of the dining room, she tells him off for being rude to his mom and she tells him to forgive her already.

The dinner continues, Randall engages in a memory of something they did when they were children and asks Rebecca to tell it because she is better at the story. We then see Randall get engaged to Beth. At the engagement party, Jack gets up and makes a toast. Next, we see when Tess is born, Jack and Rebecca are looking over her and William walks in. Fast forward to when William was diagnosed with stomach cancer, Randall was in the doctor office with him. Randall’s therapist interrupts him, she tells him that they can play games or he can be honest, it’s his choice.

Randall retells his story, his father was not happy with his mother when she reveals that she met their son’s birth father and lied to him for seventeen years. She says she was worried that William would take him and he was an addict. Jack tells her that she was wrong, so wrong. He says Rebecca that he knew would not do this, keep their son away from his birth father. Randall was at the door and heard everything, Jack goes to him. Fast forward to Jack and Randall knocking on William’s door. Randall tells William that he is his son, he says it is impossible, he never had children and didn’t have a son. Jack and Randall leave, in the car, Jack says that that man may not know that he has a son, but he has a father.

We see the dinner at home when Randall came back from school and it is awkward. Rebecca says it is nice to have all the kids home from college at the same time. Randall is quiet, Rebecca tries to engage him in conversation, he gives her a short answer. She tells him about his first day at kindergarten how he was so excited, and now all she gets is fine. Jack tells her to stop. Randall says he is leaving and going back to DC. The family doesn’t want him to leave and Jack blames Rebecca.

Randall is at dinner with a woman he has been dating for two years, he bumps into Kevin, who notices the lady he is with but Randall says it is nothing serious. Then Kate is there, tells them that she has the cabin for the fourth of July and would love if they could be together. Randall says he will think about it. Kevin says he always thinks about and then doesn’t show up. Rebeca walks up when Kevin and Randall are arguing, and asks them to stop until their guests leave.

Randall is at home, he receives a box with a note that reads, “Mr. Pearson, William Hill passed away from stomach cancer. He wants me to make sure you got this. Best, Lloyd.” In the box are newspaper clippings of Randall, and William’s hat. Randall leaves his apartment and throws the box in the garbage.

Jack calls Randall and asks him to come home for the holidays, tells him that he has to forgive her at some point, and she is not well.

Randall goes home, he hugs his mom when she answers the door.

Back to therapy, he tells his therapist he is done and doesn’t want to do this anymore. She says she needs him to acknowledge that if his father had lived, his life could have gone a million ways. He says he is aware of that. She says that in his fantasy, he stopped his father from going back to the house. Randall says it wasn’t the fire that killed him, it was his heart and he should have been there with him. She says that even if he was there, he probably couldn’t save him. He says at least he could have spent the last 20 years knowing that he tried. He says he lost two fathers and if he had it his way, he wouldn’t have lost either of them.

She tells him that it is interesting that he sees this as an exercise over his fathers, but this began when he had an argument with his brother over his mother’s care. His life has really been defined by his mothers. The one he lost at birth, who is barely a footnote in his story, and the mother that lied to him about his father. He says yes, his mother lied to him, but he forgave them and they have moved on, it is behind them. She asks him why he is there. She says she thinks he picked her because she reminds him of his mother to help process everything.

She tells him that she doesn’t give advice, even in the worse parts of his life, he still protects his mother. Has he ever really confronted his mother about what she kept from him. he says that everything she says makes sense and he is grateful for her help. He lost his father, he couldn’t stop it. He lost his second father, and he couldn’t stop it. Now, he could lose his mother, and there are options. He will offer to go to therapy with her, but he won’t open the wound about William, he can’t lose her, he will do anything to keep that from happening.

Randall is home with Beth, she kisses him and tells him that she is very proud of him.

Randall calls his mom, he says he is calling to talk. He says he has been thinking a lot about her decision. She says she has no interest in being away from the family and doesn’t want to talk about the clinical trial. He tells her that he has been a great son after dad died he stayed home to take care of her. And, he let things go, things that were kept away from him. She says she knows. He tells her that she has to do this clinical trial because he doesn’t want to be at a therapist twenty years from now saying he should have pushed harder. He will go to therapy with her. He says again he has been a good son, never asked for anything, but he asking for this. She is going to St. Louis and she is going to do this clinical trial. Rebecca says ok, she will go to St. Louis and she will do the trial.