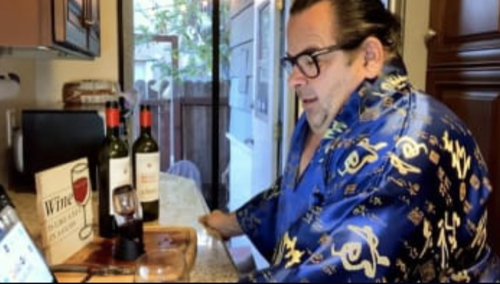 So make sure to tune in tonight between 8 PM – 10 PM ET for our 90 Day Fiance: Before the 90 Days B90 Strikes Back! recap.  While you wait for our recap make sure to check out all our television spoilers, news, recaps, and more, here!

The cast of “90 Day Fiancé” are reliving their biggest moments. Up first is Darcey and Tom. The former couple are no longer together. They’re not even in the same country. Darcey is making coffee with her new coffee machine in the US and Tom was sleeking back his hair in the UK. Both of them got ready for tonight in their own ways. They were each excited to rewatch the old episodes and it was on when they watched the “Pillow Talk” version. They laughed as the others laughed. They went into explanations to defend themselves or their actions at that time and so the former couple was feeling the same type of way. They were wondering what the hell was really going on back then.

Like the wedding dress shopping. Darcey went shopping for wedding dresses with her sister and she wasn’t engaged. If anything, she was complaining about Tom at the time because he forgot her birthday. Her birthday was a big deal to her and she was upset Tom didn’t remember it. Tom now explains that he wasn’t good at birthdays. He said it was a problem with him and that his own mother knows he wasn’t good at remembering her birthday. Tom said he never meant to hurt Darcey. He also added how unfair it was for Darcey to hold such high expectations for him because he didn’t think that was fair and so he complained about her complaining. And it was like that with the next former couple.

Ed and Rose weren’t together either. They broke up after a series of rude comments and lies. Ed knew she wanted to have more children and he didn’t tell her until the last minute that he didn’t want that for himself. He barely wanted to be a parent to the child she has now. There was no way he wanted to have more children with him and so Rose left him when she found out about it. She was tired of the way Ed treated her. Ed acted like he was some big deal and he looked down on her. He also looked down on her family. He was warned that there wouldn’t be any running water at Rose’s house and he pretended it like it wouldn’t be true because he didn’t want to be inconvenienced.

Ed was warned by his friend. He chose to ignore her and then he later acted surprised to see no running water at Rose’s place. Ed can laugh about it now. He doesn’t know that Rose was still laughing at him or that she held up the underwear he bought her as sort of “what is this?”. Rose and Ed aside, there was also Ash and Avery. Avery had confessed at the time that she wasn’t sure if Ash was being genuine with her. The cast of “Pillow Talk” had felt the same way about Ash. They didn’t think he was a good relationship coach because he’s been divorced and so he got upset watching that back. He said he was a good relationship coach. He also doesn’t understand why so many people complain about his lack of honesty.

Ash swears he’s been honest this whole time. He said he spoke from the heart and that he meant everything he said. Sure! Yolanda went next and she looked back at the moment she talked to Williams the first time about visiting his country. She realized now that she should have been suspicious about his accent. He didn’t have a British accent in spite of claiming he was British. He also hadn’t done his research to find out what the local airport was called and so everyone – from the tweeters to the cast- had known the Williams was a con artist. He was a lazy con artist. He didn’t do any research. His lies were pretty obvious. He really just got lucky in his victim because Yolanda was the only person that fell for his act.

Yolanda admits now that she had gotten wrapped in the supposed photos of him. The Williams had sent her photos of this gorgeous guy with all these muscles and Yolanda had felt flattered that someone that attractive would be interested in her. Yolanda now knows those photos are fake. She said Williams was probably short and fat. Yolanda has moved on from the con artist and she was in a much better place. They were all in better places. Ed can laugh now about being teased over his luggage. Everyone thought he packed a lot of junk food and not enough clothes. He cleared that up. He said he brought a second piece of luggage and that one had the clothes while the main one was just gifted.

Ed also became defensive about the amount of money he spent on Rose. He said five grand wasn’t much to him and that it was to her. He loves Rose or so he claims. He said he wanted to help her out and so he didn’t see the big deal about sending her gifts. He also didn’t like it how everyone kept bringing up the age difference. It hadn’t meant anything to him and so he didn’t see why everyone else was so hung up on it. The conversation also went back around to Ash and Avery. Avery waited until the very last minute to tell her family that she was in a relationship with Ash. Ash had already told his family and he didn’t really understand why it took Avery so long. And he was appreciative of her grandmother who thought he looked cute.

Avery again repeated that Ash was the best sex of her life. She said this in front of her mother and so her mother said she’s had some good sex too. Mother and daughter were laughing about their shared love lives. They were no longer letting the Ash thing get in the way of their relationship and so it was good to see them on the same page again.