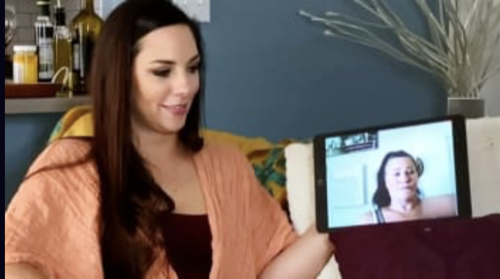 Couples from “Before the 90 Days” are reliving their biggest moments. For former couple Tom and Darcey, they got to watch as Darcey sent Tom’s key back. He gave her a key to his old house and she mailed it back to him after they broke up. They hadn’t ended things well. They both knew there was no way they were getting back together and so getting rid of the key was easy for Darcey. She was just happy to be done with Tom. Tom also got to laugh about him because again that was an old key. He gave her the key to his place and then he moved. He didn’t give her the key to his latest place and that alone says he wasn’t as serious about Darcey as she was about him.

The fans also dragged Tom because in that particular episode he revealed that he started talking to his new girlfriend about Darcey. The fans and the pillow talkers all thought Tom should have had more tact. They also thought the girlfriend should be wary because of what he did to Darcey, he could do to her. Tom has been dragged numerous times throughout his past season on the show. He’s been called everything from a narcissist to a Jesse. Jesse was the guy that Darcey dated before Tom and his name has been turned to a slur now. It means nothing good. Tom being called a Jess now knows how much the fans detest him.

Another former couple from this past season were Ed and Rose. They too had ended things on rough terms. The episode they were watching tonight was the moment where Rose found out Ed didn’t want more children and that he was even considering having a vasectomy to prevent him from having more children. Ed withheld this information from Rose for weeks. He could have told her at the start of his trip and he waited until the very last moment to tell Rose that children were off the table. He knew how big this decision was. He also knew that Rose wanted three kids and so this episode was the beginning of the end for them.

Ed revealed his secret. He revealed it after a wonderful day in the pool with Rose and so the fans were more focused on the pool scene. They were all pretty much disgusted by what they saw. They especially hated the underwater scene and so it’s a good thing Ed’s humor returned. He now laughs at the comments again. He doesn’t take it too personally like he did last week and so it’s a complete reversal. He’s doing better while David was doing worse. David got angry tonight when another person suggested Lana was real and he said he has the last laugh because he knows he went on to meet Lana, but truthfully the last laugh is about him and not with him.

Plenty of fans had something to say about David. They mentioned his girlfriend wasn’t real and he was being catfished. They also discussed how old his furniture looks. David claims to be a rich man and at the same time, his furniture is a total throwback. David explained his reason for it tonight. He said he inherited the furniture from his parents and that’s why he looks so old. He also said the reason why he didn’t want to change up his looks is that he thought he looked better with longer hair. He apparently had a great time with a mullet back in the day and he still remembers it with fondness.

Stephanie and Erika can recall their past relationship with less fondness than David viewed his mullet. The two women had been horrible together. Their relationship just did not work and naturally, some found it odd that Erika would introduce Stephanie as her girlfriend to her parents. The fans all thought Erika should have waited on such a huge step. Erika also came out to her parents as bisexual on that trip and Stephanie was there to act as a supportive girlfriend. It was probably the first time the two had ever been on the same page. Stephanie didn’t make the trip about herself or insert herself into the situation. She truly was just there to support Erika.

Erika appreciated Stephanie being there for her. This was also one of the few highlights in their relationship and it wasn’t too long after this that they had the fight to end all fights. The two later broke up and it doesn’t seem like anyone on this past season had been left happy with their respective partner. Yolanda didn’t even meet the guy she was talking to. She thought she was in a relationship with a man known as the Williams and it turns out he was a catfish. There were several red flags to indicate he was a catfish. Yolanda ignored all of them and so she had to watch as everyone as in everybody and their mama knew the Williams wasn’t real.

Yolanda was delusional about her false relationship. She kept telling everyone that it was real and she ignored sound advice from her own children. Her children had gone online and they had proved the photos of the Williams were fake. They were stock photos. Everyone had access to them and they used them to lure in Yolanda. Only Yolanda didn’t want to admit to such. She found new ways to justify the Williams’s actions and her favorite excuse was that he was hacked. She used that last one to explain why naked photos she sent of herself to this person ended up being found by someone else and “someone else” tried to blackmail her.

Yolanda sounded so dumb that she sounded just like David. David hired a private investigator and then he tried to ignore the PI when the man told him because he didn’t want to hear Lana was on several other dating sites. David liked to pretend all the other sites were fakes. He tried to claim someone was using Lana’s photos to set up these fake dating profiles and all the while everyone was laughing at him. They couldn’t believe how such a supposedly rich man could also be that dumb.

And Avery was once again winning in her breakup with Ash because Ash finally started to show his true colors on the episode they were watching.