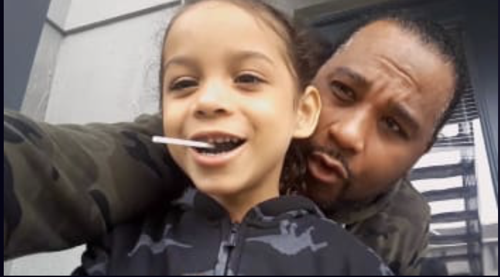 Tim and Veronica co-parent at home, Nicole is trapped in New York while her mom Lidia is alone in the Dominican Republic, and Abby quarantines with her new husband Louis.”

Robert and Anny were pregnant. They were about to have their first child together and this was going to be the sixth child for Robert. Robert also has sole custody of one of his kids. His son Bryson lives with the couple and so Robert has had to take over his education. The school was canceled because of the coronavirus. Bryson understands he can’t go to school because of the virus and that as far as his knowledge about the current pandemic goes. He doesn’t know dangerous the situation is. His parents have guarded him against the truth and so Bryson thinks he’s just having fun. He calls homeschooling “Daddy’s school”.

Bryson enjoys having his father teach his class. Robert on the other hand now believes teachers should be paid a lot more and so its been a struggle for him. He manages to juggle homeschooling with work. He goes outside during the pandemic and it has been scary for him and his family. His wife Anny likes telling him to take a shower when he gets home. She wants to lower the risk of the virus as much as possible because they do have a young child in the house and they were about to have another. Anny’s pregnancy was still something to celebrate. The couple had a gender reveal and together they found out they were expecting a girl.

Another couple going through this is Corey and Evelin. They live in Ecuador together. They were also engaged, but there seems to be some confusion about whether or not they are still engaged. Evelin had asked for a break a few months ago. She said she needed time and so Corey left. He went to Peru. He said it was cheap. He also enjoyed surfing there and he even met someone. He met a woman. They hung out and it wasn’t long before Corey came back to Ecuador. Corey came back because he wanted to be with Evelin. He realized it after being with this other woman and unfortunately, Evelin was angry with him because of this other woman.

Evelin thought them taking a break would mean they gave each other space. She didn’t think it would end the relationship or give Corey the right to see someone else. She was therefore angry when she found out he met someone. Evelin considered it cheating and she was holding what he did over his head. She didn’t quite forgive him. She still wanted space and now she was just using the Peru flirtation as the reason why. Evelin and Corey were in business together. They own a bar and all bars had to be shut down during the pandemic. So, they were surviving on their savings. They didn’t have much left and it was getting to be worrisome.

Tim wasn’t in a relationship with Jeniffer anymore. They met the one time and they argued pretty much constantly. They had thought about living together in the states. Only they changed their minds and they broke up. They broke up and now Jeniffer doesn’t accept his calls. She’s been ignoring him. She doesn’t take any of his calls and he’s just calling in because he wants to check on her. Tim had thought about her at the outbreak of this thing. He wanted to see if she and her daughter were okay and he never really got an answer because again she was ignoring his calls. Tim doesn’t know what’s going on with her.

Tim was focusing on his own life. His sister-in-law was battling Stage 3 cancer and he was worried about her. He was great friends with his ex and so he at least got to check up on his daughter. He shares a daughter with Veronica. Veronica and Tim were great friends. They stay at each other’s houses and co-parenting was easy. Their daughter Chloe was in junior high school. She was skipping out on her work during this and so they had to stay on her. Veronica and Tim have raised Chloe like a friend rather than a daughter. They know its unconventional. They still wouldn’t change it for anything because Chloe turned out to be a good kid and so they’re not going to change their parenting style.

Nicole was a different story. She was a Dominican and she came to New York to see a friend. The trip was supposed to be for a week. It turned into five weeks and her flight home keeps being rearranged. Nicole is stuck in New York with her friend. Her brother Pedro is with his wife in the south and her mother is still in the Dominican Republic. She’s all alone. She doesn’t have her kids and she was worried about the pandemic. Nicole’s mom had family dogs. The dogs were a great comfort to her and so that eased Nicole’s guilt. She wishes she can go homes. She’s been trying to get back there for a while now and nothing works.

Nicole keeps in touch with her family through facetime. Her brother likes to tell her she should have known better than to go to New York because there were already hearing about the pandemic when she made her flight and so he felt Nicole dropped the ball with their mom. He accused Nicole of abandoning their mom when she needed her the most. Pedro made Nicole feel bad about herself and Nicole keeps saying she didn’t know. She hadn’t thought the rumors were serious when she left and she regrets that now.

Then there’s Abby. She used to be engaged to an American man named Sean and she ended the relationship was jealous and controlling. She’s with her new man now. She lives in England with her husband Louis and they seem happy. They have this thing called a prank war. They pull pranks on each other and they both have fun. The couple enjoys laughing together. They got married in a small ceremony and they had planned on something bigger with both of their families, but unfortunately, it doesn’t look like they’ll have that now with this thing going on. Abby also hasn’t been able to visit her family and they have to stay six feet apart when they visit Louis’s family. And so it’s been tough.

Abby does her best to send her family money. She does it because she doesn’t want them going outside to work during this pandemic and so Abby is doing her best to look after her family. She’s under a lot of stress because of what’s going on. Her husband understands the situation and so he tries to make it better for her by turning their house into a nightclub. And that way he can still take her out dancing.