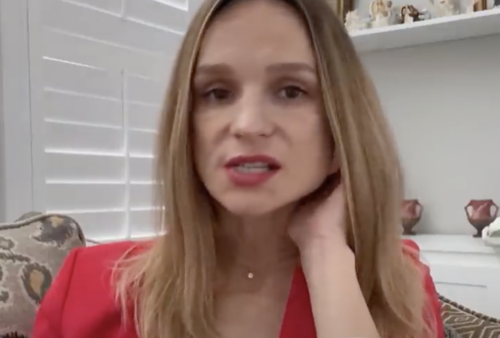 So make sure to tune in tonight between 9 PM – 10 PM ET for our 90 Day Fiance recap.  While you wait for our recap make sure to check out all our television spoilers, news, recaps and more, here!

Molly needs a day to be pampered. She hasn’t done her hair or her nails. She even cut off her daughter’s hair in order to deal with it during their quarantine. Molly has been stuck at home with her children. She hasn’t seen or spoken to her ex-husband Luis in years. She did, however, hear a rumor. She’s heard he got remarried. He married a girl from the Dominican Republic like him and this other woman was known to his family. Molly suspects it might have been arranged. She said Luis knew what he was going to do from the start and that she holds no ill will. Molly has moved on.

Molly still has her business. She owns a clothing company and she’s since turned into a mask factory during the quarantine. Molly and her friend Cynthia provided face masks to the feds, the hospitals, and foreign countries like Canada. The two managed to adapt to their circumstances. If anything, Molly’s only struggle seems to be her daughter homeschooling. Molly was not a teacher and she struggled with keeping on top of her daughter’s schoolwork. She’s turned to having a glass of wine to relax. Molly was also lucky because she has her best friend Cynthia with her and together they kept each other laughing.

But Jorge was in prison. He’s been in prison for one year and eight months. Jorge is best remembered for breaking the law in order to keep his trophy wife happy and rich. His ex-wife Anfisa liked expensive things. She liked expensive clothes and bags. She demanded to be kept in style and so Jorge started trafficking in drugs. He was later arrested over it. He thought Anifsa would stand by him and she ditched him the first chance she could. She dumped two months into his sentence. He hasn’t seen or heard from her since. He now knows he was foolish to do what he did for her.

Jorge said he’s going to file for a divorce the moment he’s freed. His prison sentence has done a lot of him. He lost a dramatic amount of weight behind bars and he got himself right mentally. He now helps in sanitizing the prison. They were more in danger of this pandemic than everyone else because some of the prisoners were coming off fresh from the street and they were crowded in like sardines. Jorge, therefore, has to deal with the very real fear of possibly getting the coronavirus. He talked about it and he said viewing the outside world was surreal. He said the rest of the world doesn’t look the same as he did before. And so that was another thing to worry about.

Matt was worried as well. He owns a car business and, while he hasn’t been able to sell cars, there’s still the mechanic part of the business that has been deemed essential in the pandemic. Matt still goes into work. He exposes himself to the coronavirus every day and so he doesn’t come home to his wife Alla. Alla is from Ukraine. She’s also thirty-seven weeks pregnant and no one wanted to put the baby at risk. Alla is staying in the main house. Her husband is staying at the RV. He’s been there for two weeks and he misses his wife. Matt said its been really hard to distance himself from his family when normally he would have been able to stay with his wife.

Matt even had to worry about the delivery. He had heard the hospitals were cutting down on how many people the patients could bring with them and so he called the hospital to see if he could be there with his wife when she gave birth to their first child. It a momentous occasion. He didn’t want to miss it and thankfully the hospital said he could come in with his wife. She was allowed one guest in the delivery room. The hospital also didn’t seem like it was going to be handing out masks and so the couple had to make sure they brought their own. Matt was just so happy about being there for the birth that he didn’t about everything they’d have to go through once Alla was in labor.

Emily and Sasha were dealing with a different situation. Sasha was feeling ill. He called the doctor’s office and he explained his symptoms. He was told he either had Covid-19 or the flu. Sasha has had persistent symptoms and so he went in for Urgent Care. He was tested. He came out negative and so he didn’t have the coronavirus. He instead had the flu. It was still a serious flu because he had a high temperature and it, therefore, took a while before he was back to his old self. He soon went back to working out. He also stepped up as a father. Sasha’s parenting had been a little disappointing back when they were in Russia and it’s a good thing he changed.

Sasha now makes meals. He also cleans out the dishwasher and this helped because Emily had to work from home. She now is around both her husband and son all the time. Emily thought it was great when she saw her son walk for the first time because she would have missed it if she had been at work and yet her same son is also very demanding. He wants to play her while she has to work. Which is very inconvenient. Emily and Sasha are also arguing about things because they’ve been in such close proximity for so long that it’s starting to get to them. They were even caught arguing over whose turn it was to talk to the camera and so quarantine hasn’t been easy for them.

It wasn’t easy on Alan and Kirlyam either. The couple was separated. Kirlyam went to go visit her family in Brazil and she had taken her young son with her. They, unfortunately, they became trapped in Brazil. They didn’t know when they would be allowed to come home to the United States and so that left Alan on his own. Alan had started a new job. It was on the east coast for the first time and that meant he was adjusting to a new area and doing it alone. Alan did a bunch of stuff he knew his wife wouldn’t approve of. He played soccer inside. He took up the harmonica. He even traveled for work and one time someone had stolen some gloves from his luggage.

Alan merely said it was a sign of the times.