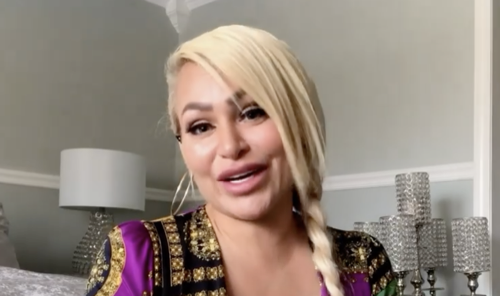 Chantel loses her sense of smell. Caesar reveals a secret he’s been keeping. With Steven still working, he and Olga haven’t had any alone time in weeks. ”

Darcy had been in quarantine for 3 weeks. She has been spending her time working on herself and cleaning. It is has been tough being cooped up with her twin sister Stacy and their daughters.

Stacy’s hair extensions are coming out. Their daughters are having trouble with online school. They are also mad that they are missing out on activities and their friends. Darcy’s daughter is missing prom and graduation. She puts on her prom dress for fun.

Darcy tries to take off Stacy’s gel tips and she keeps hurting her with the drill. After that goes badly they work on her extensions. Stacy thinks Darcy may be cutting her real hair out. Someone leaves a cotton ball on the breakfast table. The acetone eats through the stain.

Pinky and Pedro have been in quarantine. Pinky doesn’t leave the house while he goes shopping. They are living in a small area and she can’t stand it. Pinky has been doing her nursing classes online and it is hard. She also noticed her sense of smell is lacking so she wonders if she has coronavirus. But she doesn’t want to go to the hospital.

Pinky models for Pedro. He got a new camera. He is having issues but he keeps trying. Pinky doesn’t like her photos. She video chats with her sister and mom. They all dance. Meanwhile, Pedro has purchased a bidet. Pinky thinks the whole thing is gross but if he wants to put it in the can. He attempts to install it but it doesn’t go well.

Ceaser has been under quarantine for the last 3 weeks. He takes his bike for a ride. He stops by his closed salon where he is a nail tech. He heads home and video chats with a client, showing her how to give a pedicure.

Ceaser admits to the producers he dates a woman named Maria for 5 years from Ukraine. They never met and ended their relationship. He decided on a whim he needed closure so he went to Ukraine. She was upset he just showed up but she wasn’t answering his calls. They spent some time before parting ways. They did take photos together, he tells producers, but she must have erased them.

He has since met someone new. He talks by video with a good friend of his. She is like a sister. He has a date tonight. It is going to be virtual. His friend wants to make sure he hasn’t sent her money and that she lives in the U.S.

Ceaser shares that he has talked to his girl by Facetime, phone, and more. She is a model and is very nice. Their virtual date begins. Aya tells him to come and see her. He wishes he could. They toast to their relationship.

Steven and Olga are in quarantine. It has been 2 weeks. He has been working as a delivery driver and living with his grandmother. It is temporary. Steven and Olga want to move to the west coast with their son but they cannot right now because of the virus. Steven’s grandmother is nervous she could get the virus because she is older.

Steven sneaks out of the house to work. Olga is worried and his son always gets upset when he leaves. After his shift, he arrives home and is forced to change his clothes outside. They have a romantic dinner together that Steven made. She loves it.