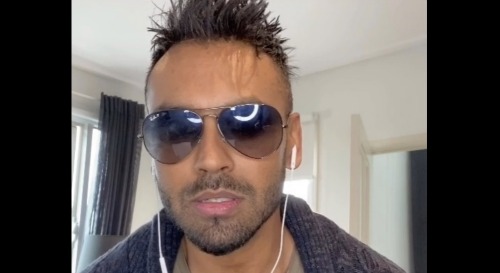 TLC 90 Day Fiance: Before The 90 Days spoilers has some fun news to pass on about Ash Naeck, who is one of the current cast members of the show. As you’re probably aware, Ash recently returned to social media after his self-imposed hiatus for mental health reasons. He returned with a video in which he apologized for his disastrous relationship seminar and he insisted that he wasn’t sexist.

And of course, the show has continued on, with Ash and Avery Warner still in relationship turmoil. On the most recent sneak peek for Sunday’s all-new episode, Ash and Avery are visiting with Ash’s ex-wife and his young son. But there’s still tension in Ash and Avery’s relationship, so it looks like more drama is to come.

Well, recently it seems that Ash decided to have a little fun. Ash recently posted a video of himself singing, and it wasn’t just any song that he performed – it was his costar Usman Umar’s song called “Baby Girl Lisa.” Usman, who also goes by the stage name Sojaboy, wrote the song for Lisa Hamme.

Ash posted the video of himself taking on the song along with the following caption: “Baby Girl Lisa by Sojaboy-Ash. @officialsojaboy bro do you think I can take on an important role in your next music video? @baby_girl_lisa_2020 love you both.”

Ash’s version of the song sounds quite different than Usman’s original version, and it’s pretty funny. You can watch the video below and judge Ash’s vocal talent for yourself. It’s clearly intended to be a humorous take on the song, and toward the end it all kind of falls apart in a hilarious way.

Ash has received a lot of comments on his video, including from some of his 90 Days fellow cast members. Tom Brooks wrote: “Brother, lmfao.” And Erika Owens wrote: “ASH I AM CACKLING HAHAHAHAA.”

And Usman even reposted the video on his own Instagram feed, saying: “Hahahaha. ASH u are so talented. Hi My people I wanna hear ur opinion here should we sign @themindbodycoach in our Record Label USB Entertainment????” Usman then tagged all of the Before The 90 Days cast members for comment. In response to that, Ash replied: “Looking for a gig with you soon bro lol.”

The video really is worth watching, and it’s nice to see Ash letting loose and having a good time after all the drama on the show with Avery. What do you think of Ash’s video? Stick with 90 Day Fiance: Before The 90 Days and don’t forget that CDL is your go-to source for all the latest 90 Day Fiance news and spoilers!