TLC ’90 Day Fiancé Spoilers’: ‘Before The 90 Days’ – David Murphey Jokes About Not Finding Lana – Is Lana The Cafe Owner? 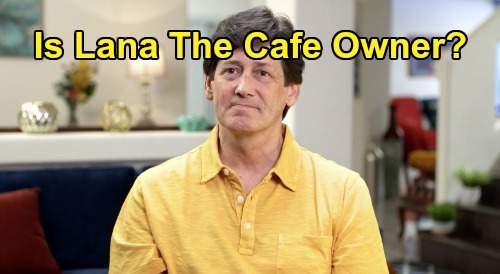 TLC 90 Day Fiance: Before the 90 Days spoilers tease that David Murphey is having a terrible time lately. As 90 Day fans know, David has yet to meet his Ukrainian love interest Lana in person, and this past week he planned to meet her in a cafe. David happily bought flowers to the cafe and ordered a bottle of champagne in anticipation of Lana’s arrival.

David’s anticipation level was high, as were his nerves, and he even had to change his signature polo shirt at the cafe because he was sweating so profusely! But unfortunately, Lana no-showed, and viewers watched as a deflated David sadly left the cafe alone after a couple hours.

Well, if you follow David on Instagram, then you know that he has a pretty good sense of humor about the situation. Actually, David only recently created an Instagram account, but he seems to be posting pretty regularly. He’s posted a handful of pictures at this point, and one recent post concerning David’s saga at the cafe caught our attention.

David posted a couple of stills from the show, one of which was the scene outside the Ukrainian cafe as David was headed in for his supposed meeting with Lana. Outside the cafe stood a wooden cutout of a young woman in a blue dress holding flowers. The other still was from a scene in which David tells the audience that Lana said she was going to wear a blue dress to their meeting.

David’s caption reads: “Who says I didn’t notice? Proved you all wrong. Told you I would find her.” Of course, once wonders whether Lana (if indeed there is a real woman named Lana) told David she’d be wearing a blue dress as a cruel joke, knowing that the cutout in front of the cafe wore a blue dress.

At any rate, several of David’s followers have noted his sense of humor about the difficult situation. In response to David’s post, one of his followers replied: “Here you go again, showing that you have a fab sense of humor and that you can be self-deprecating.” And another person commented: “This is too funny!”

And then, someone commented with an interesting theory about the situation. This person said: “It turns out Lana is the restaurant owner at the restaurant. She cons dudes so she never has to buy flowers for the restaurant.”

Of course, that person is referring to the cafe owner, who was interviewed on the show after David left the cafe. Viewers will remember that the owner ended up scooping up the flowers that David left in the cafe and using them to decorate the place afterwards. She also noted that she sees men come in the cafe often, wait for someone, get stood up, and leave.

Of course, at this point the theory that Lana could be the cafe owner may not sound so far-fetched! Viewers will have to stay tuned to the show to find out what happens with David and Lana’s story going forward – namely, whether David will ever meet his beloved Lana in person, and whether such a person even exists.

Stay tuned to 90 Day Fiance: Before The 90 Days and don’t forget that CDL is your go-to source for all the latest 90 Day Fiance news, updates, and spoilers!