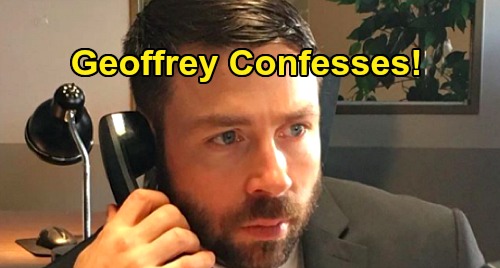 TLC 90 Day Fiance: Before The 90 Days spoilers reveal that Geoffrey Paschel is speaking out about his prison stint. As 90 Days viewers will remember, Geoffrey recently revealed to Varya Malina that he had done time in prison, and she wasn’t amused. Varya needed some time to herself, then eventually decided to forgive Geoffrey for not previously disclosing his checkered past during their long-distance correspondence.

In fact, Geoffrey’s offer to tell Varya’s mom about his prison stint seemed to be a critical factor in Varya forgiving Geoffrey.

Geoffrey telling Varya’s mom about his past seems like the right thing for Geoffrey to do, but a comment that he recently made on his Instagram feed suggests that he wasn’t actually happy about having that particular discussion with Varya’s mom.

On his Instagram feed, Geoffrey posted a lengthy account of what happened when he was initially taken to prison. In response to that post, a fan commented: “Your past is your past that shouldn’t even come up. Seeing that v [Varya] wanted you to tell her mother about all that in all honesty was not the place nor was it her business. Your past shouldn’t define who you are today or even persecute you any longer. You made a mistake you paid for it cased closed. Now you’re in a better place on a tv show just keep it going!!”

In response to that comment, Geoffrey replied: “Yeah, that was crushing.” This is an interesting comment for Geoffrey to make, given that he’s really the one who offered to tell Varya’s mother about his past!

It certainly didn’t seem to us that Varya demanded that Geoffrey tell her mother about his prison stint, or that Geoffrey was “crushed” by any suggestion that he be the person to talk to her mother.

We’ll see what happens going forward – it certainly seems that 90 Days viewers are going to see what’s bound to be an uncomfortable conversation between Geoffrey and Varya’s mother.

Perhaps it was the experience of telling Varya’s mother itself that was crushing – now that would make sense! At any rate, it looks like viewers have that drama to look forward to.

We should note, too, that Geoffrey says that more of his prison/arrest story is on the way. His initial post, in which he shared the details of getting to prison and taking in the scene, included a statement saying that he’s going to try to make a weekly post telling his story, so there’s more to come.

You can read Geoffrey’s lengthy post below – it provides a first-hand account of what happened to him immediately after being sentenced as he was whisked off to prison.

What do you think will happen when Geoffrey comes face to face with Varya’s mom and spills the truth about his criminal past and prison sentence? Stay tuned to 90 Day Fiance: Before The 90 Days and don’t forget that CDL is your go-to source for all the latest 90 Day Fiance news, updates, and spoilers!

Prison Story Time I am going to try making a weekly post telling my story—maybe it will change some paths in life. My specific path sucked & I only want to share so people who are in similar shoes can at least attempt to make a change. As seen on tonight’s episode, I didn’t share it w/Varya. I am not proud of the experience & I have always hidden from it. . I was handed down my sentence & I was immediately cuffed & shackled. They yanked me away as I was asking to hug my significant other goodbye. I was whisked through a back door, thrown into a van, & carted off. I turned around & looked out the back window & saw my ex chasing after the van, crying & screaming for me. It was a very surreal moment. This was the beginning of the next couple of years; I was going to be locked away. . During the ride, I looked down at myself & realized I was roughly 130 or so pounds of nothing & I had no idea what I was getting into. I tried to look out the window & enjoy the last bit of being on the “outside”, but I kept dwelling on the feeling that I was going to be in trouble when I got to my destination. It was then that I asked one of the guards if I was going to be ok. I will never forget him looking back at me, smiling, & muttering, “You’re fucked.”. . It was time to swallow my pride & put on my game face. I was this very scared 20 something year-old kid taking on this very fake & newly-acquired fearless persona in order to make it…successfully. We rode for a couple of hours & finally made it to my first destination. My new home for a bit… . We pulled up & I was jerked from the van. After all the monotonous BULLSHIT of intake, I was told to grab a mattress & a toiletry bag. Next, they guided me through numerous locked doors until I arrived at my “pod”. They opened the last door to my first taste of confinement… . The smell was that of sweat, body odor, & musty piss, & I knew this was going to be “my smell” for as long as I was here. I scanned my options for where to throw my mat & settled for a top bunk against a wall so I would have at least one side protected. As I lay down & tried to close my eyes, I hoped that I would wake up & realize this was all a terrible dream…