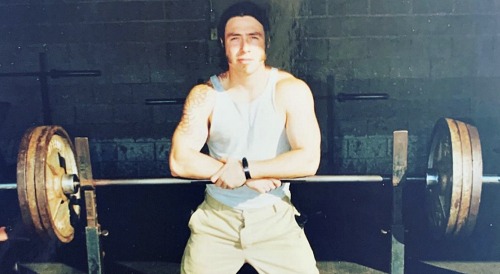 TLC 90 Day Fiancé spoilers: Before The 90 Days reveal that Geoffrey Paschel detailed the moment he was arrested. The TLC star took to Instagram to talk about his arrest, which was addressed on Sunday night’s episode, April 12, of Before the 90 Days. He posted a photo of himself looking tough along with a lengthy Instagram post.

On Sunday, April 12, Geoffrey wanted to address his arrest on Instagram. The throwback photo showed him standing behind a weightlifting bench. The father was inspired to share his story in order to change someone else’s path. The Tennessee native also aid that he would post updates on a weekly basis.

The Before The 90 Days star also admitted that he hid his truth and now he needs to address it. Geoffrey detailed his experience of sitting in the courtroom and hearing his sentence but could not understand the severity of his situation.

Geoffrey called the entire legal process “bulls***” but fans reminded Geoffrey that jail is not a vacation. He noted that his jail cell was tiny and reeked of urine and body odor, and that he slept on the top bunk.

90 Day Fiancé: Before The 90 Days Spoilers – Not Telling the Whole Truth?

Fans only social media claimed that Geoffrey wasn’t telling the whole truth once again. Fans pointed out that he addressed only his drug arrest. According to social media fans, Geoffrey didn’t reveal other arrests allegedly related to claims of  assault.

Geoffrey hinted that he needs to work on his anger issues. The reality star promised fans that there will be more to come soon. Some wondered if the 90 Day Fiancé star could be trying to score a book deal. Some fans argued that prison should have changed him, as it’s apparent on the show that Geoffrey needs to manage his control and anger issues.

Others social media commenters noticed the lack of details about Geoffrey’s criminal past. Right before the new season of Before the 90 Days, it was reported by Knox News that he was summoned to court in January for a 2019 arrest. The arrest involved an alleged altercation between Geoffrey and his girlfriend.

She accused him of dragging her across the floor and bashing her head into the walls. Geoffrey pleaded not guilty to the charges while the woman filed a restraining order. Geoffrey was charged with domestic assault, kidnapping, and interference with emergency calls.

That’s just some of Geoffrey’s alleged criminal past. Back in 2019, he was fighting a custody battle with his fourth ex-wife, Brittany. While the two reached a divorce agreement, their ability to co-parent fell apart, according to Starcasm.

Back in 2004, Geoffrey’s second wife filed court documents accusing her husband of physical assault. The document also revealed there were medical records to back up her claims. She claims that he assaulted her in front of their children. Geoffrey has a long history of assaulting his exes.

Be sure to catch up with everything happening with Geoffrey Paschel on Before The 90 Days right now. Come back here to CDL often for 90 Day Fiancé spoilers, news, and updates.

Prison Story Time I am going to try making a weekly post telling my story—maybe it will change some paths in life. My specific path sucked & I only want to share so people who are in similar shoes can at least attempt to make a change. As seen on tonight’s episode, I didn’t share it w/Varya. I am not proud of the experience & I have always hidden from it. . I was handed down my sentence & I was immediately cuffed & shackled. They yanked me away as I was asking to hug my significant other goodbye. I was whisked through a back door, thrown into a van, & carted off. I turned around & looked out the back window & saw my ex chasing after the van, crying & screaming for me. It was a very surreal moment. This was the beginning of the next couple of years; I was going to be locked away. . During the ride, I looked down at myself & realized I was roughly 130 or so pounds of nothing & I had no idea what I was getting into. I tried to look out the window & enjoy the last bit of being on the “outside”, but I kept dwelling on the feeling that I was going to be in trouble when I got to my destination. It was then that I asked one of the guards if I was going to be ok. I will never forget him looking back at me, smiling, & muttering, “You’re fucked.”. . It was time to swallow my pride & put on my game face. I was this very scared 20 something year-old kid taking on this very fake & newly-acquired fearless persona in order to make it…successfully. We rode for a couple of hours & finally made it to my first destination. My new home for a bit… . We pulled up & I was jerked from the van. After all the monotonous BULLSHIT of intake, I was told to grab a mattress & a toiletry bag. Next, they guided me through numerous locked doors until I arrived at my “pod”. They opened the last door to my first taste of confinement… . The smell was that of sweat, body odor, & musty piss, & I knew this was going to be “my smell” for as long as I was here. I scanned my options for where to throw my mat & settled for a top bunk against a wall so I would have at least one side protected. As I lay down & tried to close my eyes, I hoped that I would wake up & realize this was all a terrible dream…