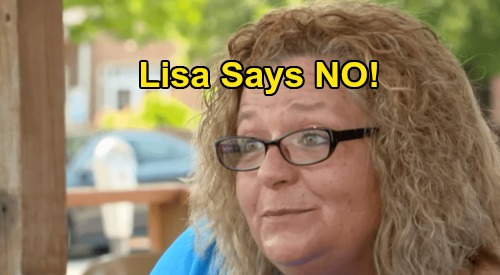 TLC 90 Day Fiance: Before The 90 Days spoilers tease that Baby Girl Lisa Hamme has something to say about Usman Umar aka Sojaboy’s statements about her allegedly being suicidal early in their relationship. It all started when Usman made a live video appearance from Nigeria on an episode of Angela Yee’s podcast called “Lip Service.”

During that podcast, Usman made a number of shocking statements, one of which was that Baby Girl Lisa had tried to commit suicide after he told her that he didn’t love her for real. Usman’s statement came as he was describing how he came to tell Lisa that he loved her, and then at a later time told her that it wasn’t love.

Usman said the following: “So, after some time, I was like, this cannot continue. We spent about one year with you telling me that you love me, you love me, and I was saying that I love you, I love you. But deeply in me I know it’s not love. I don’t love you for real, honestly. But I do know that to make you happy, I do that to, you know, to make you happy – to calm you down.”

And then Usman said the following: “So Lisa starts, you know, trying to hang herself, commit suicide. I was like, no, no. My father is an Imam and we were taught in the way that is good for you to please somebody. It’s better I tolerate her, you know problems – all the headaches she has given me – and make her leave, than for me to say I didn’t love her, then go and kill herself.”

Usman continued: “So, I was like, it’s better for me to tolerate that, you know…than for me to say I don’t love you, then she go and kill herself because of me. So that is how it happened.”

Well, that’s a pretty big statement, and recently Lisa made a response through her promoter, Rocco Straz. In an exclusive statement to In Touch, Rocco said the following: “At no given time did Lisa state she would kill herself, for him or any other man. She is a very independent woman. Lisa doesn’t need Sojaboy. She wants Sojaboy! Suicide is something that should not be thrown around lightly. Lisa has a beautiful family and would ever do such a thing!”

In Touch also reports that it heard directly from Lisa, who stated: “At time of interview, Usman was angry at me and the world.” Well, that’s a pretty big difference of opinion right there. We’ll leave it up to readers to decide what to believe here and who is accurate in their statements.

Ultimately, it comes down to Usman’s words during the Lip Service interview versus Lisa’s response. Who do you believe is telling the truth here – Usman or Lisa? Stay tuned to 90 Day Fiance: Before The 90 Days and don’t forget that CDL is your trusted source for all the hot 90 Day Fiance news, updates, and spoilers!