TLC ’90 Day Fiancé Spoilers’: ‘Before The 90 Days’ – Tom Brooks Apologizes To Darcey Silva – Will She Slam That Door In His Face? 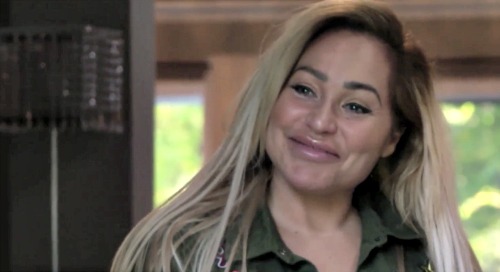 TLC 90 Day Fiance: Before The 90 Days spoilers tease that Darcey Silva has a big decision to make on the next all-new episode of the show that will air on Sunday, April 26th. As viewers know, Darcey and her boyfriend Tom Brooks had a major – and we mean MAJOR – discussion at a restaurant during which Tom told Darcey that he had met someone else.

The discussion was supposed to be about their relationship and what they were going to do going forward, but it turned out to be a “breakup” conversation from Tom’s standpoint, and then Darcey confronted Tom about another relationship he was involved in. It was totally uncomfortable, and they left on terrible terms, with Tom remarking about whether Darcey had put on weight.

“I’ve decided, foolishly or not, to go to Connecticut to deliver the letter that I wrote to Darcey,” Tom says in the confessional. “I feel badly about how things happened in New York and I’d like to make them right.” Well, in the sneak peek for Sunday’s episode that has aired on TLC, Tom gets right up to the door when the action cuts off.

But in a new sneak peek at E! News, viewers get to see a bit more of the interaction that takes place after that door opens. Tom first sees Darcey’s twin sister, Stacey Silva, who then calls Darcey to the door. “I wanted to come and apologize for the way things ended yesterday,” Tom says to Darcey. “That’s not what I wanted it to be like.”

Tom goes on: “And I always tried to treat you with respect, and yesterday I didn’t. I’m sorry for that.” Darcey looks pretty taken aback by Tom’s apology in the video, as if she doesn’t know whether or not to take it as truthful. And we get that, totally.

The scene then cuts to a confessional, where Darcey said: “I am shocked that Tom showed up. I completely blocked him out of my life. I don’t want to see him. I don’t want any fake apology. Nope.”

Of course, the big question here is whether Darcey will soften as Tom’s apology sinks in. After all, Tom really should be apologizing – it’s the right thing to do after his behavior at the restaurant. Darcey could accept his apology, or she could just slam the door shut in his face!

And let’s suppose that Darcey does accept Tom’s apology – that doesn’t necessarily mean that she’ll be willing to take him back and give their relationship another go. Darcey seemed really hurt by their interaction at the restaurant in NYC, so she may have some serious terms if she’s going to keep moving forward with Tom.

Perhaps Darcey will insist that Tom quit seeing that other woman that she caught him interacting with online. Those would be reasonable terms for sure. We’ll see how this all plays out on Sunday’s episode of the show. Don’t miss it!

Stay tuned to 90 Day Fiance: Before The 90 Days and don’t forget that CDL is your go-to source for all the latest 90 Day Fiance spoilers and news!