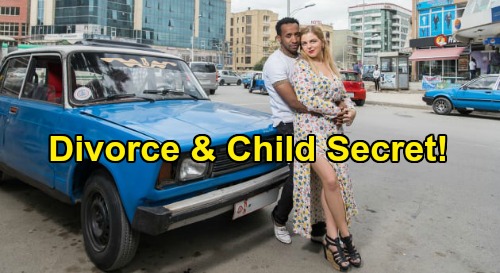 TLC 90 Day Fiance: The Other Way spoilers tease that Ariela, who is one of the new cast members for Season 2, will almost certainly be finding out some very distressing news about her boyfriend Biniyam as the show unfolds. As CDL reported in our post on all the new cast members for Season 2 of 90 Day Fiance: The Other Way, Ariela is pregnant and is moving to Ethiopia to have the baby so Biniyam can be present for the birth.

That’s a big deal right there, and it looks like Ariela is going to have a tough time adjusting to life in Ethiopia. Ariela is shown in the sneak peek video for the series ranting at Biniyam about the lack of a bathroom and a refrigerator in his place.

It also looks like Ariela and her family are going to be very worried about the healthcare conditions under which she’ll be giving birth. That’s certainly a recipe for drama.

But there’s more. Starcasm has reported that Biniyam has been married previously…to an American woman! This is pretty interesting given that Biniyam’s prior marriage is not currently mentioned in the promotional material for 90 Day Fiance: The Other way.

It’s certainly not a part of the sneak peek video, and it wasn’t mentioned in Ariela and Biniyam’s bio for the series at all.

Could this mean that Ariela doesn’t know about the prior marriage? It would certainly come as a blow if Ariela were to suddenly learn about a prior marriage, and to an American woman to boot! Ariela might not be happy to learn that the father of her unborn child has been married before and involved in a very similar situation.

But it’s not just that Biniyam was married before…he has a son with his American ex-wife, too! That’s probably something that Ariela will think that she should have been told LONG before now.

We can just see the high drama, assuming that Ariela didn’t know about the ex-wife and the son. Could this be a major surprise that Biniyam will spring on Ariela in the midst of the show?

That certainly sounds like how 90 Day Fiance works! And given that Starcasm is reporting that Biniyam has been unable to get US visas (after several attempts) to go visit his son, that seems to have serious ramifications for Ariela and her unborn child.

If Biniyam can’t ever get to the US, then that could mean that Ariela needs to stay in Ethiopia if her child is to have any sort of relationship with Biniyam going forward.