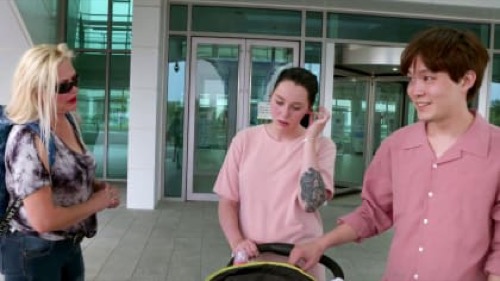 There were a few warning signs with Yazan. Yazan was quick to anger. He got upset with Brittany because she hugged a male member of the production crew and she had alcohol on her. Yazan failed to remember how these weren’t big deals to Brittany because she comes from the United States. He chose to get angry because he wanted to be angry and it took some time to calm down enough to explain himself. He later told her that she was disrespecting him with her actions. He said those things weren’t done in Jordan. He told her that her behavior needed to change and that enraged her. Brittany reminded him that she has her own culture.

Brittany is an American. She’s not going to understand what life is like or even what the culture in Jordan right away and so she became angry with him as well. Brittany had asked him not to talk to her. She wanted to be left around for the car ride. Yazan hadn’t liked giving her the last word and so he tried to tell her enough. He also put his hands in her face. She knocked it away. She told him not to do that and then she refused to talk to him the rest of the way to the hotel. Brittany didn’t even help him unload her stuff. She ignored him and she went to the hotel where she had her doubts. Doubts about the relationship. Doubts about Yazan.

Yazan had shown another side to himself she has never seen before. She didn’t like how quick he was to lose his temper and she felt he should have taken it easier on what with it being her first night in Jordan. Brittany came to doubt Yazan so much that she hadn’t told him about her divorce. Her divorce hasn’t gone through yet and she was still married. Brittany planned on telling her fiancé this when she landed. Then the fight happened. The fight took over everything else and so Brittany chose to keep her secrets. She suddenly felt like Yazan couldn’t be trusted to react well to her news.

Over in South Korea, Jihoon was moving. He was packing up his things at his parents’ place and he was moving into the new home he had planned on with his wife. Deavan believes Jihoon has gotten everything ready. She believes he has a place set up for them and she also believes that he’s now working two jobs. It turns out Jihoon lied about several things. He was working part-time as a delivery driver and he wasn’t earning enough to support a family of four. Jihoon was supposed to have gotten his life together. He just never did and now Deavan is coming to an unprepared home with her two children. And she’s bringing along her mother.

Her mother Elicia has a temper. Elicia doesn’t know why her son-in-law couldn’t do the most basic of tasks. He was supposed to have gotten a job and he could barely do it. He was supposed to have grown up and yet he’s still playing make-believe with his wife. Elicia thought her daughter and grandchildren deserved better than such childish behavior. She was now coming with her daughter to South Korea because she wanted to see if Jihoon followed through on any of his promises. He hadn’t and so he dreaded seeing her. He also tried to warn his family about her temper. He knew Elicia wasn’t going to be happy and he didn’t want to catch his parents by surprise.

Back in the States, there was a new couple going through the process. Tim and Melyza. Melyza is from Colombia and she met Tim when she was working in the States as an Au Pair. The two went on to date long-distance when Melyza moved back home to finish her studies. The couple now plans on living in Colombia together. They couldn’t live in the States because Tim did something in the past and his mistakes are preventing them from living together in Texas. His troubles could have ended the relationship between him and Melyza. Only they decided to make their lives in her home country and so now he was leaving it all behind for her.

Tim is currently living in Texas. He knows some Spanish albeit not a lot. He knows enough to converse with Melyza and so that will have to do for his move. Tim also has to say goodbye to his life in the States. He hadn’t told his friend beforehand that he was leaving and so he dropped it on them at the last minute. He told them when they had met for drinks that he leaving to go live in Colombia with Melyza. His friends were naturally upset at losing him. They were also happy that he was finally going to be with his dream girl. They’ve Melyza. They all love her. They also thought he was moving because he had cheated on Melyza and that now he has to make it up to her now.

They even asked him about it. They asked and Tim answered. Tim admitted he was ashamed of his past behavior. He did say that Melyza hadn’t wanted to leave her family behind anymore once she found out he had cheated with a coworker and so the cheating did play a part although Tim didn’t think he was moving down there out of guilt. He wanted to be with Melyza. He was willing to try anything to be with her and so that’s why he’s moving. Tim was giving everything up to be with Melyza. What many of these Americans don’t understand is how much of culture clash there is. The States offered them certain freedoms they would never receive anywhere else and so it’s not going to be easy for Tim.

Even if that’s what he thinks. Tim like the rest of the Americans is going to be starting over in a new country and that needs money. It’s unclear if Tim has enough. Kenneth was actually in a much better position to move. He sold his house and cashed everything in. Kenneth was going to use his savings to carry the day for his new family. Ariela doesn’t really have much savings because she worked as a freelance writer and so she was expecting her boyfriend to be able to provide for them. Biniyam is a little bit of a renaissance man. He does everything and that includes music. He’s starting a music career.

Biniyam was also a divorced father. He hasn’t seen his son in a long time because his ex basically cut him out of the picture and his ex treated him so badly that his friends were truly worried about him dating another American. They thought Ari would be just like the ex-wife. His friends set out to dislike her before they had actually met her.

And later Jihoon showed off the new apartment to his wife and her mother, but Elicia was not happy with the grungy place and neither was his own mother.