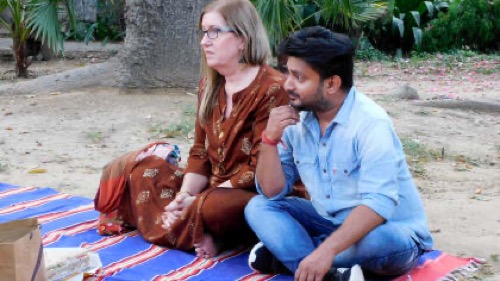 Brittany broke down in tears. She felt like the biggest idiot in the world for going to Jordan. Brittany flew all that way to be with Yazan and Yazan’s family treated her like trash. His parents were horrible to her. His parents apparently read disrespect in her actions because she said her father couldn’t fly over there in two weeks. She said that because she had already told Yazan that it would be months before her father could fly out to Jordan and so she didn’t see the big deal nor did she say it with disrespect. She was simply stating facts. Brittany had discussed this with Yazan and, rather than be upset at Yazan, his parents took out their anger on her.

Yazan is claiming she embarrassed him. He told her she was being disrespectful to his parents and she had no idea how she was being disrespectful. She asked for clarification. She didn’t receive it. She was just told she was wrong. Brittany doesn’t know a lot about Muslim culture and her potential in-laws should have talked to her as a human being. They didn’t show her the same respect they were demanding for themselves. They were downright hostile when there was no reason to be and Brittany told Yazan that she never wanted to see his parents again. She was done with being mistreated.

Kenneth’s potential in-laws weren’t really ready to upset either. Only they at least chose not to show up and get into Kenneth’s face. Kenneth made it down to Mexico. He went to his new apartment with Armando and the two celebrated his move. They waited a long time to be together. They couldn’t wait to spend the rest of their lives together to make up for it and so they were happy. They were probably the only ones that were truly happy this season. Armando’s parents couldn’t take away their joy and Armando’s daughter loved Kenneth. She couldn’t wait to live with her two dads.

But Melyza’s boyfriend Tim is moving to Colombia to be with her. He’s moving down there because she refused to move to the States after she found out Tim had cheated on her and so the couple was still working on moving past the infidelity. Melyza told her mother what happened. Her mother was disappointed with Tim for doing that and she stopped trusting Tim. She didn’t even want Tim to be with Melyza anymore. She wanted her daughter to find someone else. Someone who wouldn’t cheat on her and to be honest that’s pretty reasonable. Her mom had a very good reason for not liking Tim.

Melyza and her mom didn’t tell the dad what Tim did. Melyza’s dad was therefore the only person that was truly happy to have Tim moving to Colombia. Not even Melyza was all that enthused. She’s still trying to find a way to forgive Tim and she’s not ready yet. There was no telling when she would be ready. Melyza won’t know what will happen until Tim is down there. They’ll try to work on their relationship and if it doesn’t work then it just doesn’t work. Melyza is at least willing to try and hopefully there aren’t any more secrets. The relationship will fail if Tim is withholding anything else.

Jihoon’s own secrets caught up to him. He let his wife spend all of her money and he couldn’t do the basic minimum. Jihoon lied to Deavan. He told her that he got everything ready for her and the kids to move to South Korea and the truth it he doesn’t have money. He’s borrowing money from his parents that he knows he can’t payback. He knows it because he spent his money drinking and on a debt. He owes thirty thousand dollars. He’s paying that back and not all that fully. He was still spending money by going out with his friends. His friends tried to warn him about his behavior. He didn’t listen and now he’s at risk of losing his family.

Deavan didn’t want to stay at the apartment. She was going to the hotel with her mom. She also told Jihoon that she might as well go back to the States and, if she does, she won’t come back. Deavan needs a man. She, unfortunately, married a boy and she was tired of mothering three kids. Jihoon was simply too childish for anyone to tolerate. The only one willing to tolerate is his mother. His mother doesn’t understand why Deavan is giving up on her marriage. Jihoon’s mom thinks he’s just like all the other men in South Korea and that its okay to tell white lies to get a woman. Except he already got a woman. He married her and everything. And so he should have stopped lying.

Another one that could be lying is Sumit. Sumit told Jenny he couldn’t show her papers about his divorce because that’s not how things are done in India and so they saw a lawyer. A lawyer said that a divorce could last upwards of five years. He also said that Sumit’s case is different because Sumit and his wife both allegedly agreed to the divorce. It’s a different situation if both agree to their divorce. Then it could take five months and so that would be okay. Jenny was okay with it. Sumit should still have paperwork to show to Jenny and so it’s odd that he hasn’t. Jenny didn’t push him on that. She chose to let it go because she thought the divorce would be less than a year.

Jenny later met Sumit’s friends. She didn’t really get to meet them or their wives before because she had been a dirty secret when she last lived in India. Things were different now. Her relationship with Sumit was out in the open and Sumit was proud to show her off. He thought his friends would see what he sees whenever he looks at Jenny. Sadly, that wasn’t the case. His friends all call Jenny grandma and they laugh about how she looks when she’s with Sumit. The wives also didn’t approve and no one showed. The wives disapprove of the relationship between Sumit and Jenny. They didn’t want to get to know her and so Jenny was left without female friends.

Kenneth didn’t realize how dependent he’d be on Armando. He didn’t realize until they went outside and no one spoke English. He needed Armando to explain the money to him. He needed Armando to order lunch for him at a restaurant. He even needed Armando to explain Mexican candy to him. Kenneth is a germaphobe and so he didn’t want to buy candy for a vendor outside. He thought dirt must have blown on the candy. It had taken Armando convincing him to try it and he had to spit it out because it was too spicy. And so vacationing in Mexico was nothing like living in Mexico.