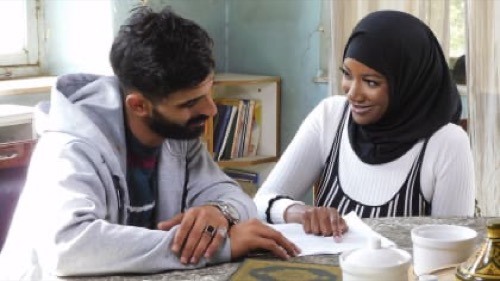 Kenneth used a ruse to get out of the house. He told Armando that he wanted to open a bank account in Mexico and he claimed he wanted to do it on his own, but the truth is he wanted to meet up with his daughters. His children secretly traveled to Mexico because Kenneth was going to propose. He was going to propose and he wanted his family there for support. He wanted them to witness this momentous occasion. Kenneth met the love of his life and he wanted to marry Armando. He didn’t even want to wait. He wanted to marry him now. It has taken Kenneth a long time to find someone. He came out in the 80s and in less than a decade half of his friends were dead because of the HIV/Aids crisis.

Kenneth has been in two committed relationships. Those relationships sadly didn’t work out because he wasn’t with the right man and so things were different now. Armando was the one who made all the difference. Armando and Kenneth having been living together for a week when Kenneth came to his decision. He felt that was enough time to realize to how right they were together as a couple and so he was going to propose. He was going to propose very soon. He brought his kids down there and, while two out of the four couldn’t make it, the remaining two that did show had questions.

They wanted to know why Kenneth was proposing now. Kenneth’s daughters questioned the timing of the proposal because again he hasn’t been living with Armando for long and Armando’s daughter hasn’t even moved in with them yet. There were still plenty of hurdles for them to overcome as a couple. Kenneth’s daughters were wondering why their dad was in such a rush and he couldn’t really explain it for them. It just felt right. Kenneth was happy. He was the happiest he’s ever been and if he says he’s ready then he’s ready. He wants to get married and he was going to propose no matter what anyone said.

Then there was Deavan. Deavan tested Jihoon and he passed. She asked him to come up with enough money to prove he’s been saving it. He later got his hands on that money and he handed it right over to her. This proved that Jihoon was ready to step up. It also showed that he was willing to do anything to keep his family together. They later got a new apartment and this apartment was so much better than the last one. For example, this one wasn’t located in the ghetto. It was right across the street from a park and there was a hair salon and nail salon nearby. It was a great neighborhood.

It was so great that Deavan’s mother didn’t complain about it once. If anything, her mother was conflicted. She wanted to bring her daughter back to the states and it was looking more and more unlikely to happen. She wasn’t going to be able to convince Deavan to leave her husband. Deavan wanted to work on her marriage to Jihoon. The couple promised each other to give each other one last chance and so far things are moving in the right direction. They’re happy. The kids are happy and the mother-in-law was for once happy as well. Now it will just come down to how long they get to stay at that apartment because Jihoon said he rented it for one month. And so it would be good to know what happens after that month.

Tim and Melyza were another couple discussing their possible future together. Melyza said she couldn’t be in a relationship without her parents’ approval and so she finally told her dad what Tim did. Tim cheated on Melyza. It was a brief thing and Melyza has known about it for a year. Her mother has also known just as long. Melyza told her mother right away and both of them have been keeping a secret from the father. The father didn’t find out about the cheating until after Tim moved down to Colombia. And by then, Tim was really invested in making things work and so its unfortunate he lost his future father-in-law’s respect.

Melyza’s father’s body language shifted the moment he heard about cheating. He crossed his arms and everything. He said he didn’t approve. He thought Tim had mistreated his daughter and he wanted the relationship to come to an end. Both of Melyza’s parents wanted her to break up with Tim. They couldn’t see a future between Tim and their daughter anymore and no one has asked her what she wants. Melyza says she needs time. She wants to understand Tim and see if they can work on their relationship, but its been a year since the cheating and so they should have hashed this out months ago. It should not have taken Tim moving down there for them to realize they needed to work on their relationship.

Brittany and Yazan were also dealing with difficulties in the relationship. Yazan demanded a lot from Brittany and he didn’t want to months or even weeks. He wanted Brittany to change for him now. He more or less demanded she convert to Islam or he wasn’t going to marry her. He waited until she flew to Jordan o be with him to come up with that ultimatum and so she was pissed. Brittany thought he should have brought up the conversion when they first met. He should have said then that he wasn’t going to marry her if she didn’t convert and then she would have been like “bye”.

Brittany would never have moved to Yazan if she had known about the conversion thing. He was even warned by his uncle not to pressure her and he did it anyway. Brittany was so upset with him that she got up from the table. She had needed a minute to clear her head and she came back when she was ready to voice what she felt. Brittany told Yazan that she does love him. She also said she didn’t feel like being pressured into a decision and that meant he couldn’t get her to convert in three days. She was going to need more time than that. Brittany needed time to come to terms with what she wanted and so Yazan back down from pushing her.

Also, Deavan and Jihoon talked to their parents and they asked them to be less involved. They said they wanted to work on things together. They didn’t necessarily want their parents to be making all the decisions for them and so hopefully the young couple gets what they asked for. Everyone was heading back to the apartment when Deavan’s daughter ran off on her own and everyone had to chase after her.