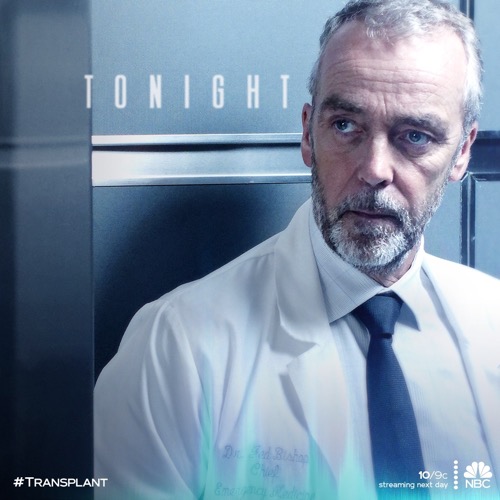 Tonight on NBC the hit Canadian drama Transplant makes its American premiere with an all-new Tuesday, September 22, 2020, episode and we have your Transplant recap below. In tonight’s Transplant season 1 episode 4, “Saleh,” as per the NBC synopsis, “When Bash’s friend from Syria reaches out for his help treating patients, Bash works to balance the hospital with his ties to home.”

Bash didn’t really leave his past in the past. He was still a trauma doctor. He had to start over his residency when he came to live in Canada, but that doesn’t erase his experience or stop him from occasionally assisting doctors back home. Bash left friends back in Syria. He still wanted to support them and so he “assists”. He talks them through difficult procedures and he was assisting one such doctor who also turned out to be a friend when he was almost caught. He was almost caught by a nurse at his hospital. Bash was in the supply closest when he took the call because he didn’t want anyone to know what he was doing and so he did his best to cover up his phone call. Bash couldn’t afford for anyone to figure out what he was doing.

Bash could risk his job. He was on thin ice as it is because there were some that didn’t trust him at the hospital nor did they think the hospital should risk legal action by keeping him hired. Bash had been honest with the legal team. He told them he was considered an enemy of the state back home because of his subversive views and the actions he took to save other people. He can never go home again because of it. He also was able to come to Canada because of it. Bash wanted to keep being a doctor and so he couldn’t just cruise along. He had to be the best resident he can be. He also couldn’t take risks unnecessarily and so he hastily said goodbye to his friend from home.

Bash tried to pretend like everything was normal at the hospital. He told the nurse that nothing was going on and he went back to work. He treated a mother and daughter team that came in following a car accident. The daughter survived. Her mother on the other hand didn’t make it and it was Bash that had to call the time of death. Bash also had to explain his actions to Dr. Jed Bishop. Bishop took a risk hiring him and Bishop too had to answer to legal. Bishop wanted them to know how great of a doctor Bash is. He, therefore, pushed Bash more than he did any other doctor and nurse Claire spotted it.

Claire saw how much pressure Bishop was putting on Bash to be perfect. She came to question why Bishop was doing so and he said he was doing his job. Bishop also talked about second chances. He and Claire used to be a thing back in the day. She was also the only person to push Bishop and so he misses her. He asked her if he could make her dinner. She then told him that he was about five years too late and so there will not a second chance for them as a couple. They will still work together and for now, they disagree on how to handle Bash. Bash was already treating his next patient. He was treating a young girl who appeared to be having a stroke and he didn’t really have much family data.

Jasmine was in foster care. She lived with her grandmother when her grandmother suffered a heart attack in front of her and so she then moved in with an uncle. He came to abandon her. He was now in jail and that led to Jasmine being put in foster care. She was placed with a great woman. The woman appeared to genuinely seemed concerned about her and it was rare that foster parents take in an older child. Jasmine was in her early teens. She was considered quite lucky to be placed at all and so Bash tried to treat her. He reached out to Children Services. He tried to get any medical information he could and they weren’t much help.

They only had access to Jasmine’s care while she’s been in foster care. The file they had on her wasn’t going to do Bash any good and he seems to have made a mistake in Jasmine’s treatment. When he suspected it was a stroke, there was an additional test that he had to run. He would have known that if he consulted with the pediatric doctor and he didn’t. Bash tried to do everything on his own. He took Bishop’s words about being perfect so much to heart that he tried to do it all and Jasmine’s health deteriorated. Jasmine’s life was saved thanks in large part to Bash working with Dr. Theo Hunter.

Hunter was one of the first to befriend Bash. He even gave Bash advice on what he thought was a hypothetical and what Bash later revealed was not. Bash was still taking calls from back home. His friend was a month out of medical school. He needed advice on about treating a young child who been involved in the blast and so Bash sneakily got advice from Hunter. He later told Hunter what he did. Which angered Hunter. He would have suggested other avenues the doctors treating the patient could have taken and so Hunter became got angry with Bash. He told Bash that no one man could do everything on his own. If Bash wanted advice, he needed to ask for help.

Hunter was going through his own issues as well. He left a wife and kids back home to do his residency. He plans on going back to join his father-in-law practice, but in the meantime, the separation has been hard on everyone. His oldest daughter was acting out and there was nothing he could do about it because he was not there. He did not have a foot on the ground. His wife was doing all that and she was pretty frustrated with doing it on her own when she’s married. It wasn’t until he was helping with Jasmine’s case that Hunter realized he could only help a child as much as they would let him.

Jasmine has type 1 diabetes. She was going to have it for the rest of her life and she was going to need help. Jasmine didn’t want to turn to her foster mother. Liz was still a stranger to her and sharing a house with a stranger was a lot more difficult than accepting help from one. Jasmine’s condition was found and treated. The rest she was going to have to do on her own and so there was nothing else Bash could do. Bash kept taking phone calls from his friend Saleh. He and Saleh weren’t enough for Saleh’s patient and so Bash brought in Hunter. Hunter was told about the situation. He was also told they needed his help and so he agreed to assist them in treating this young girl a world away.

Bash’s patient from earlier was also given justice. The man that drunkenly plowed down a mother and daughter was eventually caught. He was Mags’s patient and she convinced him to turn himself in. Mags hadn’t known what to do before that and so she got advice from Bash. Bash told her there was a risk of breaking the rules. He did that back home and now he can never go back. Bash helped Mags to realize she couldn’t protect her patient from himself. Mags also in turn convinced June to help make sure her patient still received the surgery he needed before he could be arrested.

Mags didn’t know that June’s father was also a drunk. He nearly ran the car off the road with her and her brother in the backseat. June ensured Mags’ patient got surgery because she wanted him to be well when he was sentenced.

Hunter meanwhile had his own world put in perspective. He called home to apologize to his wife for snapping at her and she told him that she was unhappy. She’s been unhappy for a while. She needed her husband at home with her. She couldn’t keep doing everything on her own and so Hunter doesn’t know how he’ll fix things.

Hunter and Bash were caught by Bishop. He found them on the phone call with Syria and he later told Bash that nothing like that could happen again. Bash couldn’t risk his future now that Bishop has helped him secure it. Bishop managed to get into contact with Bash’s medical school and he confirmed that transcripts do exist. This means Bash can continue to be a doctor at York Memorial, but he couldn’t risk it by being half in and half out.