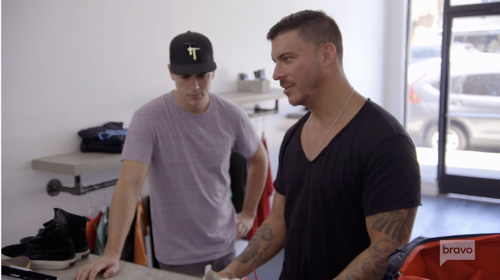 Brittany must again answer for Jax’s bad behavior when he lashes out at Max, and Raquel tries to persuade Lisa to give James one last chance.”

Scheana tells Dayna that she and Brett shot a music video in Palm Springs. She admits it is a sexy video but they decided to do this before he was with Dayna. Scheana shows her a clip of the video and Dayna is annoyed.

Jax hasn’t been hanging out with Tom but decides to go with him to shop for sneakers. They talk about their relationships and how Jax gets frustrated too much. He is sick of people not being honest.

Stassi and Brittany meet up with their dogs and talk about Stassi’s engagement and how she thought she was going to be a chill bride. Brittany plans to have a cook-out and asks if she will show up if Kristen goes. Stassi says she will be there.

Dayna is learning on the bar. Meanwhile, Jax airs his frustrations with Scheana about Kristen, Arianna, Tom, and everyone. Scheana asks if he is going to Max’s beach clean up. He says no.

Lisa brings her dog to Vanderpump dogs. Lala tells her how James hasn’t been drinking. Meanwhile, at James’ house, he is excited to be invited to Max’s beach clean-up. He hopes he is enough sober.

At Max’s clean-up, the gang gets to picking up trash. Kate thinks the beach is already clean. Dayna, Lala, and Brett talk about the video with Scheana. He tells them he felt violated. She even offered to do certain things.

Max and Tom S. Talk about Jax. He has been in a mood lately and seems jealous of their plans to clean the beach. Brett and Max talk. Brett asks how he would feel if he hooked up with Dayna. Max doesn’t want to talk about it. Brittany shows and she tells them Jax just didn’t want to drive. They ask her about his attitude lately. She is sick of having to defend him.

Lisa asks Raquel if James is really not drinking. Raquel shares that he isn’t and is doing well. Their relationship is better and different.

Kate and Tom arrive at Arianna and Tom’s for dinner. Max, Dayna, and Scheana arrive shortly after. They talk about how Jax has been rage texting them all. Scheana thinks Jax is fighting with them all because he is jealous and it isn’t about him. They all sit to eat. Arianna doesn’t want any negativity.

After dinner, Max and Dayna sit outside and talk. He shares that he still has feelings and it is hard to see her with Brett. Dayna tells him as soon as a new shiny thing comes by he will be off to focusing on that. He tells her that isn’t it. He really likes Dayna and it scares him. Dayna is confused. She tells him she is getting whiplash.

The gang is all together eating snow cones and shopping. Scheana tells Brett their friend needs him for a little bit for the music video. Dayna is there. Brett tells her he was uncomfortable and hopes he doesn’t have to take his pants off or if she will lick her ear. She tells him it is just acting.

Jax finds Max and apologizes and shares he is going through some mental issues. Max doesn’t say it to him but he thinks he is full of it. Meanwhile, Brett and Scheana are arguing about the video.

Jax gets into a fight with Kristen because she just had sex with Carter and now he has seen a video of her having sex on video with someone else. Kristen says it was 4 years ago that the video was made. She tells him it is none of his business but Jax knows she is lying. Kristen is lying but isn’t going to tell him. Jax is sick of her being a liar. Brittany tells him to calm down.

James and Lisa sit and talk at Sur. He wants to work for her again. She thinks he is different now and offers to let him DJ in the lounge.