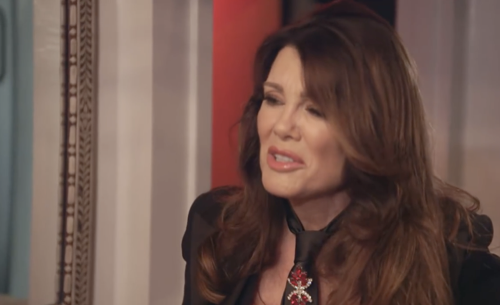 Forcing everyone to choose sides once and for all; Brittany blames Katie for the rift in their friendship, while Max and Brett nearly come to blows over their feelings for Dayna.”

Tom and Tom show up to SUR to clean the bathrooms after losing the softball game. Lisa finds them and wonders what they are doing. She jokes they could be shaving her legs. Tom Schwartz imagines that for a moment.

Tom and Tom run into Brittany and talk about how they are throwing a pool party the same day Jax is. She blows them off and walks away. Brett and Dayna go out for drinks at Hyde. They talk about Max and how he was cool about Brett dating Dayna and kissing her but nothing more.

Brittany comes home to tell Jax about the pool party that both Toms are throwing. Jax knows this is all out of spite. Brittany is annoyed because they ordered a big slide. Brittany thinks if he didn’t rage text then this wouldn’t have happened. Jax gets annoyed. He needs to go to the gym. This will be the third time today.

Lisa arrives at TomTom to tell them that they are being interviewed by Hollywood Reporter. Lisa also tells them they made a profit in their first year and she wants to expand their space by adding The Garden. They need to think it over.

Lala arrives to see Brittany. Jax calls her back and starts freaking out on the speaker about how his wife thinks he is messing around on her when he is at the gym. Lala tells him to calm down. Brittany yells in the background to calm down too and that she loves him. He hangs up. She has had it with his craziness. They call James to DJ for Jax’s party but he is going to Tom’s.

Lala and the rest of the gang arrive at the comedy club for Dayna. Max and Brett are both there. Stassi makes a joke about Dayna’s two boyfriends coming to support her.

At SUR, Arianna tells Lisa about the pool party dilemma. Meanwhile, Dayna and the gang head to a bar to hang out. They talk about pool parties. Lala is going to Jax’s. They go back and forth. They then change subjects to Dayna and Brett making out. Silence ensues before Max gets annoyed and voices his feelings. Dayna shares that she and Brett like one another. Scheana gets involved. Dayna tells her to be quiet. Beau thinks they need to stop talking. Lala calls them all messy.

Ariana and Brittany are at a charity house with Lisa. Brittany tells Lisa all about the pool party dilemma. Ariana thinks Brittany needs to see that Jax is the problem.

Tom and Katie are out to eat. They talk about TomTom and The Garden. Brittany texts Katie that she heard it was her idea for Tom’s party. She calls Brittany on speaker and they get into a fight.

Jax comes home to see Brittany. They talk about Tom and Katie. Meanwhile, everyone is showing up at Ariana and Tom’s. James is the DJ and everyone is drinking and having fun. Over at Jax and Brit’s, Brett and Lala arrive before Stassi and Beau. At both parties, they talk about the Dayna, Max, Brett drama.

Kristen tells Ariana that Stassi has been making fun of her because she doesn’t have furniture. Ariana gets annoyed. While the other party and dance, Tom and Tom talk about the restaurant. James comes to see them. They. Are proud of him and his change. He agrees to DJ at the TomTom anniversary party.

Stassi sits with Jax to talk. He feels like he is losing it. She tells him he needs to take control of himself. He is scared.