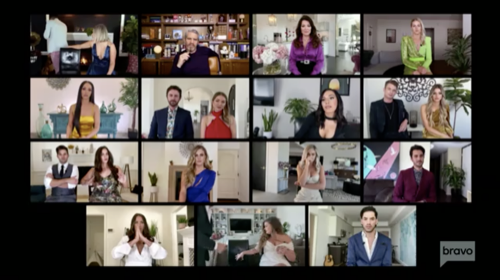 It’s part two of the reunion. Sandoval and Jax are going at it over Jax’s wedding. They have since decided to take a break from their friendship.

Moving on, Scheana and Dayna’s relationship is brought up. Everyone thinks it’s over Max. Scheana says she just wasn’t into making new friends. Lisa believes it was a competition and it did involve Max. The truth comes out that well Scheana and Max were in Palm Springs, the two hooked up.

Next, they talk about James and his bad behavior and how it eventually ended in a wake-up call. They re-camp the season, showing James’ bad behavior. Eventually, he gets help and begins going to AA meetings. They all talk about how proud they are of him. He has almost been sober for 11 months. They applaud him and Racquel for helping him. Kristen is making faces. She is asked what she’s thinking and shares that she just can’t deal with James.

Kristen gets very upset with James. She cannot believe the way that he treated Raquel. Raquel and James both acknowledge his behavior. Lisa shares that she is supportive of James again because he has turned his life around.

Lola is also celebrating sobriety. It has been one year. They discuss Lala’s past arguments and how she wants to attack Racquel. She also apologizes to Scheana for making a comment about her crop tops.

They roll the clip of what the cast has been up to during the quarantine. Stassi has been cooking well Lisa has been doing house cleaning. Jax and Britney have been doing obstacle courses. Kristen has been spending time with her new boyfriend Alex.

They get into strip clubs and how Jax says it isn’t his thing. They roll the clip of him thoroughly enjoying several females grinding all over him. The topic brings them back to Jax and Sandoval’s troubled relationship. Jax thinks Sandoval is just a great actor, calling him a fake friend.

They discuss the garden. Lisa shares that it was shut down due to COVID. Tom and Tom both raised money for their employees, totaling 50,000.

The topic goes on to Scheana and Brett’s relationship. They argue over their friendship and other romantic things that happen between them. Brett calls for a middle-aged and the rest of the women get annoyed.

Kristen, Stasi, and Kate had a tough season. Kristen admits that everything was taxing for her and them during her relationship with Carter. Stassi and Kate tell her that it’s not just about Carter but about her back-and-forth and how she made them look like jerks most of the time. James interjects, calling Kristen sad because she hasn’t moved on and isn’t planning a life.

Kristen shares that she, Kate, and Stassi have not been talking. Stassi cannot answer if she will invite her to her wedding.