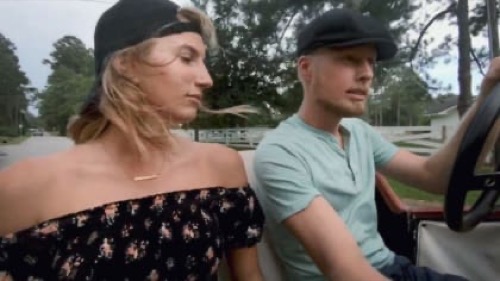 Tonight on TLC their reality show Welcome To Plathville premieres with an all-new Tuesday, November 10, 2020, episode and have your Welcome to Plathville recap below.  On tonight’s Welcome to Plathville season 2 episode 1 called “A Family Divided,” as per the TLC synopsis, “The Plath family deals with the fallout from some major recent changes. They left the farm and moved into town, Micah and Moriah fled the nest, and Ethan and Olivia cut ties with Kim and Barry. Although they all live within a mile, the distance has never been so great.”

The Plaths are a family of eleven living in south-eastern Georgia. Barry and Kim have chosen to raise their children far and away from the outside world. They don’t watch television or go to the mall. The children are also all homeschooled. They grew up with each other as friends and that proved to be a good thing as the children slowly became disillusioned with their parents’ lifestyle. Micah and Moriah were asked to leave home when they began going into the outside world. The siblings rented a house together and they were enjoying their lives. They wish they could see their younger siblings more, but their parents will only allow visits if they can supervise them.

Barry and Kim don’t want their older children to sow seeds of rebellion or bitterness amongst the younger ones. It wasn’t just Micah and Moriah. Their oldest son Ethan also doesn’t want anything to do with them and so he and his wife weren’t allowed unsupervised visits either. The oldest three children have all gone their own ways. The next in line was the Plaths’ daughter Lydia. Lydia has so far not shown any indication that she wishes to rebel against the only lifestyle she knows and she welcomed moving into the new house. She now has a prayer room. She’s always wanted one and she goes there now to get understanding whenever she has an issue.

Lydia is currently of the mindset that her older siblings have been led down the wrong path. She especially doesn’t understand where Ethan is coming from and so it’s good that Ethan gets to speak for himself tonight. Ethan rejected the way he had been raised. He told his parents he didn’t want anything to do with him and still, they left their large prosperous farm in order to move less than a mile away from them. Ethan now runs into them at the supermarket or when he’s on his way to work. He did his best to get away from them and they followed him. They followed him and they enacted that new rule about supervision.

Last year, Ethan and his wife were allowed to see his siblings. Then his parents developed a problem with his wife and they treated his wife like an outsider. Ethan’s parents wanted him to choose between them and Oliva and he chose Olivia. Which is something his parents weren’t expecting. They thought Olivia was driving a wedge between them and their relationship with her has gone so far south that Olivia begs her husband to take the back roads into town so that it lowers the risk of running into his parents. She doesn’t want to see the elder Plaths or speak to them. Ethan also doesn’t want to speak with them and so right now he has no relationship with anyone at the new house.

Ethan was still in touch with Micah and Moriah. The two siblings live nearby in their rented house and so that was another reason why their parents moved so close by. Neither Kim nor Barry were truly ready to give up control of any of their children. They were using this supervision rule to pressure the older ones into following their rules and it hasn’t been working. The family has been on the outs for a while. There’s been no contact since the older ones chose to end a relationship with their parents and that was only changing now because both Micah and Moriah miss their younger siblings. They want to check upon them. They want to remind their siblings that there is another way and that they’ll always be there for them.

Micah and Moriah coming over to the house was great for everyone. The younger siblings were all so excited about seeing them that they raced down the stairs and went straight for the hugs. It was also great for the older siblings to see them. Micah and Moriah haven’t had contact in four months and in that time their brother Isaac has gotten so tall. He was almost as tall as Micah. Micah wishes he could have talked to Isaac on his own, but his mother sat in the corner and she watched him talking to his brother. She made sure he wasn’t “planting” any subversive thoughts only he managed to get a few comments in.

Micah told his brother Isaac to respect their parents. He also said he should start learning to think for himself because Micah struggled with living in the real world and their parents didn’t prepare any of their children properly. Their parents homeschooled the kids. They created lesson plans on keeping their children away from “evils of the world” like pop culture, social media, and cell phones. Their parents have cell phones. They use that to text Micah and Moriah in case of an emergency and Lydia was going to ask her mom to text Moriah so that she could visit her sister at her new place. Lydia does miss her sister.

Lydia was happy living at home. She doesn’t plan to live at home for her whole life and at the same time she wasn’t in a rush to leave like Moriah was. Lydia respects her sister and her sister’s choices. She was so much more mature than her parents were about it. Their parents later spoke with both Micah and Moriah on their own and it was clear they didn’t want to understand where the kids were coming from. Both Micah and Moriah were frustrated with the way they were raised. They weren’t taught anything significant about the outside world nor were they prepared at all and it’s not like the family can continue to ignore what’s happening around them.

Also, the siblings wanted some distance from their parents. They thought moving out would be enough and it turns out their parents are still keeping tabs on them. They know every time Micah has a photoshoot. They know that Moriah has a boyfriend and she told them she wasn’t going to talk about it with them. Moriah chose to talk about her GED. None of them have their GED and so they have studied for one. They have to go through that before they can start thinking of college. They also have to decide what kind of college they can do while working and so if there was one thing to say to their parents – it was that they hoped the younger kids were better raised than they were.