When Will Soap Production of New Episodes Restart, June 12 or Later – Here’s The Truth Revealed for Y&R, GH, DOOL & B&B 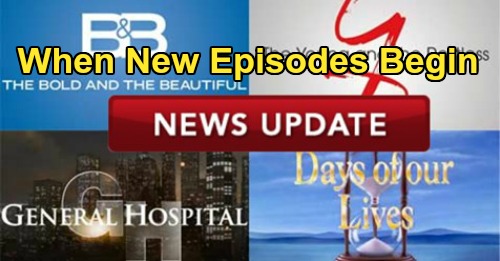 There are some news updates to report about the potential for soaps to begin production again. General Hospital, The Young and the Restless, Days of Our Lives, and The Bold and the Beautiful are all eager to get back to work filming new episodes and below is truth about how soon that might be.

Soaps fans are anxiously waiting for GH, Y&R, and B&B to resume production so that they can get back to their beloved storylines, but it seems that an actual hack to work date is still up in the air but moving in a positive direction.

On Friday, June 5th, California Governor Gavin Newsom announced that the state could resume TV and film production as soon as June 12th. That sounds like good news, but it’s still not clear whether the reopening for production will include Los Angeles County, which is where the soaps and most TV shows film.

Governor Newsom has stated in the past that there needs to be plans in place in the event that a rise in COVID-19 cases were seen again. Well, given that there was just a slight uptick in the number of cases, it makes one wonder whether the June 12th production resumption date is at all feasible in LA County.

We should note that the California Department of Public Health has stated that: “Music, TV, and film production may resume in California, recommended no sooner than June 12, 2020, and subject to approval by county public health officers within the jurisdictions of operations following their review of local epidemiological data…”

Now, whether the slight uptick in the number of cases that was reported yesterday will be an ongoing upward trend remains to be seen. It will likely be evaluated on an ongoing basis, so the next few days could be critical in terms of what the data show in LA County.

So, where does that leave soap fans? Well, it seems that uncertainty still shrouds the issue of whether production will actually be able to begin on June 12th. Note that the guidelines recommend the production begin no sooner than June 12th, and given the need to watch for trends in the number of cases reported in LA county, it could be far later than June 12th at this point.

We’ll be sure to keep up with this ongoing story and let our soap fans know how the situation is unfolding and when we can reasonably expect soaps to go back into production. Stick with CDL for all your soap updates – we’ve got all your spoilers and news right here.