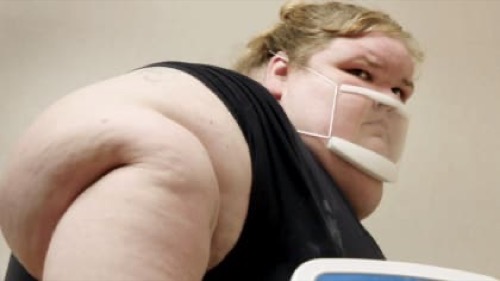 Tonight on TLC their fan-favorite series 1000-lb Sisters airs with an all-new Monday, January 25, 2021, Season 2 Episode 4 and we have your 1000-lb Sisters recap below. On tonight’s 1000-lb Sisters season, 2 episodes 4 called “A Fork In The Road,” as per the TLC synopsis, “The Slatons are shocked by the cause of Amy’s trip to the emergency room. Chris and Tammy see a new doctor, where Tammy must step on the scale again after a month of not sticking to her diet.”

Amy is on the phone from the ER. She is hysterical. Hours later, Amy comes home. Her blood pressure shot up because she ate Chinese food for breakfast. Michael tells her show she was off the wall on the way to the ER. Amy realizes she needs to stop having cheat days. She needs to protect the baby.

Amy and Michael have been told the sex of the baby. They decide to make videos for fans. They share the exciting news that they are having a boy. They talk about names; Thomas Wayne, Gage Dion,

Amy surprised Tammy with a spa day at her house. Their hairstylist Michael comes over. Amy tells Tammy that she and Michael are going on a babymoon. Tammy seems annoyed but tells her to go. She will be fine. Tammy talks alone to Michael about going to have surgery.

The next day, Amy finds a ton of candy wrappers in the trash. She is mad that Tammy is eating junk. Amy doesn’t confront her as they talk about Tammy going to the doctor with Chris.

Amy and Michael head to Georgia. They are excited to take a little vacation.

Tammy cooks dinner for herself. She has some trouble. Her belly hits the stove. She needs the surgery. She wants to live longer and she has been in a lot of pain in her joints. Tomorrow she will see the doctor with Chris.

Amy and Michael arrive where they are staying in Helen, Georgia. She feels like a princess. They get into the jacuzzi shaped like a heart and laugh. Meanwhile, Chris picks up Tammy in the van. It seems like she may have gained weight since last month as she has trouble getting in the car.

Amy and Michael’s sightseeing. She is really enjoying herself. She sees candy apples in a shop but doesn’t give in. They head back to the hotel and eat salads.

Chris and Tammy arrive at the doctor’s office. She hopes he isn’t going to be a jerk. Doctors in her opinion can be real smart Alecs sometimes. They go in and talk to the doctor.

The doctor asks about their eating habits. Chris asks about having surgery. He is hoary when he weighs in under 400 pounds. It is Tammy’s turn. She doesn’t want to get on the scale. She weighs 644 pounds. Chris cannot believe it.