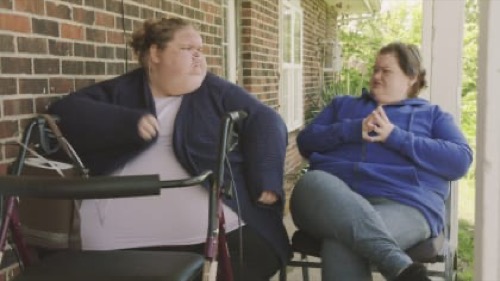 Tonight on TLC their fan-favorite series 1000-lb Sisters airs with an all-new Monday, November 22, 2021, Season 3 Episode 2 and we have your 1000-lb Sisters recap below. On tonight’s 1000-lb Sisters season, 3 episodes 2 called “Goodbye Freedom,”  as per the TLC synopsis, “Tammy is back from rehab, and Amy kisses her freedom goodbye as she comes to a decision regarding her sister.

With his bariatric surgery on the line, Chris tries to shed the weight he’s gained but is shocked when he and Tammy step on the scale.”

In tonight’s episode of 1000-lb Sister Wives, Tammy and Amy are on the outs. They got into a fight when Amy tried to help Tammy get her medication and she ended up interrupting Tammy while she was filming a video for social media. Tammy then lashed out at her sister. She kept calling her sister stupid and her sister stormed off. Amy doesn’t have to help her sister.

She does it because she cares and because Tammy needs help. Tammy was over six hundred pounds. She needed oxygen and she couldn’t go very far or walk very fast. Tammy recently lost some weight when she was at the bariatric center. She was expected to keep losing weight now that she’s on her own and unfortunately Tammy was pushing away people now when she needs the most.

Tammy pushed away Amy. She just expects Amy to do everything for her and without a thank you or even the slightest sign of respect. Amy takes people for granted. She doesn’t see that and so she complains about how no one wants to help her because they’re all too busy doing whatever.

Tammy especially hates it when Amy uses her baby as an excuse for why she couldn’t come around. Amy is a new mother and her son is a few months old. She doesn’t have time running after Tammy or dealing with her temper. She is a mom, but she’s not Tammy’s mom and so Amy hired home health nurse for her sister. Tammy hated the idea. She thought Amy should take care of her while everyone else thought it was a good idea.

Chris thought it was a good idea. Chris had surgery on his leg and so he couldn’t work out for weeks and in that time he’s gained forty pounds. He needed to lose the weight to qualify for surgery. So, Chris has been doing some cross-fit. He’s been working out and he too couldn’t cater to Tammy.

Tammy was downright unpleasant to people who care about her. She snaps at everyone and she gets upset when they put others before her. Tammy left the center in spite of it helping her because she expected her family to do everything for her. She would get mad when they interrupt her filming. She could easily put the camera and retake the shot and so there was no need to snap at people over this. And yet she does.

Tammy wishes she could have had a say in the decision to hire the home health nurse. She did not get one and her family were the ones who agreed they would hire someone. Amy also made the flier. She made it out that Tammy was a nice person and that she was chipper. She failed to mention the attitude or the entitlement. But Amy did ask Tammy what she was looking for in a nurse. Tammy wants someone who will take her to the gym and cook healthy food for her. She also asked that the nurse would be someone she could get along with. Like a friend. Tammy doesn’t want someone judging her and Amy thinks differently. Amy thinks Tammy needs someone who will be tough with her.

Tammy thinks Amy should stop judging her. Amy had her son seven months ago and she hasn’t lost the weight. She also wasn’t making healthy food choices. She excused it when she was pregnant by saying she was eating for two, but what’s her excuse now? The baby is here. He is healthy and so Amy should go back to focusing on her weight loss journey. Amy and Tammy interviewed some nurses.

They ruled them out for one reason or another. They just couldn’t find the right nurse and to make things worse Tammy is dating again. Tammy is dating a guy she met on the Big Beautiful Women website. She met up with a guy who doesn’t date anyone under three hundred pounds and so he might be like her ex. He might try to sabotage her.