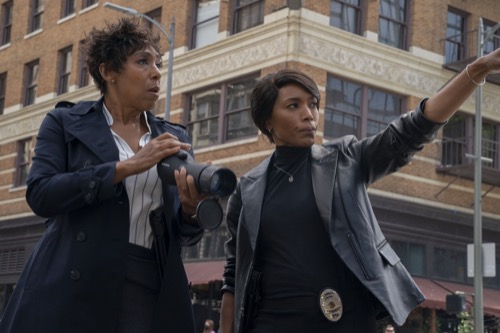 In tonight’s 9-1-1 finale recap, Eddie was shot. He along with his fellow firefighters were responding to an emergency when a sniper started shooting at them and it was Buck who pulled Eddie to safety after his injury. Buck rushed Eddie to the hospital. He handed Eddie off to doctors to be treated and all the while he and the others were still wondering what happened. Even Athena had questions.

Athena found out what happened to Eddie and she offered up her expertise to the detective working the case. She wanted to know what happened just like everyone else. The leading theory is that Eddie might have been the intended target. He’s former military and the sniper had to be militarily trained to make the shot. The police weren’t considering any other possibility until another firefighter was shot.

Buck went to go break the news to Eddie’s son that he had been injured and he broke down afterward. He’s been through a lot. He didn’t know how much it hit him until much later on and the threat wasn’t over. LAFD still has to do their jobs. They still have to go outside to help people in need and so now they’re at risk of being killed just for doing their jobs.

LAFD issued bulletproof vests to its firefighters. The police were also issuing bodyguards. SWAT will be watching over the fighters. They now have some form of protection and the police were continuing their investigation into the sniper. Athena was still working on the case. She was now afraid of her husband going to work because of the risk and so that made her realize what it was like for Bobby.

Bobby almost lost her after she had been attacked. She had been beaten so badly that she had been put in the hospital. It was Bobby who found her like that and he came close to losing her. If something had happened to her or if she died, it wouldn’t be the first time that Bobby had to bury a wife. He’s been through this before and he wishes that Athena consults him on her decisions.

Athena had the opportunity to retire but she didn’t take it. She also didn’t mention it to her husband and so, yes, Bobby had been upset with her. He didn’t tell her about his thing because he wanted to punish her in a sense. Only that seemed petty and small once he had time to think about it. He apologized for his behavior and Athena apologized for hers. Their marriage was complicated.

They have a few things to work on like communication and so the good news is that they want to work on it. Bobby and Athena were now in a good place. It made things harder for when he had to go back to work and later Bobby’s team responded to an accident on a crane. They had to climb several feet into the air to treat the victim of the crane accident and they were exposed up there.

The police couldn’t protect them from that height. Buck volunteered to go up by himself and he helped save a man’s arm by doing so. Buck saved the day. He also risked his life and not everyone was happy about that. Bobby said Buck went full Buck. As in he acted before thinking and Bobby realizes that he just has to live with that because Buck will never change. Another person who realized that was Taylor.

She later kissed Buck. She wasn’t sure if she meant it or not because they agreed to be friends and so Taylor rushed out of the apartment before they could talk about it. Buck later received good news. Eddie woke up at the hospital and he’s on the mend. Eddie will be getting better. He also got to see his son via facetime.

There was also a break in the case. The bullet rounds that Athena and the detective found were traced back to the LAPD and so those bullets couldn’t be bought at stores. They had to be handed out by the LAPD. Athena’s Deputy Chief broke the news to her. She and the detective later arrested Kenneth Malone. He was former SWAT. He was fired after shooting a hostage and so Athena questioned him.

She was of a higher rank than the detective. She was a Sergeant and everyone figured Malone will respond well to that and he did. Malone told Athena that he chose to quit rather than live through a review because he didn’t want to put the police department through all the media attention. The bullets were traced back to Malone and yet he wasn’t the shooter. He buried his gun in the backyard after he quit. He also said that he didn’t hate firefighters.

The firefighters saved the life of the man he shot. They did what he couldn’t and he grateful for them. The police later found the gun buried like Malone said it was. It hadn’t been fired in months and so he wasn’t their guy. The police reissued a warning to firefighters. Everyone thought they had found the guy and they no longer had the vests or the police escort and so Bobby walked right into a trap.

He responded to a call from a man claiming he was trapped inside a burning apartment only to find the man who called it in perfectly well. He shot Bobby. Ethan wasn’t a victim. He was the sniper and he was former LAPD. Ethan had been fired after he lost it once Malone left and Ethan blamed the fire department. He says if they hadn’t saved the shooter after he OD then the shooter would have died months ago and he would never have taken hostages.

Ethan was also jealous. He said everyone views firefighters as heroes and sees cops as scum. He hated that. He shot Bobby. He didn’t kill him. He only injured him and he wanted Bobby to call back the firefighters that left but he refused and so thankfully Athena saved his life before he was shot again. Athena dressed as a firefighter. She went into the fire to rescue her husband and she took care of Ethan.

She got him out of the way. She also helped rush Bobby to the hospital and he was going to be fine. Also, seeing Athena walk through fire for him had helped heal after leftover rifts. The sniper was gone and the world’s greatest couple were back to their old selves.

Eddie was also released from the hospital. He spoke with Buck and he told him that he changed his will so that Buck will get custody of Christopher if anything ever happened to him and Buck accepted. Buck and Taylor also spoke. She now knows what she wants and she wanted to be with Buck. And hopefully one day Buck will see himself as less expendable.

And Maddie quit her job because she was suffering from postpartum depression but she spoke with Chimney and they’re going to get help for her.

Chimney’s brother was also on the mend because he tried out as a firefighter and he eventually became one.