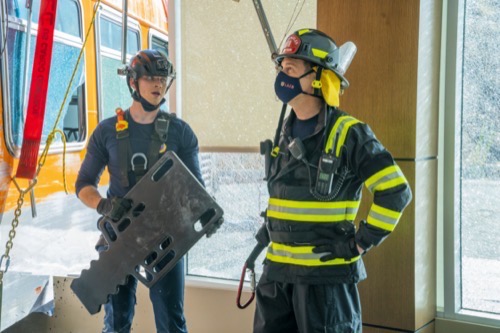 Tonight on FOX their #1 drama 9-1-1 airs with an all-new Monday, January 18, 2021, season 4 episode 1, “The New Abnormal” and we have your 9-1-1 recap below. In tonight’s 9-1-1 season 4 episode 1 as per the FOX synopsis, “When the Hollywood Reservoir dam breaks, Bobby and the 118 race into action to save passengers on a city bus that has crashed into a building several stories in the air.

Maddie must first locate, and then rescue, a trapped cyclist, and Athena help an agoraphobic woman evacuate her home. Meanwhile, the team adjusts to life as first responders during the pandemic.”

Back in September, the firefighters of the 118 were doing their best to adjust to the new normal. They like other essential personnel had to take additional precautions like living away from their families and remembering to put on masks as well as maintain six feet apart distance. No one wanted to bring the coronavirus home with them or risk infecting their loved ones.

Chimney however was taking on additional steps. The rest of his team were able to reunite with their families and he chose not to because his girlfriend is pregnant. It’s the first baby for both of them. Chimney wanted everything to go smoothly and so he was going to stay away until either virus evaporates or the baby was born.

Chimney didn’t leave Maddie to face her pregnancy alone. He asked his younger brother Albert to stay with her and his brother was taking care of her while Chimney was living with Maddie’s brother Buck. Buck was also a firefighter with the 118. The two were on the same shifts and they were also friends.

They were friends long before Chimney even met Maddie and so living together wasn’t a problem. It’s just that Buck didn’t really get Chimney’s reasons for staying away from Maddie. He thought Chimney should have moved back in with her by now and he wouldn’t mind having personal space again. Buck met someone during the lockdown. He talks to her every day for hours on end and he hasn’t introduced her to anyone in his circle.

Buck was keeping his new girlfriend to himself. He hasn’t talked about with her anyone nor has he told them her name. He was truly keeping her secret. If Chimney hadn’t been living with him, he wouldn’t have known about the new girlfriend. He knows now and he teases Buck about it. Buck doesn’t mind the teasing. He seems to have matured since the lockdown and so the two went into work like it was a normal day.

They experienced an earthquake. They’ve been having those for a while because all of southern California was having minor earthquakes and the firefighters didn’t think they had to worry about it but then they got the call. The call reported that this latest earthquake caused cracks within the dam.

The dam was holding back the Hollywood Reservoir. The moment it began cracking, all of that water poured through and it flooded the nearby area. It got the woman who was riding her bike. It got the man who was working on the dam. It even got a bus-full of people and it’s those people that the 118 was called about. They were called because the bus was run off the road and it collided with a building.

The water had forced the bus into the air before it crashed. The bus, therefore, was high up with nothing sustaining it and it was up to the team to save the day. They had to take an elevator just to get to the scene of the accident. And once they were up there, they needed to stabilize the bus in order to empty it out.

The bus also collided with a few people inside the building. Chimney treated the people that got hit by the bus and he eventually ran into a problem. The bus was on top of someone. A guy named Keith and he was alive. He was pretty out of it so he couldn’t crawl out from under the bus. They also couldn’t risk moving the bus or else it might kill Keith. Buck and Eddie had to stop stabilizing the bus and it was up to Bobby to figure out how to save everyone.

Bobby ultimately decided to save people on the bus first. He felt if they cleared the bus first that the bus will rock back once it was free of all the weight and that would give them the opportunity to reach Kenny. And so the only one stopping the plan was a kid named CJ.

CJ is a mentally challenged teenager. He was doing okay at first because he was helping the other passengers and so he didn’t have a problem until it was time for him to get off the bus. Bobby went on the bus to keep CJ calm. He still tipped the bus in order to free Keith and, for that, CJ was fine. It was when they were finally leaving the bus that they began to smell gas.

There was a minor explosion and Bobby used his own body to shield CJ. Neither of them were hurt. They were able to get back up and they left the bus. No sooner did the 118 save the day there that they responded to other calls. The crack in the dam had created a whole bunch of issues all over the city and the woman on her bike turned out to need help as well. And thankfully she had Maddie

Janell got swept up in the water from the dam. It carried her into an underground pipe that had been cleared of sewage and she couldn’t leave on her own. Her foot got twisted around. Janell was stuck in that pipe for a while so she got to thinking. She remembered how good things were six months ago. She had a husband and they had a beautiful life together.

Then the lockdown happened. Her husband got sick in spite of all their precautions and he died. He was the original biker in their family. He used to love riding his bicycle everywhere and after he died – Janell decide to buy her own bicycle. She had just started this new hobby when the dam broke and it nearly killed her.

Maddie talked Janell into going over to a lock box inside of the tunnel. She helped her to break it open with her tool kit and then she opened a grate inside of the tunnel. Her doing that helped them pinpoint her location. Janell had been swept from a cliff by the Hollywood sign to all the way near the ocean. She was later rescued and she thanked Maddie for helping her.

Maddie did a good job there. Athena did a great job elsewhere. Athena was just back after she had gotten beaten up and she was supposed to be easing into things, but all hands were needed and so she went to go clear the neighborhood directly in the pathway of the flood. And she ran into a problem when one of the evacuees refuses to leave.

Sylvia hadn’t left her house in seven years. She was scared of the outside world and the pandemic sure didn’t help to change her opinion. Athena had to go inside the woman’s home to talk to her. She did her best to convince her to leave with them and to evacuate in time. Only Sylvia couldn’t do it. She couldn’t leave and just as Athena was going to try talking to her again – the flood came and they were trapped.