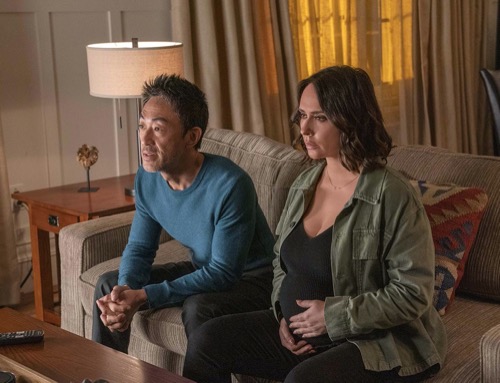 Athena hunts down a bank robber disguised by Covid protocols. Meanwhile, Buck confides in Maddie, Hen clashes with her antagonizing medical school lab partner and members of the 118’s crew prep for an out-of-state mission.”

A scorned woman called for emergency services after she hacked her ex-boyfriend’s house. He had given her the passcode to his smart home and so she later used that information to make his life a living hell. She made his house freezing. She turned up the temperature on him while he was in the shower and he passed out as well as hit his head from the heat.

The woman had been watching him and so she noticed that he cut his head on the way down. She called 911. She got Maddie and Maddie called for the 118. Her friends and family went to Anthony’s home. They got him out of the shower and they even told him that it’s a good thing his girlfriend called for help, but he said he doesn’t have a girlfriend. He has an ex and she’s been cyberstalking him. And so that’s when Athena was called.

Athena arrested their hacker. It turns out the woman was upset after Anthony asked for space and so she’s making his life miserable because she wants him to see how horrible his life is without her in it. Athena arrested this crazy woman and she felt differently about technology afterwards. She wasn’t sure she was ready for this new world. Athena was still struggling to get her daughter to drop her dispatcher job and go back to college.

She talked about it with her husband. Bobby doesn’t think they should underestimate Mae because she made it this far and soon she’ll be taking real calls. Her training is almost over. Mae has been doing well and there’s no doubt she’ll continue to be doing well.

Athena just has to accept what she cannot change. Bobby will do his best to help her and he’s there for anyone else on his team. The 118 has been through a lot since the pandemic started. Buck went to therapy because he realized he felt sad and lonely. His sister Maddie had helped him see it. He also told her that he always thought she was sad as well and so maybe she needs help too.

Maddie has been so focused on the baby. She had her brother baby-proof the house and she has Chimney building a crib, but she never dealt with her own trauma and speaking to her brother about his had reminded her that maybe she needs more help than she originally believed she needed. Her boyfriend hasn’t noticed anything is up and that’s a problem too.

Chimney doesn’t really discuss emotions. Even once he heard that Buck was in therapy, he didn’t ask him about it other than to say all firefighters need to get their head straight every now and then. Chimney doesn’t realize how far Buck’s problems truly do go. Buck is one of his closest friends and he doesn’t see it. He tends to be a bit oblivious about emotions because grew up never talking about his. His father is a stern man who demanded perfection and he rejected Chimney when he proved to be more human than perfection.

Chimney didn’t even talk to Hen about her issues. She was his best friend and he hasn’t asked her about med school. Hen started med school recently. She thought it was going to be great and, unfortunately for her, her fellow students weren’t all that happy to have someone as experienced as she is onboard.

Hen is struggling to make friends there. She needs the friends that she does to be there to reassure her and, while Chimney wasn’t perfect, he wasn’t getting better at talking. He overheard a crying Maddie one night. He asked her what was wrong and she told him how scared she was about bringing a baby into the world because she doesn’t want to be a bad parent.

Only Chimney told her that their baby will be fine as long as he or she has two parents that are willing to try. Chimney wants to try being a great father and so far he was helping Maddie to put her fears to rest because her tears did stop. She stopped crying. She thanked Chimney in her way for being there for her and so now he just has to keep doing that with his friends and family.

Hen’s problem was a young woman named Sydney. Sydney fainted when she had to cut open a cadaver and so Hen tried to cheer her up by telling her that she wasn’t comfortable either with her first emergency. However, Sydney didn’t take that the right way. She told Hen that she didn’t need her pity. She refused any help from Hen and it didn’t dawn on her until later on that snapping at her partner during an exercise might reflect badly on her.

Sydney realized that after their supervisor Dr. Langford was asking if everything was okay. That’s when she realized she needed Hen to back up her false claims that they work great together. Sydney visited Hen’s home out of the blue and she came at the worst time.

Hen’s social worker was there to check on Hen’s foster daughter Nya. The toddler had drawn all over her older brother’s face with a marker and he was still opening doors whenever someone rang the bell. Hen was at home alone with the kids. Her wife was off running errands and so she didn’t have time to deal with Sydney. She was going to dismiss her when Sydney said what she really thought of Hen.

She thought Hen was going to drop med school because she’s forty with two kids a mortgage. Sydney told Hen to not sink her career while she eventually left medicine to the professionals. Sydney was so self-absorbed that Hen slam a door in her face and told her to never come back.

Hen was so mad about it that she turned to Athena for advice. Athena told her to just deal with Sydney for the remainder of their team work and not to let the little girl’s opinions get to her. Hen took that advice. She went about med school and work like nothing had happened. She and the rest of her team were called out to a scene when a woman went blind.

The woman was a goat yoga teacher as in she teaches yoga with goats on her clients’ back and being around goats all the time had given her worms. Its why she couldn’t see. The worms were in her eyes and so Hen had to patiently remove the worms before she saw again and that’s when young woman realized maybe she should try bunny yoga.

Hen told the young woman that if she believed in goat yoga then she should keep doing it. Hen took that same attitude to confront Sydney and that conversation helped clear a few things up. Sydney calls from a long line of women who have never made it past the age of thirty five because of breast cancer. She fears it so much that she had a double mastectomy and her ovaries removed at age twenty.

Sydney wants to become a doctor because she wants to be the first woman in her family with a career. She was able to reach understanding with Hen because Hen is a black lesbian who became a firefighter at thirty and is now in medical school at forty. They’ve both overcome expectations and working together will be beneficial to both.

Hen solved her own problem. She was also able to laugh with the rest of the team after Eddie began fearing the Hildy. Hildy was the A.I. that did everything at the mere request of its owner and the team saw it in action at Anthony’s home. Well, Eddie had mentioned needing a coffeemaker while he was there. He said it front of the AI and later he found a whole bunch of advertisements for coffeemakers on his internet and so he tried to unplug everything at his house. And his son and Buck thought he went too far, so they sent him a coffeemaker powered by Hildy and it totally freaked him out.

Also, Maddie later found out her baby’s sex with Chimney. They were having a girl and so she thought now was the time to tell him the big family secret. The secret that Buck doesn’t even know about it.

And a few members of the 118 chose to travel to Texas for the overtime and to help stop the forest fire raging down there.