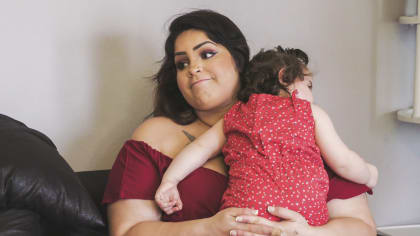 Yara starts a new chapter on her own. A misstep by Andrei causes Elizabeth to panic. Natalie makes a big decision without Mike.”

They came over for a visit and naturally, Tiffany found something to complain about. She complained about the new room. Ronald built a whole new room for her son who he treats like his own. He didn’t want the little boy to sleep on the couch anymore and Daniel loved his room. He loved he got to work on it with his dad. He also was glad he didn’t have to sleep on the couch. It was Tiffany that was complaining about the room.

Tiffany thought it might have cost too much. She was also upset because she said he didn’t go grocery shopping before they came and there had only been six eggs in the refrigerator. Plus, a beer. Tiffany hadn’t liked that and she told him she wanted to do shopping. She then later complained about the items at the grocery store. They served jail food according to her and she didn’t like anything she saw.

There was some pink bologna that didn’t seem real. There was also the worst part about grocery shopping and that was Ronald couldn’t afford it. Ronald didn’t have enough money to cover the costs. He spent most of his money on the new room and that validated Tiffany’s worries because she said the new room should have been lower on the list of priorities.

Andrei meanwhile pulled over the RV. He pulled it over because his sister-in-law Rebecca was talking crap to him and he just wanted to clear it up. This time Andrei wasn’t at fault. He was having a conversation with Chuck that Rebecca overheard and that she took exception to because she claims he was manipulating her father.

She later explained that her father never listened to any of her ideas. It, therefore, stunned her that he would listen to Andrei’s and so she blamed Andrei for it. Andrei isn’t a great or even sometimes good guy. He’s an over-entitled jerk at times and he does take advantage of Chuck by getting Chuck to pay for things but this time the fight wasn’t his fault. He really was minding his own business when Rebecca interrupted him.

Not only did she interrupt him. She also accused him of everything under the sun and she went into pure hater mode. The two of them were arguing about it as everyone still inside of the RV began to complain. They wanted to go back onto the road and for everyone to stop fighting. Even Andrei’s wife Elizabeth had enough.

She asked her father to step in because she figured he was the only one who could and so he did. He told them to stop finding. He said he wasn’t going to discuss business on the RV. He just wanted to go see his parents for the family reunion and he didn’t want his family at odds. Chuck doesn’t know why his children are so set against Andrei working in the family business. They think he’s trying to squeeze them out and he’s not.

Andrei doesn’t really want to work for Chuck. He wants to work for himself and so he’s learning as much as he can from Chuck in the hopes of Chuck funding his new business venture. That’s it. Andrei was literally minding his own business as Natalie was revealing secrets to her husband. Natalie has been suffering breathing problems for the past few months and Mike knows about it. He knows that she wants to fix it.

He just didn’t know that she scheduled surgery or that she told her Russian friend first before telling him. Mike was caught off-guard when he was told. He thought that as her husband he should have been told first. He also claimed that money isn’t an issue and that seemed like a lie to Natalie because she thought he was just saying that to save face in front of her friend.

Then there was Jovi. Jovi was supposed to be coming home soon and now he’s saying he needs to spend more time away. He might not even make it for Christmas. Jovi broke the news to Yara and she was pissed. Yara wanted Jovi back. She wanted help with their daughter and she didn’t wish to return to New Orleans. Since the pandemic, Yara no longer feels safe in New Orleans. She caught covid there and so now she wants to start over somewhere else.

Jovi agreed she could move. He also said that they could hire movers and he also offered his family to help. Yara was going to have plenty of assistance in moving. She just needs to figure out where she and her baby are going. She also needs to unlearn certain bad habits because the girl who used to refuse help is now taking advantage of her mother-in-law.

As for Michael, he’s living the sing life. He and his wife Angela broke up. Angela broke up with him because she didn’t like Michael having his own opinions or being upset about choices she made for herself and without his input. Angela didn’t act like they were married. She didn’t want to share decisions with him.

Only Michael liked his wife with a big chest. He didn’t see why she had to spend so much money on getting surgery on her face and more importantly, he was thinking of their future. He thought they should save money for fertility treatment. Michael doesn’t have kids. He wants kids and he wanted to have them with Angela but Angela wanted to be young again first. She was doing all these procedures to look younger and the more she thought about them the more she pushed Michael away.

Michael wasn’t even the one who ended things. In spite of his frustration, he still wants to be Angela and he still loves Angela and so it was her who said they were over. Angela threw it out like she normally does and this time Michael was running after her like he normally does.

This time Michael seemed to be done too. Then there was Julia and Brandon. The two of them were looking at apartments. They were serious about wanting a place of their own and so now they have to find a place in the budget. Apartments in the area cost upwards of eight hundred dollars a month.

It seems extravagant to Julia whose renting her apartment back in Russia for a hundred dollars a month and yet Julia changed her mind when she saw an expensive apartment. She saw a three-bedroom apartment that had everything she wanted. It cost eighteen hundred and that was more than their budget. Julia wanted to take and Brandon said they couldn’t afford it. They only have Brandon’s salary right now.

Julia received he visa that allows her to work. She just hadn’t found a job yet and so she couldn’t get an apartment like that without a second income coming in. Julia said she was going to get a job. She now has to. They have to start earning enough for the home they wish to share and they can’t turn to Brandon’s parents. His parents are simply waiting for him to fail. They want Brandon to fail because they want Brandon to stay at the farm and one day takes it over from there. They wanted Brandon out there living a dream away from them. They don’t even like it when Brandon has his own opinions. His parents are control freaks who want him back as their baby boy and they blame Julia for him refusing that role now.

Julia later applied for a job. She applied as a dance instructor at a gym and she’s going to have to fill in forms as well as do a test online and so it wasn’t just dancing. Dancing was simply the funniest part of the job. Julia had to create teaching plans and teach several classes of the day the same thing and it will be tiring. It’s not going to be the great time she thought it was going to be. It also might not pay her enough to get that dream apartment. Brandon and Julia are both starting out on their own. They need a deposit as well as three months’ rent and right now the only employment they can demand is Brandon’s. And so it’s great Julia is applying at places, but it’s going to be a while before they can move into their dream home.

Yara moved. She moved to the suburbs. It was quiet there and Jovi doesn’t really like quiet. He likes city life. He likes being able to run out and do anything because it’s within walking distance and so the suburbs are going to be an adjustment for him. Jovi will have no one to blame but himself. He really should have been there before the lease came up on their last place and he should have looked at places with his wife before leaving.

Now, he’s stuck with what she picked. He couldn’t say a word against it and he has to learn to like it. Jovi was being an absent parent because of work while Andrei was being an absent parent by choice. He was supposed to be watching their daughter Ellie when he went to use the bathroom. He didn’t tell anyone to watch his daughter while he was doing that and so Ellie almost fell down the stairs. And it’s lucky that Elizabeth caught her.

Elizbeth realizes now that Andrei has such a problem with admitting fault. He would rather yell at her and tried to blame her when all he really had to do was say sorry. He was in the wrong. He was supposed to be watching her and yet he took his eyes off the toddler so that he could use the bathroom. He did that in a house that was not their own.

That was unfamiliar to Ellie and that had stairs. Ellie naturally tried to climb those stairs and she was all the way up when she slipped and almost fell the whole way back down. It was a miracle she wasn’t hurt. Her mother had thankfully been there to catch her and she could have kept an eye on their daughter the whole time if Andrei had simply told her he was using the bathroom.

Mike and Natalie got into it over the surgery. Mike believes Natalie failed to communicate properly and now they’re arguing over it.

Tiffany and Ronald also got it because she told him she needed a break from the kids and he gave their baby girl a plastic bag to play with. Now, her not dying is pure luck. Tiffany blew up when she saw she wasn’t getting help from the kids and telling Ronald what to do wasn’t helping. Ronald would like to be asked, not told. And so he wasn’t much help.