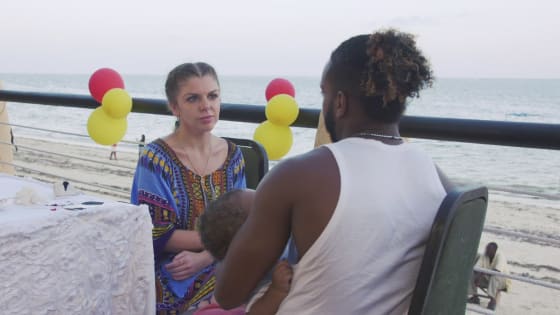 Tonight on TLC their popular reality show 90 Day Fiancé: The Other Way airs with an all-new Sunday, November 21, 2021 episode and we have your 90 Day Fiance: The Other Way recap below for you. On tonight’s 90 Day Fiance: The Other Way season 3 episode 13 “Don’t Overthink It,” as per the TLC Synopsis “Ari demands another sacrifice from Bini. Alina and Steven are running out of time. Victor is ready to call it quits with Ellie. Sumit confesses his betrayal to Jenny. Corey is dealt another blow to his wedding plans. Armando faces his fears.”

So make sure to tune in tonight between 8 PM – 10 PM ET for our 90 Day Fiance: The Other Way recap.  While you wait for our recap make sure to check out all our television spoilers, news, recaps, and more, here!

Tonight’s 90 Day Fiancé  The Other Way Recap begins now – Refresh Page often to get the most current updates!

In tonight’s 90 Day Fiancé episode, Alina and Steven finally start their marriage paperwork. She is not happy he took so long. They are cutting it close with 3 weeks before their visas run out. Alina is scared if they are separate he may start talking to other girls again. At the meeting they learn they have all their paperwork done correctly and can marry in 2 days. Steven is freaking out inside.

Bini and Ari have been in Kenya for 2 months. They are working on their relationship. Ari’s mom has left and wants her to try. They have been working on their relationship. It is Avi’s birthday. Together they all ride a camel. Avi loves it. After they sit and talk, Ari says she wants to live in the US. She cannot go back to Ethiopia. Everyone saw Bini’s bad behavior there. Bini agrees to go to the US.

Ellie and Victor are arguing about money. She wants to know how they are going to live and he doesn’t want to talk about money. He is also sick of her bringing up the money she sent him. Hey is happy he survived the recent hurricane. She is mad she is in this situation. She feels like an idiot. He feels like he cannot keep doing this.

Kenny is feeling emotional as the wedding is tomorrow. Kenny and Armando are in the car when Kenny reveals Taylor did not like their idea of adopting. Armando is wondering what Kenny is now thinking. He gets the kids probably feels like Kenny was taken away from them.

Kenny wants to let it go for now. They can deal with it later. Kenny wants to focus in their wedding. Armando brings up what their wedding will be like when it comes to affection in front of his dad. Kenny doesn’t want him to worry.

Corey calls his brother. His brother is not coming to his wedding and says it is because of covid. Corey vents. He wishes anyone would come. He feels so distant from his family. He is getting married and has no support. Corey’s brother feels like they are distant because of Evelin. She is making him live in Ecuador. She wanted to leave the US and now he is so far from his family.

Sumit is going to his parents to see his newborn nephew. Jenny is not going. It is for family only. Jenny thinks his parents need to get over it. They have filed their marriage application. Sumit admits he asked the lawyers to put it on hold. She is mad he hid this and did this behavior her back.

He shares he is nervous. People change. She is annoyed. She has been through so much for him.

Jenny tells him he either wants to marry her or not. She needs to go back to America. She gets up and storms out. He goes after her. She has had it. He asks her to calm down. She tells him to go to his family. He leaves.

Kenny goes to see Armando in bed. It is their wedding day. Kenny is thrilled. He is going to marry someone he loves who loves him back for who he is. Armando worries about them kissing in front of his dad. Kenny thinks this is their day and they should do what comes naturally. Armando is also wondering how they will dance. Again, Kenny tells him to relax and live in the moment.

Ari and Bini video chat with a immigration lawyer. Bini’s K-1 Visa process is moving forward. They can interview in 19 days but can not travel for 14 days so they need to go to Ethiopia. Ari is happy this is happening but it is going too fast for her. She also doesn’t want to go to Ethiopia where Bini acted badly. She is embarrassed.

Corey meets with Raul. They talk about how Corey moved out. He left because Raul invited two girls out to eat with them and then posted about it. Evelin saw this and was angry at Corey because they were separated and she thought he wanted her back. Raul is sorry this happened. Corey admits he cannot invite him to the wedding because of Evelin. Corey is upset because no-one will be there for him, friends or family.

Alina gets help from a wedding planner who speaks Russian to find a dress and location. They go shopping. She picks a very untraditional red velvet and white dress.

Alina calls to tell her mom she is marrying and found a dress. Her mom is worried. It is too fast and Steven was lying to her. She thinks she need to come home. Alina loves him and wants to try. Her mom thinks this is all too rushed.

Ellie is not sure if Victor is going with her to San Andres. They walk on the beach and stop and talk. They both feel bad for their behavior. Between the hurricane and the pandemic it has been a lot. After talking a bit, Victor proposes. He had a ring but lost it in the hurricane. He offers her a conch shell as a symbol. She says yes.

Jenny goes to temple and talks with a friend. She vents about Sumit. Her friend tells her not to be used by Sumit. He is getting all of the perks without marrying her. Jenny knows she needs to go back to thee US so Sumit he decide what he really wants. Jenny is at a cross road.