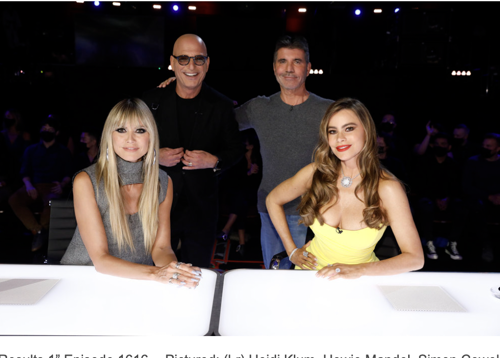 Tonight on NBC America’s Got Talent begins with an all-new Wednesday, September 8, 2021, episode and we have your America’s Got Talent recap below! On tonight’s AGT season 16 episode 18 “Semi-Finals Results 2″, as per the NBC synopsis, “Five acts will move on to the finals. Viewers can send their favorite performer to the next round by using the “America’s Got Talent” Official App or going to NBC.com to vote.”

In tonight’s America’s Got Talent episode it begins with Terry Crews telling us that there are just five spots left in next weeks finals and tonight we will find out which acts make it to the last step in the biggest battle of the season. We get a glimpse of the judges, Sofia Vergara, Heidi Klum, Howie Mandel, and Simon Cowell commenting on last night’s performances.

Terry welcomes the semi-finalists to the stage. Simon says watching everything back, so many were outstanding and he congratulates everyone. Terry names the three acts that are in danger Lea Kyle, UniCircle Flow, and Victory Brinker. All three acts step forward, America can put one of these acts through to the finals with their vote. Simon says that even though they are fourth, fifth, and sixth, they did incredibly well.

We are about to find out which acts made it right through to the finals. Terry invites Northwell Nurse Choir and 1aChord to the center of the stage. The first act through to the finals is Northwell Health Nurse Choir. He thanks the nurses for what they do and says he will see them next week. Heidi thanks them, she says it was a tough night last night but they did it, and keep up the amazing work they do.

Terry says that AGT has had 3 billion views and they have received an award for their achievement. Simon dedicates the award to NBC who bought the show when nobody else would.

The next two acts that are called forward are Kabir Singh and Rialcris. America has voted and the next act going into the finals is neither act. Sophia says she doesn’t want to say goodbye, she loves them both.

There are just four acts left on the stage, one is going home and one is going through. Brooke Simpson and Chapkidz step forward to the center of the stage. The act going into the finals is Brooke Simpson and she is shocked. Heidi thinks that last night a lot of people crumbled under the pressure bit, not Brooke. Simon tells Brooke that she deserves to be in the finals, but he is gutted that the Chapkidz left.

There are just two acts left on stage, Josh Blue and Peter Antoniou. America has vot4ed, the act going into the finals is Josh Blue. Howie said he is excited that two comedians are in the finals. Simon tells Josh to be more naughty in his final performance.

There are still two spots open. Lea Kyle, UniCircle Flow, and Victory Brinker are on stage. The act who won the Instant Save and is going into the finals is Lea Kyle, Heidi’s golden buzzer. Simon tells Lea that she deserves her spot in the final.

There are only two acts left. Heidi decides that she wants to put through Victory forward to the finals. Sofia says it is a tough night and it is hard to pick, but she chooses Victory. Next is Howie and he chooses UniCircle because he has never seen an act like theirs before. Simon is the one that has the deciding vote, if Victory is going to go through or if it is going to be a tie. Simon chooses to send Victory to the finals.