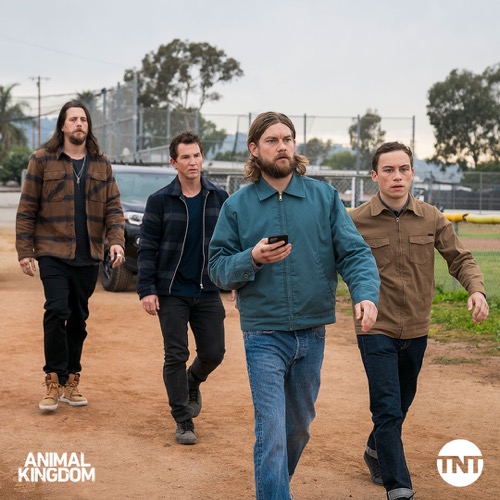 Tonight on TNT Animal Kingdom returns with an all-new Sunday, October 3, 2021 episode and we have your Animal Kingdom recap below. On tonight’s Animal Kingdom season 5 episode 13 finale  called, “Launch” as per the TNT synopsis, “The Cody family uses all their tools, tricks, and vehicles to pull off the job of their lives and settle all scores; a deadly secret from the past is revealed.”

Tonight’s episode begins with Smurf, she breaks into what is now the current Cody home has all the intentions of making it hers.

Deran hires the teenagers to help with the job, he tells them not to screw it up. Frankie checks on Craig, she brings him a coffee but he doesn’t want it. He tells her is done with the drugs, he is not a junkie, he just has to stop taking the drugs. He tells her the job is going to be fine.

Smurf is happy that Max is in the ground, she feels like the queen of Oceanside and wants to think bigger. Jerry, the cop on her payroll, brings Julia and Andrew home, they were caught trying to lift a wallet at the 711. She pays him off, he wishes her well and leaves.

Pope sees a picture of Julia on the mirror, he asks J when he put it up, he says a while ago.

Smurf is upset with the kids because they got caught. Jake is there and he is upset with Smurf, he tells her that she should want better for them. She tells him to go back to Sheryl and have his own kids, then he can raise them how he wants. Inside the trailer, Smurf asks Julia what happened, she says it is not fun anymore. Smurf asks if she thought about how good it would feel when she got the wallet, they could go to Disneyland. And, now they can’t because of Julia, because she made a mistake. Smurf tells her not to make a mistake again.

The Codys are at the shipyard. They make their way to a container, Pope and Craig find a safe and start welding. J is outside on watch and sees Wyatt in the office. The teens are on Skidoos and make a distraction for Port Authority. Pope tells Craig to hurry it up. One of the dockworkers is driving around and thinks he sees something, J backs right into him with a truck and apologizes, he says it is his first day. Pope yells at Craig that they go to go.

They got the safe open and there is a lot of money inside. More people are approaching J, the guy he hits is upset, J tries to say that he is new and he was backing up, he didn’t see the guy behind him. J is held at gunpoint and Wyatt goes to check out some noise he hears in the container. Wyatt opens the door, Pope and Craig make a run for it. J also tries to make a run for it and dodges bullets. Port Authority hears the bullets and heads towards the shipping yard. Pope and Craig get in the boat, J jumps in the water and the boys pick him up while Wyatt screams, “you’re dead.” Port Authority is chasing them in the water. They head under the pier, Port Authority loses them, then sees them coming right at them. It’s a dangerous game of cat and mouse. The Cody boys put on scuba gear, dump the bags in the water, and jump. Port Authority is chasing an empty boat.

Smurf brings the kids to the house while the people who actually live there are away for the weekend. The kids go play in the pool, Smurf puts some music on.

The Cody boys count the money, they have 1.2 million dollars. Frankie gets her share, she says she was happy to help and heads out. She says it was nice seeing them work together, Smurf would be proud. Pope wants the guys to have dinner together to celebrate. Craig goes outside and says goodbye to Frankie. Deran tells Craig to pick up dinner.

Pope and J head out to get a storage locker, but first, stop by to see Pete. Deran goes to pay Tommy, he gives him extra and thanks to him for sticking around.

Renn’s friend shows up to pick up her things, Craig wants to know where she is and finds out that she is with Nick at her cousins. He tells her if Renn doesn’t call him, he is going to through her stuff out.

Pope and J confront Pete, they go in the back to talk. Pope gets right in his face and says he stole from them and lied. Pete says Smurf is gone, things are different. Pope attacks him and pulls out his eye with plyers, there is blood everywhere. Pope tells him to give them their cut by the end of the week or he is going to take more pieces of him, J looks shocked.

Back at the house, Pope is washing his hands and tells Craig and Deran that he took care of Pete. J says he took Pete’s eye out, Pope says he was just reminding him of the rules.

Julie can’t sleep, she is worried the people are going to come back to their house. She gives Julia booze to make her sleep. Smurf tells the kids that she is going to get the house for them, she tells Andrew to come close to her, he tells her the house is big. She says it is perfect because they are going to have a little brother and they are all going to live there together, do what they do and have fun. Julia asks if Jake is the daddy, Smurf asks if it matters.

The Cody boys are having their dinner together. J says they can push as much money through the bowling alley as they can. Deran calls a toast and says may they all get what they want.

There is heavy police called into a development site, there is a dead body found and it belongs to Catherine Belland, they find her passport in a suitcase that was buried with her.