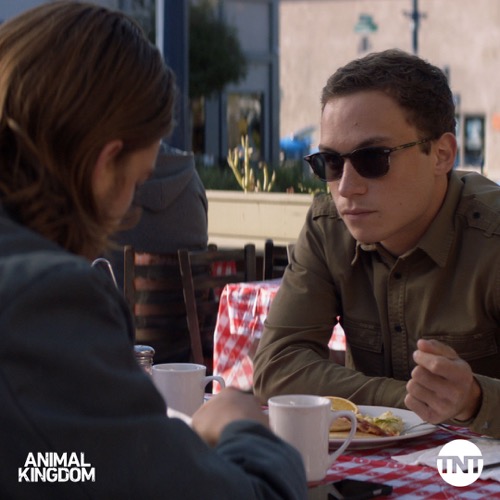 Tonight on TNT Animal Kingdom returns with an all-new Sunday, September 26, 2021 episode and we have your Animal Kingdom recap below. On tonight’s Animal Kingdom season 5 episode 12  called, “Loose Ends” as per the TNT synopsis, “The Codys resolve unfinished business and plan their biggest heist ever without Smurf.”

Tonight’s episode begins with Craig who is snorting coke when Frankie shows up, he lets her in, she has a coffee for him. He says he has to go help Deran with a job. He updates her on the job and she tells him that she might have to take him up on the offer to stay.

Pope is listening to the police scanner, they have found Livengood’s car with his hand in it. Craig shows up and says Frankie wants to get paid, J tells him to stall her as long as he can.

Pope sees that Craig is high, he tells him that if he doesn’t stop using he is not going to see his kid. Pope says he can’t go a day without it. They meet up with Chadwick and Pope tells him that it has been taken care of, but they need a few days to get the cash together. Chadwick tells them that they have until the end of the day tomorrow, and he wants more money.

Smurf is in the car with the kids, along with Manny and Jake, they get into the bar. Smurf plays music and starts dancing. She tells the kids that if they see something they like, take it. Smurf goes into the office and finds a gun and some coke. She goes through the filing cabinet and looks in some folders that make reference to a safe, she and Manny find it. Inside, there is a stack of cash another gun, and a book. Smurf asks Julia if she found anything, she says no and looks really uncomfortable.

Pope and Craig head to the garage and Pope sends a message through one of his men if he has something to say to Pope or his family, he knows where to find them. Pope finds out that there is a load of coke in the trunk of a car that he was about to steal, Pete didn’t flush the coke.

Craig is home and he is steal flipping from the coke, he finds some pills and takes them. There is a knock at the door, it is Frankie, she has her suitcase. She says everything worked out with her friend in Costa Rica. She tells him that she needs him right, he says he is right. Then he goes to the bathroom and pops a handful of pills.

Julia and Andrew are outside, she tells him that mommy killed that man. He tells her that they aren’t supposed to talk about it. Julia wants to know if there is something wrong with her.

J and Deran are scouting out the job location down at the docks. J asks him if he thinks Smurf would have done this job, Deran says it is a lot of money, he doesn’t know.

Smurf is at the beach with Manny and Jake, the book they found has the contact names and phone numbers of all Max’s ruthless contacts. Smurf says they can use the info to make their own network. Jake tells her to go home, her kids saw her kill a man. He brings up Colin, she gets mad and leaves.

Pope tells Craig that the cops found Livengood and so far they are blaming it on the cartel-like J said. Pope calls out Craig for taking Oxy, he tells him that he is out of his mind and everyone is sick of it. He tells him that he is lucky Renn took his kid away, he shouldn’t see his father like this.

Deran and J sit down for lunch, he says he doesn’t even recognize Oceanside anymore. Deran gets a call, cops are at the bar.

Deran goes to the bar, the feds want to talk to him about Livengood. Deran answers their questions, says that Livengood harassed him and now he has to sell tacos to pay rent. They leave their business card and say they will be in touch.

The boys meet with Frankie, Deran tells her it is going to be about two weeks, they can’t rush this thing. Frankie leaves and Pope tells Craig to pay attention. J says that the cops believe Livengood was killed by the cartel. Pope says they should pay Chadwick what he wants and walk away from him.

Smurf confronts Baz’s mother, tells her to shut up and sit down when she tries to talk. She says Max is dead and wants to know what he was running through her place. Smurf has a gun on her and tells her that what she did could have got her and her kids killed. So, from time to time she is going to do things for her, and she doesn’t want any problems.

Deran is at the bar, he tells the bartender he appreciates him with all the crazy stuff that is going on lately. He asks what really happened to Adrian, Deran tells him that he got popped. H’s not dead, he is hiding out.

Craig decides to stop doing drugs, he turns his dealer away. He sits down and looks at photos of his son.

J tells Deran they need a win, he says let’s do it.

Smurf arrives home and finds the kids camping outside, they are looking at stars in the sky. Andrew has a bandage on his hand, he burned himself with a lighter he took from the bar.

Pope is cleaning out his gun when J walks up. He tells J that he did good, Chadwick, Livengood everything went just like he said it wood. J said they got lucky and Pope says no, he was smart. Pope tells J that Pete never flushed the coke.