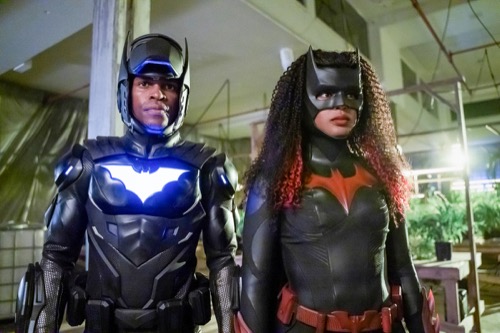 Tonight on the CW the series Batwoman airs with an all-new Sunday, October 13, 2021, season 3 episode 1 premiere and we have your Batwoman recap below. In tonight’s episode called,“Mad As A Hatter” as per the CW synopsis, “As Batwoman continues to keep the streets of Gotham safe, Batwing joins in on the action.

In tonight’s Batwoman episode the episode begins with two guys finding a hat down by the water. They take a picture of it and post it on a bidding site to sell it. They sell it, pack it in a box, and mail it off to the new owner, who puts it on the moment he takes it out of the box.

At the Markham Asylum, she is reading a postcard and we see many more that are addressed to Beth Kane all over her wall.

Batwoman is fighting some villains with Luke as Black Batman when his suit starts to fail him. Elsewhere, Mary visits Alice and tells her she graduates med school tomorrow and her dad’s one wish was that she visit Alice to make sure she doesn’t go over the deep end. Alice says she is fine and daddy is going to find a way to get her out of there. Mary laughs and says impossible, not from his cell in Metropolis. Alice tells her daddy has been writing her, she is not miserable. Before Mary leaves, Alice says she has one question for her about Ryan.

Ryan asks Luke why he froze up, he says the suit did, it glitches out sometimes. Mary returns to the Batcave and tells them that her father has become pen pals with Alice now. Ryan tells her that they won’t miss her graduation. Mary says Alice wanted to know about Ryan’s birth mom, she didn’t know what she was referring to. Luke says it is sick, Mary’s mother died in childbirth.

We see the new owner of the top hat, he is in the sewers taking a video of himself and saying that he can relate to Alice, who wouldn’t break after what she has been through. Two guys hear him and start laughing at him. He gives one of the guys a knife and tells him to kill the other one, he does. The guys start screaming, “what did you make me do,” and our new top hat owner says, “mad as a Hatter.”

Renee Montoya shows up at the scene of the crime and finds out the Mad Hatter is back! Meanwhile, Ryan, Luke, and Mary are watching video footage of the killing. Ryan says she doesn’t know what is more disturbing, that Mad Hatter posted the video or that Alice has a fanboy. Mary doesn’t understand how someone’s top hat can make a guy kill his buddy.

Luke says the original Mad Hatter was a neuroscientist who created mind technology to force people to listen to him, it was built into the hat. Luke says they have to get the hat off his head. Ryan looks at Luke’s dad’s note, he figured out how to disrupt the radio waves in the hat. They know the how and the what, they just need to know the where.

Ryan goes to see Alice and asks her what she is planning with her Mad Hatter superfan. Alice denies knowing him. They talk about Ryan’s mother, Alice is trying to insinuate that her mother did not die at childbirth. Alice tells her that it sounds like Mad Hatter is planning a tea party.

Mary is getting ready for her graduation, Ryan and Sophie are there. Ryan thinks Alice was lying about the tea party, just a way to get attention. Sophie asks Ryan what happened when she visited Alice, she says nothing. Ryan tells her that Alice said her birth mother is still alive and changed her name so she didn’t have to see her. Sophie tells her she will look into it for her.

The Mad Hatter is at the place where the graduation is being held, he is testing out the mic. Some men see him there and ask what he is doing, he tells them to gather around for a lovely afternoon of tea.

Sophie looks into Ryan’s birth and finds something that surprises her.

Montoya goes to speak to mayor Hartley, tells her the Mad Hatter is a copycat. The mayor doesn’t want to listen to her, she tells her she is thirty days into being a mayor and she is not going to panic the public for nothing.

Sophie and Ryan are at the graduation. Sophie tells her Alice was right, her mother doesn’t exist. The doctor who signed her death certificate also signed her birth certificate. Two months later he lost his license for unknown wire fraud, he had twenty-five patients in the days surrounding her birth. She looked into all of them and one came into the hospital the day before she was born. According to her medical file, she was suffering from a cyst on her ovary. She followed the money, she paid him 2 million dollars after her so-called emergency surgery. Her mom is still alive, she couldn’t find anything on her dad. Sophie hands her an envelope and tells her if she wants to know her name.

Mary is about to go down the stairs and she sees the Mad Hatter who tells her that she is the spitting image of her mother. Then, Mary is on stage and she starts talking about hypocrite oaths, everyone looks surprised, so does Sophie and Ryan who says this is not her speech. Ryan says it is not Mary speaking, Mad Hatter got to her. Next, she starts rambling about Alice, this is Mad Hatter’s tea party. The Mad Hatter comes on stage and tells everyone that the show. Is about to begin. He has a man laying on a table, the head of the University, and tells Mary to remove the guy’s organs one at a time, he is holding a scalpel.

Alice is in group therapy, she tells everyone that her father is going to use every last resource to get her out of there. The doctor tells her they have been through this before and nobody is coming for her. All of a sudden, the wall bursts open and Ryan is there, Alice wasn’t expecting her. Meanwhile, Mary is performing the surgery, but Black Batman is on the way to try and at least stall her before Ryan gets back.

Alice hides in a room and Ryan tells her that she needs her, Mary needs her and her father is not coming. Ryan tells her that her mind is playing tricks on her, her dad has not written to her. She has lost Ocean, Kate, her dad, and her mind is playing tricks on her, she gets it. Alice says he is coming because he promised her. Alice takes a look again at what she has posted on her wall and realizes they are not postcards from her dad after all. Ryan tells her that if she helps them, she can run and she won’t stop her. In the batmobile, Alice is just sitting there and is quiet.

Mary tells Sophie she can’t save him, she took out too many organs. Black batman has somehow disrupted the radio waves, but not for long, Mad Hatter gets it back. Sophie and Mary try to save the doctor by using the paddles to get his heart to start beating again. Mad Hatter is upset at the audience because he lost control of them for a few minutes and now has ordered them to strangle themselves. Just then, Alice walks in and Mad Hatter is surprised, she says she has to meet her number one fan.

She says she heard he threw a kitten off a rooftop, he is proud and says he had over five thousand views. Alice tells to tell the audience to stop strangling themselves. She tells him that if any of these people die they will have a reason to lock him up forever. He tells them to stop strangling themselves and to get out of there. The Mad Hatter hugs Alice and she stabs him in the back, gives him a word of advice, doesn’t ever meet your heroes.

Alice goes running off and Batwoman is there, she tells Alice she wasn’t going to really let her go. Alice tells her not to hate her because her family might be more screwed up than hers. Luke handcuffs Alice and takes her away.

Mary says her real speech to Luke, Sophie, and Ryan. Ryan tells Mary that she has probably saved more people than her in the city and she didn’t need an MD for the people to love her to know how good she is. They all toast. Luke leaves to see why his suit is crashing, otherwise, he says Ryan won’t let him be her wingman again.

Sophie and Ryan are sitting down, Ryan gives her back the envelope, she says she has all the family that she needs, she is good.

Mary’s birth mother finds out that someone has been fishing for data on her.

Luke is trying to fix his suit and is frustrated. The mask falls on the floor and he hears his father’s voice, who says he is his dad and will always know when he needs him.

Mary opens up a present from Kate, it is a doctor’s jacket with her name embroidered on it.

Batwoman meets with Montoya, who hands her a list of weapons that are in the Gotham River. She got the list from Alice, in exchange for her freedom. Montoya wants Batwoman to work with Alice to find all the weapons before some freak finds them. Montoya calls Batwoman by Ryan Wilder, she knows who she is and will tell everyone if she doesn’t agree. Batwoman says she doesn’t have a choice.