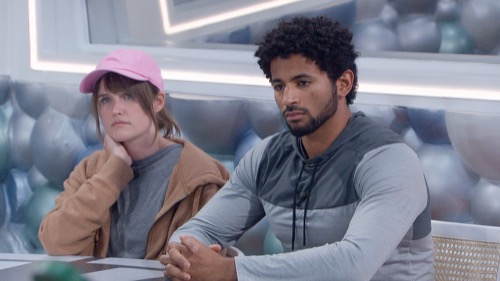 Tonight on CBS Big Brother 23 airs with an all-new Sunday, September 2, 2021, episode and we have your Big Brother 23 recap below! On tonight’s Big Brother season 23 episode 25 “Live Eviction and HoH,” as per the CBS synopsis, “Tonight on Big Brother it is another live eviction and either Sarah Beth and Kyland will be heading out.  Following the eviction, we will have an endurance HoH competition.”

In tonight’s Big Brother episode, the episode begins with day 58 in the Big Brother house and the Cookout’s plan to get all their members to the final six is coming closer and closer. Kyland and Sarah Beth are on the block. This week was a crazy week in the house, Hannah used her POV to get Xavier off the block because he is all about loyalty and trust.

Meanwhile, Tiffany is not letting Kyland derail her from her goal of getting Sarah Beth out of the house this week. Kyland knew this day was going to come, it is never good to be on the block on eviction night, but he knows this is going to get him closer to staying in the house to the end of the game.

Alyssa tells Claire that if Sarah Beth goes home this week she is the last white person, Claire laughs that she has already done the math and wonders if there is an alliance that she doesn’t know about – they all laugh but Xavier can’t believe that Alyssa said that to Claire.

Azah says it is a beautiful day in the Big Brother house, she and Claire are making dinner. Derek F. and Hannah are in the hammock and there is a beetle, he jumps out of the hammock and Hannah falls and bumps her head on the base. The commotion causes Xavier to run out of the kitchen, he goes to see what is going on outside and inside, the steak goes on fire in the oven, Claire runs for the fire extinguisher.

The Cookout meets in the bathroom, unbeknownst to Claire and Sarah Beth. Xavier is in the alliance and doing his part, but he plans on having the confetti land on him on finale night. Xavier meets with Derek F. and Kyland, he tells them that once they are down to the final six things are going to get a lot more cutthroat. Meanwhile, Derek F. knows that neither Kyland nor Xavier are taking each other to the final two, so he knows he is going to be the swing house guest who both want to take to the final two.

Kyland’s true final two is with Tiffany, but he is also very close to Xavier. Tiffany likes that Tiffany is going to be his final two, but she plans on taking Hannah.

Britini is in the jury house when Derek X. walks in, she is happy to see him but not happy that he is there. He shows her a video where Sarah Beth’s HOH. Xavier won the POV and Derek X. was backdoored. They then listen to the goodbye messages where Kyland reveals that there is a secret alliance in the house. Together they figure out that there is an alliance, and each of them has a duo with who they go up on the block to force their duo out.

Sarah Beth is sitting with Julie who tells her that she went from being HOH to being on the block and evicted in one week. Sarah Beth says she thinks the houseguests saw her as more of a threat. She says she doesn’t regret getting Derek X. out of the house, but she does regret making her relationship with Kyland so visible in the house.

It is time for the HOH competition and all the remaining houseguests are playing. This competition is circus-themed, on Julie’s go, they have to step onto a disk and hold on tight. They will then be raised into the air and the carousel will start spinning, and they will be slammed into Bubbles, an elephant. The last houseguest standing will be the new HOH. The first three houseguests to fall will be the new Have Nots for the week.

On Sunday, we get to see who wins this competition. Next Wednesday Zingbot is back and next Thursday, and the Thursday after there will be two double evictions in a row.

Derek F. fell off, he will be a Have-Not for the week. Alyssa is next to fall down and join Derek F.