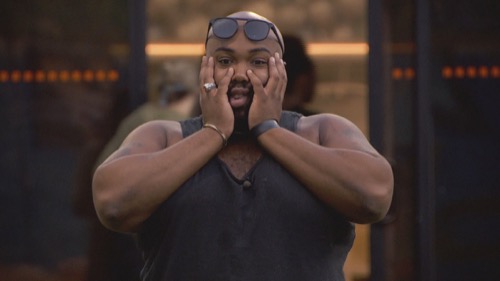 Tonight on CBS Big Brother 23 airs with an all-new Sunday, September 5, 2021, episode and we have your Big Brother 23 recap below! On tonight’s Big Brother season 23 episode 26 “HoH and Nominations,” as per the CBS synopsis, “Tonight on Big Brother it is the completion of the endurance HoH competition.  Following the competition, the new HOH will nominate two people for eviction.”

In tonight’s Big Brother episode, the episode begins with the HOH competition from the last episode, the houseguests are still in the physical competition vying for the HOH win. Kyland is still sad about Sarah Beth going home but he knows he had to do it for his game. Tiffany on the other hand is thrilled and says it is sweet revenge. Derek F. was the first to fall off the rope, then Alyssa, and Claire who threw the competition after 18 minutes. The first three that fell will be Have Nots this week.

Alyssa and Claire are the only two in the house who are not in the Cookout alliance. The Cookout really wants Claire gone this week. Hannah doesn’t want to take the shot against Claire and Alyssa so she falls and throws the competition as well. Xavier falls. Azah falls and she is disappointed. The last two remainings are Kyland and Tiffany. Tiffany wins HOH, Kyland fell down and Tifanny couldn’t be happier. Kyland is really confused why Tiffany fought so hard to get the HOH when it came down to her and him at the end, and she has already had an HOH, and they are in the same alliance.

Tiffany is trying to build her resume, she now has two HOH wins and plans on never landing on the block. Kyland thinks Tiffany being HOH creates a lot of risk in the game and he is really confused. Azah is having mixed feelings, Tiffany agreed that she wouldn’t take the HOH and she did. Alyssa is crying, she tells Xavier that she cannot go up on the block, do all the fakeness. Tiffany was supposed to go up as a pawn against her plus one, Claire. Xavier is also upset, she says that Tifanny is selfish and he is livid because now Alyssa is probably going to be the target and he will have to go beside her.

Tifanny and Claire are in the bathroom and both are thrilled that she won. Claire is probably the blindest player in Big Brother history, she still doesn’t get that she is on her way out of the house.

Tiffany’s winning does impact how Kyland feels in this game, he doesn’t think she is a team player. Tifanny tells the camera that she wants Claire to stay and she came up with a master plan. She starts dancing in front of the camera and says she is thrilled Sarah Beth was sent home. Derek F. feels shattered, he feels like the weakest player in this game. Azah tries to boost his confidence by giving him a pep talk. Derek F. says he feels like the fat kid in gym class and everyone is running laps around him. Azah gives him a hug. Hannah walks in and Azah asks her how she feels about the HOH. Hannah tells her that their target has to shift to Alyssa and she is fine with that.

Azah has had to put her personal game aside for the Cookout and she feels like Tiffany doesn’t do that and she is frustrated. Xavier says that Kyland and Tiffany are the same, they put their own personal games first and he is sick of it. Xavier goes to see Tiffany and tells her that the plan was to get rid of Claire, she says she was 50/50 and that never changed. Tiffany tells him that she doesn’t want to put him on the block. He tells her to do what she has to do.

Again, Tifanny calls in everyone excitingly to see her HOH room and in reality, nobody wants to see it but they all smile and give her their fake positive reactions.

Tiffany is in the diary room and she admits that she is playing the game for her, not the Cookout. She goes to speak to Claire and tells her that she thinks Xavier is throwing competitions. Claire tells her they should be careful, boys stick together. Tiffany goes to see Alyssa and says she likes winning HOH but she doesn’t like that she has to nominated two people, but it is a game. Alyssa then does some math with Tiffany about how if she would take her to the final two she would be guaranteed to win and Tiffany is intrigued.

Time for the Nomination Ceremony. Her first nomination is Alyssa, the second nomination is Xavier. Tiffany tells them that it is not personal, strictly a game move because they are strong players. The Cookout may have wanted Claire out this week, but Tiffany is there for her game and plans on continuing to play it the way she wants. This is the third week in the row that Xavier is on the block, he says because Tiffany is selfish.