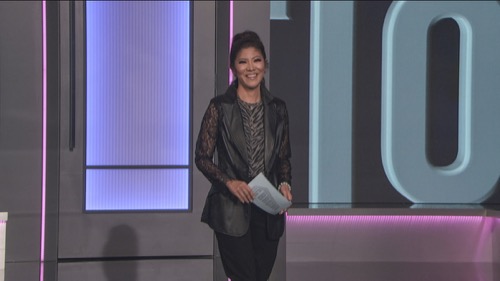 In tonight’s Big Brother episode, the episode begins with Derek F. feeling great, he is in the top four. But, he doesn’t like the Veto stunt that Kyland pulled by taking Xavier on the block. Azah can’t believe she is in the final four and winning her first HOH was amazing.

Hannah and she didn’t solidify a deal, she is best friends with Derek F. and Kyland has always had her back to playing with them is best for her game. Derek F. says that the boys pulled a fast one on him and he doesn’t like that he didn’t have a heads up on the Veto. Xavier voted out Hannah to show his loyalty to Kyland, but his loyalty is to Derek F., they have a final two. Azah is upset, she was forced to put up her ally and it makes her feel terrible.

Derek F. goes to speak to Xavier and tells him that what Kyland did with the Veto, makes him think that he has a final two with Kyland.

Azah calls everyone to the living room. The houseguests get a glimpse of CSI Vegas. With that being said, the houseguest will have to compete in a crime scene competition where they will have to dig deep to become the new HOH. Along with winning the HOH, they will also get to watch a pre-screening of the first episode of CSI Las Vegas.

Azah can’t compete in the HOH because she won the last one in the double eviction and she is afraid that she is the target.

Derek F. is the first one to enter the BB Crime Lab and it is epic. There is a bunch of evidence on the wall and a computer. The HOH key has been stolen from the BB museum and it is their job to find the clues. They have to collect the right clues and identify the primary suspect.

Derek F. figure it out but it does take him a long time. Essentially the houseguest who finishes in the fastest time will win the HOH. The competition is over, Derek finished with a time of 15:44, Kyland finished with 14:52 and Xavier finished with 10:18. Xavier is the next HOH. Anytime Derek F. has gone up against any of the houseguests he has lost and he is afraid that it is going to look like he is riding people’s coattails.

Kyland is disappointed, he knows he could have done better than he did. He trusts Xavier, but if someone else wins the Veto there is nothing he can do. Kyland is worried and Xavier thinks he should be. If he doesn’t win the Veto he just may be going home.

Xavier sits down with Azah and tells her that even if he puts Kyland up, he has to sit beside someone on the block. Azah feels worried, she has a feeling it is going to be her and Derek F. on the block. Xavier then sits down with Derek F. and plants the seed that he may cut Kyland this week, he is the stronger player between him and Azah. Derek F. has mixed feelings, he is close to Kyland and doesn’t really feel good about sending him home. Time for the Nomination Ceremony, Xavier nominates Azah and Kyland. Azah really feels like she may be going home, there is no plan B, she has to win the Veto to guarantee her place in the game.